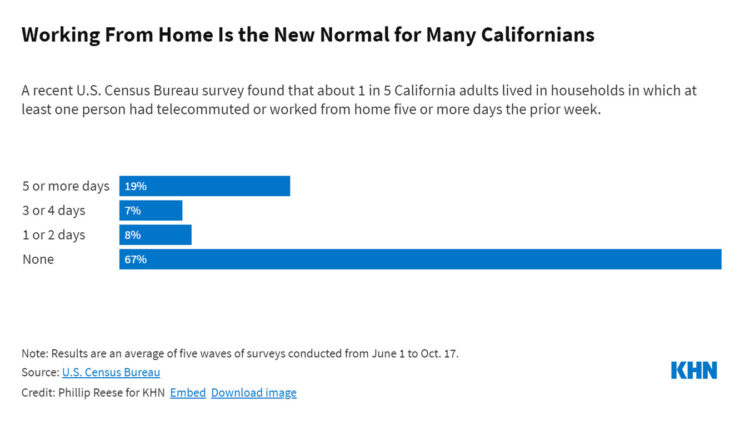 Even as pandemic lockdowns fade into memory, covid-19 has transformed California’s workplace culture in ways researchers say will reverberate well beyond 2022.

According to new data from the U.S. Census Bureau, working from home for some portion of the week has become the new normal for a large segment of Californians. The data shows high-income employees with college degrees are more likely to have access to this hybrid work model, while lower-income employees stay the course with on-site responsibilities and daily commutes.

At a basic level, that means low-wage workers will continue to shoulder greater risks of infection and serious illness as new covid variants sweep through job sites, alongside seasonal waves of flu and other respiratory viruses. Multiple studies have found that covid took its greatest toll in low-income neighborhoods, whose workers were deemed essential during early pandemic lockdowns — the farmworkers, grocery clerks, warehouse packers, and other service employees who continued to report to work in person.

In addition, researchers say the shift will ripple across the broader economy in ways big and small, as more employees have the flexibility to live farther from a job site and as workplace traditions like lunch outings and bar nights fade or evolve.

The U.S. Census Bureau interviewed roughly 260,000 Americans from June through October, including about 20,000 Californians, as part of a wide-ranging questionnaire called the Household Pulse Survey. Surveyors asked dozens of questions about pandemic-era lifestyle changes, including some about working from home.

The results mark a notable shift from previous Census Bureau surveys that asked about working from home, though in different terms. In 2019, before the pandemic, about 6.3% of employed Californians and 5.7% of employed Americans said they “usually worked from home.”

Researchers who specialize in workforce issues said the findings mirror their own and are indicative of a cultural upheaval that will outlive the pandemic.

Jose Maria Barrero is an academic economist and a co-founder of WFH Research, which is documenting the shift toward working from home. Before the pandemic, about 5% of workdays in the U.S. were conducted from home, according to his group’s analyses. In contrast, its surveys this year show that about 30% of working days in the U.S. are now work-from-home days.

The 2022 survey by the Census Bureau revealed disparities in the kinds of families that are adapting to hybrid work, mostly centered around income.

By comparison, just 15% of California adults in households with annual incomes of less than $50,000 said a household member had worked from home at least part of the week.

“It’s very hard for you to work remotely if you are a barista in a coffee shop or you’re working in a manufacturing plant,” Barrero said. “The sorts of jobs that people with low education tend to do are jobs that require them to be physically present.”

Racial disparities also exist. Nearly 45% of California adults who identify as Asian and 40% who identify as white lived in households in which someone worked from home some portion of the week, compared with 26% of Black adults and 21% of Latino adults.

The connection between income and hybrid work played out nationally, as well. States with greater portions of high-income residents tended to have more workers who reported telecommuting.

For example, fewer than 20% of adults in Alabama, Arkansas, Kentucky, Louisiana, Mississippi, and West Virginia lived in households in which at least one member had worked from home the prior week. The median household income in each of those states last year was between $48,000 and $56,000.

By comparison, 35% or more of adults in Colorado, Maryland, Massachusetts, Minnesota, New Jersey, Oregon, Utah, Virginia, and Washington lived in households in which at least one member had worked from home. The median household income in each of those states last year was between $71,000 and $91,000.

The gaps will have consequences.

Andra Ghent, an economist at the University of Utah who studies work-from-home patterns, said tens of millions of Americans are settling into “hybrid” arrangements, in which they work from home a few days a week and occasionally go into the office. Before the home-work option, she said, many didn’t want to live too far from the urban core, concerned that commutes would become unmanageable. But with routine daily commutes out of the picture, many will move to the suburbs or exurbs, where they will have more space, she said.

On the one hand, commuting less, particularly by car, is often good for the health of the environment, Ghent noted. “But if people move to places where the usual mode of transit is cars instead of something that’s more pedestrian- or cyclist-friendly or more likely to use public transit, that’s not such a good thing,” Ghent said. “It sort of increases our urban sprawl, which we know is not good for sustainability.”

When higher-income people move away, cities lose a valuable source of tax revenue. That could exacerbate challenges in urban areas, as resources for social programs and infrastructure shrink. To avoid that fate, cities will need to make themselves attractive places to live, not just work, Barrero said.

“What you don’t want to be is a city of basically office towers, and everybody at the end of the day leaves, and there’s nothing to do in evenings and on weekends,” he said. “Because that means that basically all of the people can be remote or hybrid.”

The migration to telecommuting also allows employers to look to other states or even other countries for hires. Tobias Sytsma, an associate economist at the Rand Corp., recently authored a report detailing how U.S. companies may increasingly “offshore” remote work to employees abroad.

In addition, higher-income workers could see their wages rise or fall, depending on where they live, Sytsma said. High-paid workers in San Francisco will compete for remote jobs with lower-paid workers in places like Fresno, California, or Boise, Idaho.

“So we should start to see these wages fall in cities like San Francisco and New York and Seattle, where they’re already really high,” Sytsma said, “and we’ll probably start to see them rise in more rural areas.”

Barrero said employers recognize that many people have found they prefer working from home — and that it gives companies leverage to ask workers to accept less money in exchange.

He said his research also indicates that today’s work models — for both at-home and on-site employees — are likely to endure for months and years.

“We’ve had in our survey a question asking people, ‘Is this the long-term plan that your employer has, or are you still waiting to implement part of the plan?’” Barrero said. “And consistently we get more than 80% of people saying that they’re already following the long-term plan.”

Phillip Reese is a data reporting specialist and an assistant professor of journalism at California State University-Sacramento.