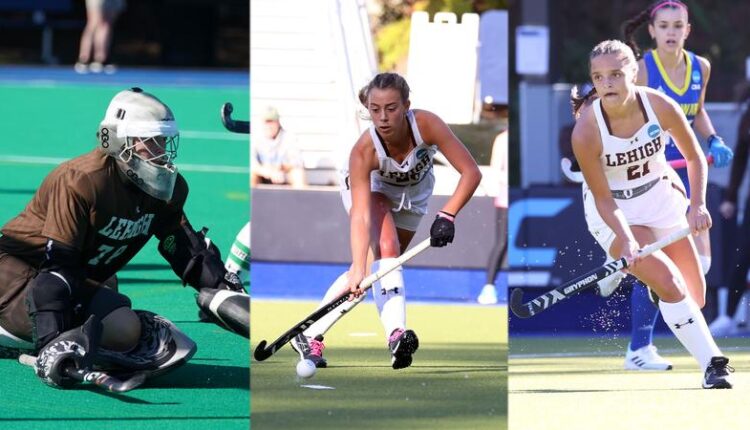 GENEVA, NY – Three members of the Lehigh field hockey program have been selected to the National Field Hockey Coaches Association (NFHCA) Division I All-Region teams sponsored by The Lineup on Tuesday afternoon. Senior goalkeeper Maddie Kahn has been named to the All-Mideast first team with senior Sarah Bonthuis and junior Julia Gatelein earning spots on the second team.

Kahn was an All-Patriot League second team honoree and was named to the NFHCA Senior Game, the first goalkeeper from Lehigh to achieve this honor. She receives her second NFHCA All-Region honor (Second Team, Spring 2021). Playing in 61 career matches, Kahn has amassed over 3,700 minutes in goal while making 362 saves, nine total shutouts and a career save percentage of .749. During her senior season, she started all 21 games, making 132 saves for a .754 save percentage with a 13-8 record. She was also named Most Valuable Player of the Patriot League Tournament, where Lehigh won its first title since 1994.

Bonthuis earns her second NFHCA All-Region selection (2021) and was first team all-league honoree after tallying 11 goals and assists for a team-high 33 points, including breaking the single-season assist record (9) which was previously held by the 2021 Defensive Player of the Year, Lenke Havas. A two-time offensive player of the week, Bonthuis led the Patriot League in points, is tied for first in game-winning goals (4), and sits tied for second in goals scored and second in assists.

Gatelein earns her first NFHCA All-Region accolade during a year that saw her record five points on two goals, one game-winning goal, and an assist while starting in all 21 games and earned her second all-league second team honor. Gatelein’s defense is what set her apart this season, the two-time Defensive Player of the Week has assisted the Mountain Hawks in three shutouts this season and caused challenges to the opponents getting the ball through the midfield.