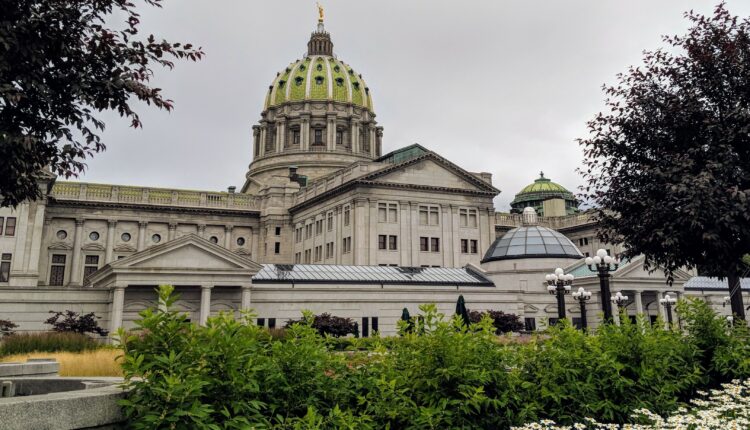 $40B Pa. budget revealed in Harrisburg; saves $5B in federal aid for future

(*This developing story was updated at 12:35 p.m. with additional details on education funding and comment from House Republican leadership)

Democratic Gov. Tom Wolf and the Republican-controlled General Assembly have reached a budget deal that spends three out of every 10 federal stimulus dollars the state has received, while socking away $2.5 billion in surplus state revenue for the Rainy Day Fund.

On top of the rainy day fund deposit, the budget plan calls for the state to hold on to $5 billion in unspent American Rescue Plan funding for future budgets. Those dollars must be spent by Dec. 31, 2024, and can be used for nearly anything, minus funding a tax cut or pension plan.

The $40.8 billion budget proposal, a 2.5 percent increase over current approved spending, was revealed Friday morning to GOP House lawmakers in a closed-door meeting. It matches the majority party’s long-stated priority: Save money for looming budget deficits.

“We wanted to make sure that we didn’t put the commonwealth in a position…that we can’ find education or fund social programs moving forward,” House Appropriations Committee Chair Stan Saylor, R-York, told reporters.

“There may be criticisms of us for not spending all that money now, but what about next year? What about two years from now?,” he added.

Republican leaders indicated that Wolf has agreed to the proposal. A spokesperson for Wolf did not immediately reply to a request for comment.

With a legacy at stake, Gov. Tom Wolf pushes for fair school funding

It also removes a regulation that expanded some low-wage workers’ overtime eligibility, a win for business groups, and it increases the cap for the Educational Improvement Tax Credit, which gives tax breaks to those who donate to cover private school scholarships, by $40 million.

Half of the federal relief spending set to be approved — about $1.1 billion — goes to the Department of Human Services.

That money will cover costs incurred during the pandemic, when millions of Pennsylvanians received public benefits, such as Medicaid. The costs of such programs are split between the state and federal government.

The plan also would spend:

Republicans framed the modest spending plan as a path to avoid their mistakes in 2010, according to a GOP budget summary shared with the Capital-Star.

That year, in his last term, Democratic Gov. Ed Rendell and the Democratic-controlled House spent all of the state’s federal stimulus money in one go. It then fell to incoming Republican Gov. Tom Corbett to either raise taxes to replace the one-time spending — or slash budgets.

He chose the latter, and was defeated by Wolf in 2014.

“Those who don’t learn from history are doomed to repeat it,” warned the GOP summary.

The plan comes after months of closed-door negotiations between Wolf and Republican leadership.

Wolf kicked off negotiations in February by asking for an income tax hike — combined with targeted exemptions for those making under $84,000 — to fund $1.3 billion in education spending.

That would have been enough to give every school district full funding based on an updated funding formula, created in 2015, that uses modern population numbers, and weights spending based on the local poverty level.

The big ask from the self-styled “Education Governor” came as Pennsylvania’s revenue projections were gloomy, and the state appeared to be facing a multi-billion dollar budget deficit. Still, Republicans were skeptical of any tax hike.

However, the federal stimulus plan passed by the Democratic Congress, and signed by President Joe Biden, dramatically reversed the underlying fiscal picture.

Instead of a gap between expenses and revenues, Pennsylvania ended up with $7.3 billion in federal stimulus money that it could use on everything from new social programs and infrastructure spending to replacing state revenue.

And in the end, buoyed by higher than expected tax revenues, Pennsylvania’s coffers ended up with a surplus of more than $2.3 billion. All told, lawmakers had a bit more than $10 billion in additional revenue to spend this year.

Legislative Democrats, in the minority, offered a broad spending plan for using the money. The details varied by chamber, but broadly, Democrats suggested using the federal stimulus dollars on everything from stormwater and road infrastructure to education to gun violence mitigation.

Those plans did not materialize in the budget.

“I think this budget isn’t exactly what we were hoping for, but it’s not as terrible as it could be at the same time,” state Rep. Ryan Bizzarro, of Erie, the House Democratic Policy Committee chairperson, told the Capital-Star.

The deadline to pass the budget is midnight on June 30, and a vote is likely to occur later in the day on Friday.