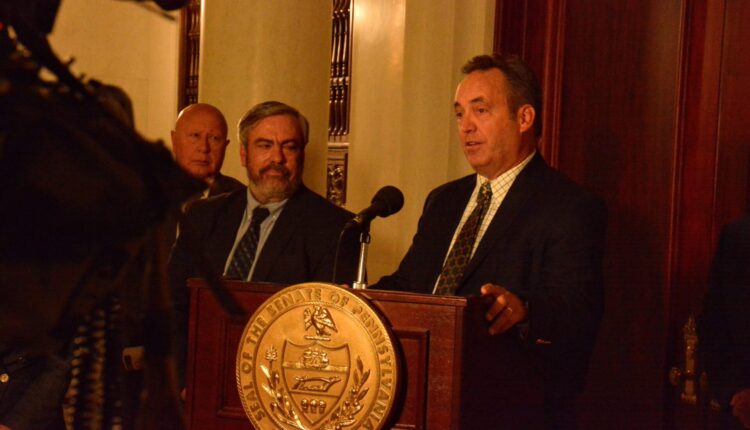 The spending plan for the fiscal year that starts July 1 only spends $2 billion out of the $7.3 billion in federal relief funds that were approved by Congress and signed into law by President Joe Biden.

In a statement released after the vote, Wolf said the state’s economy “has weathered the pandemic, and now is roaring forward. We are a commonwealth on the comeback. This budget will help our state move forward and rebuild a strong, equitable economy that works for Pennsylvanians.”

While legislative Democrats had pushed to spend the dollars on a broad spending plan, the Republican majority instead opted to save most of the excess cash, while approving a handful of tax credits for music performances and flight simulators.

$40B Pa. budget revealed in Harrisburg; saves $5B in federal aid for future

Of the federal money that is being spent, nearly half was used to cover increased state human services spending. The rest was used on a smattering of causes, including highway construction, nursing homes, and the state system of higher education.

“This year’s budget reflects resilience,” Senate Majority Leader Kim Ward, R-Westmoreland, said. “It’s not a statement of a new normal, but this is a declaration of rejecting restrictions and returning to life as we once knew it.”

The budget advanced out of committee in the House just before 4 p.m. It passed the full state House by a vote of 140-61 around 7:30 p.m. and then headed to the Senate, where it passed 43-7 after an hour of debate — sending it to Wolf’s desk.

Wolf’s office remained silent on the budget all day, as legislative Democrats grappled with the deal negotiated behind closed doors.

Democratic lawmakers who voted against the budget cited the restrained spending.

With a boost in federal stimulus funds, paired with strong state revenues, Democrats envisioned investing in education reform, roadways, and stormwater infrastructure, and helping businesses, families, and workers recover from the COVID-19 pandemic.

But those grand spending plans did not end up in the final blueprint. Instead, the main takeaway for the minority party was lost opportunity.

“We had a chance to do good, and we did nothing,” Rep. Sara Innamorato, D-Allegheny, told the Capital-Star.

“Not we — the majority party,” Sen. Katie Muth, D-Montgomery, added — describing the budget as a “failure.”

Some Democrats took solace in $30 million in violence prevention grants, or the $300 million increase in basic education spending. Of the latter, $100 million was targeted at the state’s top 100 least funded school districts. The proposal was authored by state Rep. Mike Schlossberg, D-Lehigh, before it was folded into the budget.

“There are certainly things that I don’t like, but at the end of the day, I’m not God, and I’m not going to get a budget that’s going to be perfect,” Schlossberg told the Capital-Star.

The formula will result in the Allentown School District receiving a $15.4 million increase in basic education funding this year. That’s an increase of almost 13 percent,  among the biggest per-district increases in the commonwealth, according to a House Republican analysis.

Looking at that increased state investment, his yes vote for the budget was “a no-brainer yes vote for me,” Schlossberg added.

“Those who fail to learn from history are doomed to repeat,” Senate Appropriations Committee Chairman Pat Browne, R-Lehigh, said on the chamber floor.

If the Legislature were to spend all the federal stimulus money, the state would be looking at a $7 billion hole in two years, Browne said. He added that the General Assembly can’t just look at the current fiscal year.

Amid budget negotiations, legislation that would make to-go cocktails a permanent fixture at Pennsylvania bars and restaurants stalled. A GOP spokesperson said the Senate will not advance the measure until the restaurant and outdoor dining measures can be kept in place.

The pandemic lifeline was initially expected to be signed into law until Senate Law and Justice Committee Chairman Mike Regan, R-York, tacked on an amendment that would have expanded the provision to canned cocktails.

Lawmakers this week also passed a 150-page election reform bill that Wolf has threatened to veto, as well as a smaller bill tweaking the state’s medical marijuana program.

With the budget approved, lawmakers will leave Harrisburg for the summer. When they return in fall, among their biggest issues will be redistricting, or the decennial redrawing of the state legislative and congressional lines.

Trading one pest for another: Goodbye, cicadas; Begone, spotted lanternflies! | Five for the Weekend