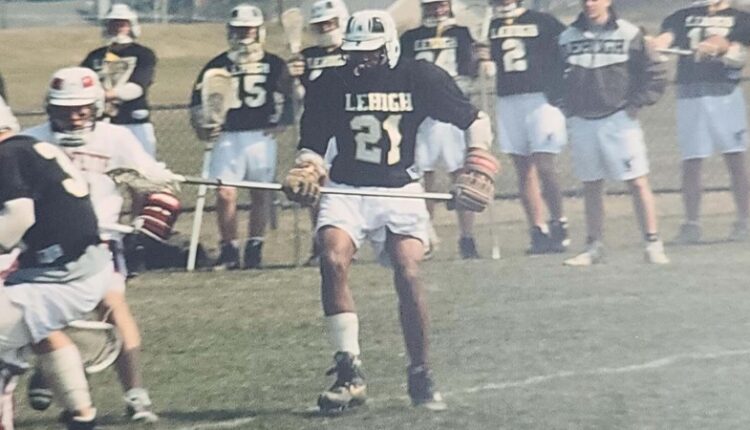 This created a valuable opportunity for Wilson to connect with the current team through Zoom.

“I posted something after the incident that caught Coach Cassese’s interest. He called me and we just talked,” said Wilson. “He asked me if, as an African American citizen, I would share my perspective and discuss how I felt about it and if I would raise any questions or perspectives from the players and coaches.

“We ended up having a really rich discussion, an open and honest discussion on a wide variety of topics related to racial relations in the country in general, to very specific at Lehigh and within Lehigh Athletics,” Wilson continued. “From my point of view it was a very positive interview.”

Wilson brings valuable perspectives to the subject as a black man who historically played (and is still engaged in) a predominantly white sport. For Wilson the sport emerged very late (relatively speaking), but has been a mainstay of his life ever since.
Wilson in Hillsborough

“I came across lacrosse essentially by chance,” he said. “I went to a high school that didn’t have lacrosse, but we added it in my junior year. A friend’s dad took us to an indoor lacrosse game. We got interested and found other high schools do A lot of the footballers decided to see if we could get a team, so we went around with petitions, went to the school board and presented them and then got a team approved. “

The team understandably struggled to start on the win-loss column, but starting a team was about more than just stats or records.

Wilson and his teammates were pioneers. (And Wilson was also a pioneer as a black student athlete in sports.)

“I didn’t even have a concept for lacrosse demographics at the time,” he said. “Because footballers helped start the lacrosse program, there were three African Americans on the team and our coach was also an African American.”

Lacrosse grew up on Wilson and he decided to keep playing in college.

“I went on in Lehigh,” he said. “The team has grown and got better than I was there. People asked how I found out about the game and how I got to know it.”

Similar to high school, Wilson wasn’t the only black athlete. There were two others on Lehigh when he came in as a freshman – T. Marc Jones and Wayne Bethea.

“I met Wayne and T. Marc on the Lehigh Challenge for Success summer program, where they brought in minority students early on to attend a class and learn about school,” said Wilson. “Because of these people, I had the advantage of knowing the state of the country. In my junior year, coach Brian Jenkins, who may have been the only African-American assistant coach in Division I, joined the program.

“In many ways, Lehigh created this environment where it was very comfortable to be a black lacrosse player, much more so than probably in many other places,” Wilson continued. “I took advantage of the Challenge for Success program, so I had black and Latin American colleagues that I already knew on campus and who didn’t feel isolated.”

Wilson had great teammates too.

“I came in with a great class and we kept getting better as a team,” he said. In Wilson’s senior year 1994, Lehigh won 12 games that were considered a program record for nearly two decades until the 2012 Mountain Hawks won 14.

After graduation, lacrosse remained an important part of Wilson’s life and actually opened the door to his current profession.

“After Lehigh, I worked in finance and a little bit in pharmaceuticals,” he said. “But I felt the need to do something different because I had started training youth lacrosse. That gave me the idea of ​​completely changing my career … so I switched to teaching and coaching.”

“When I had my second child, I stepped down from my head coach and focused more on the family,” he said. “I thought I was going to stay in the ranks of the assistant coach in lacrosse.

“Around the same time, there was an opportunity for Team Jamaica.”

The opportunity was to act as an assistant coach for the Jamaican national team at the 2018 Lacrosse World Championships. It was the first time that Jamaica took part in the World Games. Former Lehigh deputy head coach Errol Wilson has been named head coach and linked to a fraternity and friend in Mark.

“My father was born in Jamaica and Errol’s family is Jamaican too,” said Mark. “I worked at Lehigh summer camps for a long time and met Errol. We’d talk a lot about our Jamaican heritage and joke that we might be cousins ​​because we actually have a family from a similar area in Jamaica [and of course, the same last name]. “

When Mark heard that Errol was named head coach in 2017, he called him to congratulate him.

“I knew that lacrosse had been around in Jamaica for about a decade, but I didn’t know it was a world game,” said Mark. “I said to Errol, if there is anything I can do to help, please let me know. I was thinking about fundraisers or something, but he replied that he didn’t have a baton and asked if I was interested.”

It was an honor Mark accepted and went to work.

“We selected a team made up of Jamaican Americans and Jamaican players,” said Mark. “Lehigh was kind enough to use his facility and we had a great rehearsal with tons of great players. We had people like Goran Murray from Maryland and Hakeem Lecky from Syracuse. “We were able to put together an amazing squad and represent Jamaica at the Lacrosse World Cup in Britannia, Israel,” he continued. “It was an amazing experience.”

Wilson finds similarities between training the sport he loves and teaching it.

Wilson actually began his teaching career in Plainfield, where he is today.

“My sister-in-law worked in the district. She said they were looking for teachers and I could get my feet wet,” Wilson said. “I met with the middle school principal who said he had this class of boys that no one wanted to teach. At that time, you could become an emergency certified special education teacher in New Jersey who basically had nothing to bring people in to teach . “

Wilson took this class of boys and the rest is history.

“I made friends with the middle school football coach and started training football with him, putting the whole class on the football team and resolving discipline issues,” he said.

Whether he’s teaching high school, middle school, high school, or coaching the Jamaica team, the same passion lies behind everything Wilson does.

“If you can work with a student or player and get them to the point where they do something they couldn’t do before they met you, they’ll be satisfied,” said Wilson. “There is a selfish satisfaction that says, ‘I knew you could do it.’ And I believe the mentality comes from my experience with lacrosse. “ Mark with his father

“My son is three and has a stick,” he said. “I didn’t know what the game was until I was 15 or 16 and I definitely didn’t pick up a stick until I was 16. It was a lot of work and it never seemed like it was going to happen. When it finally did, there were a lot of it Coaches, great teammates and people who inspired me to take the next step.

“That’s how I feel when teaching and coaching.”

Wilson has influenced so many people around him, including the Lehigh men’s lacrosse team on that Zoom call last spring. The effect came from simply sharing his experiences with athletes and coaches in a place that means so much to him.

“I’m not with Lehigh every minute or anything, but I’m glad I’ve been part of the program and all of the different coaches,” said Wilson. “The stability of our sports department with Dean Sterrett and the culture that has been built around the teams is very positive. Lehigh has given me a lot and helped me every step of the way.”

Today Wilson is proud of Lehigh Athletics and what it stands for in all aspects, including diversity, equity and inclusion, and the department’s work on anti-racism.

“As a Black Alum, I definitely find the things you post on social media very valuable,” he said. “The video with all of the coaches was great (click here to watch it). I have proudly shared it with all of my friends on social media. It’s good to see the school adopt and adopt that attitude.

“I’ve always seen Lehigh as a place that is constantly growing and getting better and better.”

And it is people like Wilson who have played and will continue to play such an important role in that growth.

As part of Black Excellence Month in collaboration with Lehigh’s DEI Office, we are proud to present former sports students and color coaches. This week we’re sharing the story of Mark Wilson ’94 from @LehighLacrosse!

Check back on Wednesday to read the full story. pic.twitter.com/tEHNWPNeaE