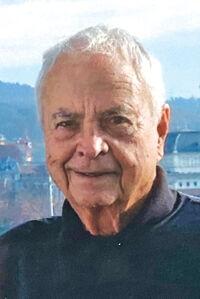 William “Bill” Snadecki died peacefully at home on July 4th at the age of 88, surrounded by his children. He was born in Bethlehem, Pennsylvania, to Clarence William Snadecki and Virginia Adams Snadecki.

Bill attended Lehigh University, where he participated in the ROTC program, played varsity lacrosse, and was a member of the Phi Gamma Delta fraternity. Upon graduation in 1954, Bill was hired by the Alcoa Aluminum Company and was immediately given leave to serve as a navigator on a B-47 in the US Air Force for three years. Bill returned to Alcoa in 1957, where he held several key positions in the United States, Switzerland and Italy and eventually became President of Alcoa’s operations in Brazil. In 1986 he returned to Switzerland to become President and General Manager of Alcoa Europe. Bill has made significant contributions during his 36 years at Alcoa and was grateful for the experience that enabled him to work with wonderful people and to travel the world.

After retiring in 1990, Bill moved to Old Lyme, Connecticut, where he sailed his Palmer Johnson 36 Brightside for several years and spent time with his growing family. From 1998 to 2001 Bill lived in Hilton Head, SC, and in 2001 Bill moved to Sun Valley, Idaho. He wanted to live in the mountains again because they reminded him of his beloved Switzerland.

Bill quickly became a Sun Valley native and was hugged by everyone. For many years he worked “on the mountain” as a ski patrol and later as a greeter for all visitors – the perfect job for him! During the summers he worked and played on the Sun Valley Golf Course. He gave back to the community through his commitment to the Presbyterian Church and Young Life. He served as a volunteer for the Wounded Warrior Project in Idaho, supervising business students in sales and management.

Bill will be remembered as an open-minded and incredibly positive person who was a dreamer and always interested in others. He loved traveling, eating, opera, flirting, building and designing boats, sailing, skiing and golfing. Most of all, he loved his family and never missed the opportunity to tell his children and grandchildren how proud he was of them. Bill has given his family an incredible adventure and is sorely missed. He leaves behind four children: Douglas (Nancy) from Marblehead, Massachusetts, Eric (Erin) from Beaufort SC, Jill from Pine Plains, NY, and Karen (Blake) from Valencia, California; also from the mother of his four children and ex-wife Patricia Simmons (Allyn) of Bluffton, SC. He leaves eight grandchildren: Haley (Nicholas), Andrew, Sara, Gregory, Bradley (Brianna), Molly, Emily and Cooper and a great-granddaughter, Everly.

A commemoration of life will be held in the Presbyterian Church of the Great Forest in Ketchum on Saturday, August 28th at 11 a.m. Afterwards there will be a reception in the community hall for friends and family. In lieu of flowers, memorial donations can be made to the Intrepid Fallen Heroes Fund at fallenheroesfund.org or the Fisher House Foundation at fisherhouse.org.

Analysis: Necessary or Not, Covid Booster Shots Are Probably on the Horizon