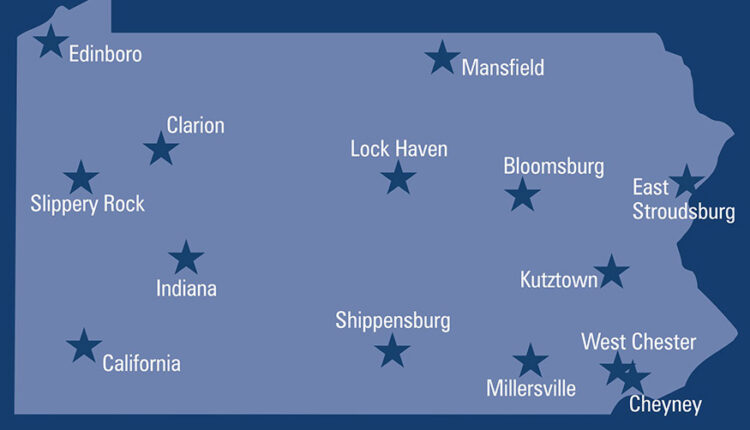 Will six Pa. State System universities merge? A vote is expected this month.

With a boost in state funds, the leadership at the Pennsylvania State System of Higher Education will decide this month how best to address system struggles — including a final vote on consolidating six universities into two, regional campuses.

Faced with sagging enrollment and stagnant funding, the State System has pushed for a redesign since 2016.

The most recent plan, which has faced backlash from students, alumni, and school faculty, proposes merging Lock Haven, Mansfield, and Bloomsburg universities into one campus, and Clarion University, Edinboro University, and California University of Pennsylvania into another.

Since May, more than 600 stakeholders have submitted written feedback on the proposed merger, and dozens of people have offered public comment during a series of hours-long board meetings, with the majority of participants speaking against consolidation.

According to State System data, enrollment at its 14 schools has declined more than 20 percent since 2010; meanwhile, tuition rates have increased.

State System Chancellor Daniel Greenstein, who did not respond to interview requests, has argued that the merger will allow the state schools to keep their campuses open, and provide students with an affordable education.

In March, he said that he would recommend dissolving the system altogether if the board votes against consolidation.

But this month — after a series of public hearings — the State System Board of Governors will finally vote on the proposed merger and decide how to use a $50 million boost in state funds, which is the first allocation of a $200 million, three-year commitment from the Legislature.

“Change is hard. We have as an entity, not as individuals, postponed it for years,” Greenstein said during Wednesday’s Board of Governors meeting. “That’s why we’re here. We did not get here overnight. This is not a surprise; this is what happens through inaction.”

The merger would result in lay-offs and some online classes to accommodate students spread out across the campuses. But after a year of virtual learning, students and faculty have said they would rather be physically in the classroom — citing a lack of learning retention and increased ability to cheat with remote instruction.

“What is being proposed is a quick fix of PASSHE as a whole, not the individual colleges, employees, or the communities they reside in,” an unnamed staff member and State System alumni told the board in written feedback. “Moving to a heavy online presence will not attract students … stick to the brick-and-mortar, which gives students the socialization they crave.”

Six Pa. State System universities could be consolidated. What to know ahead of four public meetings

All public comments on the consolidation plan can be viewed online, but meetings on the merger have been conducted virtually due to the COVID-19 pandemic, prompting some stakeholders to ask the board to delay a final decision until there has been an opportunity for in-person town halls and face-to-face dialogue with students and staff.

In a letter sent to Greenstein and Board of Governors Chair Cindy Shapira last month, state Sen. James Brewster, D-Allegheny, called for a two-year delay on implementation.

He argued that potential new federal dollars and state support could create a “path for bold and progressive action that does not involve consolidation.” He added that the merger should serve as a “wake-up call for the General Assembly to end years of neglect.”

State Rep. Scott Conklin, D-Centre, asked the board to vote against consolidation in a June letter, citing “unanswered questions” about the plan. The biggest “red flag,” Conklin said, is who will ultimately control the branch campuses.

Rep. Clint Owlett, R-Tioga, whose district includes Mansfield University, said the merger is a “step in the right direction.”

“Mansfield University is a vital part of our community, contributing to our local economy, and offering local students, and others access to a quality education, affordable education,” he told the Capital-Star. “With growing challenges facing higher education institutions across the state and nation, we must do all that we can to make sure rural communities like ours continue to have educational opportunities available.”

The final decision, however, is up to the Board of Governors, which includes representatives from the Legislature and State System.

Rep. Brad Roae, R-Crawford, who sits on the board has not said how he plans to vote, but during Wednesday’s meeting, praised how many opportunities there have been for public comment. He also asked for a breakdown to reflect how many came from State System school employees, who could be impacted by a merger, and non-staff members.

“There’s going to be a narrative out there that 80 percent of people are against this plan. Well, that’s because 80 percent of the people that testified worked there, and they’re concerned they’re going to be impacted,” Roae said.

“We can’t force people to make comments,” he added.

A spokesperson for Gov. Tom Wolf, a Democrat who has made education a top priority, said the governor has conceptually supported the State System redesign plan, as well as the proposed integration.

When Wolf signed the 2021-22 budget last month, he applauded the three-year commitment of $200 million in funding for the State System. The financial boost, he said, will help the board of governors plan for the future.

“Our state university system provides a world-class education that enables tens of thousands of students to achieve their dreams of a college degree and to build lives here in Pennsylvania,” he said in a statement. “This is an investment in the future of our students that will rebuild our state universities and make a college education more affordable and accessible to generations of Pennsylvanians.”

Board of Governors Chair Shapira said the boost in state dollars serves as a “vote of confidence” in redesign efforts but added the board will have to put them “to good use.”

“We know we won’t be able to address every single need to the extent possible; there is never enough resources in terms of time, talent, or treasure for that,” she said. “But we will tackle those that have the greatest impacts on our students, our faculty, our staff, and our other stakeholders.”

The governing board will meet on July 14 and 15; a vote on consolidation is expected on the afternoon of July 14.

Citing the Nellie Bly Scholarship, a victim of budget negotiations, Sen. Judy Schwank, D-Berks, requested that the board prioritize student scholarships and other options to make education more affordable. The July 15 meeting, Greenstein said, will be related to budget decisions.

“How we use money will be different depending on which path we go down,” he said.

What, to the slave, is the Fourth of July? | Frederick Douglass