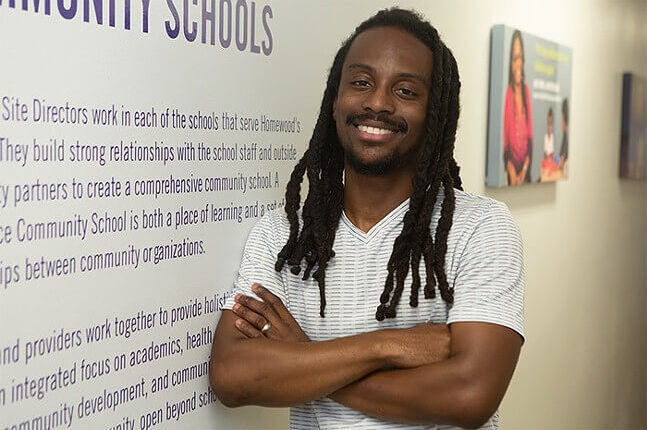 Homewood is a Pittsburgh neighborhood rich with history. It was once a popular destination for Pittsburgh’s wealthy elites during the 1800s and throughout the 1900s. It wasn’t until 1950 that things began to change, spurred by the phenomenon known as “white flight,” when upper and middle class white residents left Homewood after Black people began moving into the neighborhood.

The Homewood Children’s Village website attributes this change in part to the displacement of Hill District residents by the construction of the Civic Arena. This led to an economic downturn in the neighborhood, which saw a devastating population decrease — from 30,523 in 1960 to 6,422 in 2010, by HCV’s numbers — and an uptick in rental properties, as many new Black residents couldn’t afford to buy homes.

“There is so much richness in this community in terms of who’s here today,” Lewis said. “Like walking down the street, talking to your neighbors, getting to know people, we have artists, writers, we have leaders, executives, people working for all different kinds of industries, folks that are craftsmen and owners of their own business.”

When Lewis first moved to Homewood about 10 years ago, he discovered Rebuilding Together — a Pittsburgh nonprofit that helps to repair communities — and how the group was working on homes in the area. Lewis, who describes himself as a lover of film, decided to follow them with his camera and as a way to get to know his neighbors.

Originally from the Baltimore area, Lewis moved to Pittsburgh in 2009 to attend Carnegie Mellon University to study Computational Biology, after receiving his degree from Cheyney University in Delaware County. During his time at CMU, he says he felt like he was being pulled in two different directions: science and community work.

Lewis volunteered with the Homewood Children’s Village before being offered a position as a Program Coordinator in 2012. He slowly rose in the organization until becoming interim CEO in 2018, with the position becoming permanent six months later.

“The mission of the Homewood Children’s Village is to improve the lives of the children of Homewood and simultaneously reweave the fabric of the community in which they live,” Lewis said. “And for me, it’s a mouthful, but really what it means is we’re here to meet the needs of the children and the young people that we serve.”

He added that improving the lives of these children is not just about what happens in schools, but what occurs in the community as a whole.

Cradle to Career is a program Homewood Children’s Village designed to tackle this problem. The program involves community partners supporting children from early childhood to when they are preparing to enter the workforce. Some of the partners HCV works with are Trying Together, the YWCA and YMCA, the Pittsburgh Public School system, Higher Achievement Pittsburgh, and Operation Better Block.

Lewis said HCV is not interested in reinventing the wheel; there are many programs that exist in Pittsburgh to support children, so they want to partner with these organizations to create a holistic approach to wellbeing.

“Children don’t exist in isolation from the community, from their families, from their peer networks,” he said. “And so, part of that reweaving the fabric of the community means we support parents and family members. We support the other institutions in the community that make a community vibrant. And while we may not do all of that work ourselves, we’re deeply invested in forming partnerships with folks that do those other supportive programs and services.”

Some of the pressing issues facing the children of Homewood currently are related to poverty, which has been exacerbated by the pandemic. While some solutions have arisen, like moratoriums on evictions, the reality remains the same for many families, Lewis said.

“There’s not enough financial resources and opportunities to allow them to sustain the kind of lives that you need to sustain in order to raise healthy, happy children and families,” Lewis said. “So a lot of the issues, I think, stem from that kind of reality.”

While being the CEO of a nonprofit was not a part of his plan, he brings an important perspective to the work, he observed.

“My background is in computer science and computational biology. I was doing scientific research before I came to the village,” he said. “But I think that research mentality and that approach and that computer science approach has definitely aided me in my journey. I think about things a little differently as a computer scientist.”

Lewis added that his research background has helped him to realize just how much we don’t know about the world we live in, and this expands to working with children.

“If people had all of the answers to this stuff, all of the communities would have been transformed by now,” he said, adding, “The reality is we’ve got pieces of it.”

Ultimately, HCV and Lewis want to see the community and its residents uplifted.

And though it sounds cliché, it really does take a village and “what Homewood can become is limitless.”

Dani Janae is a reporter for the Pittsburgh City Paper, where this story first appeared.

Our streets are awash in guns. To stop the violence, cut off the supply of weapons with a 20-year ban on new guns | Opinion