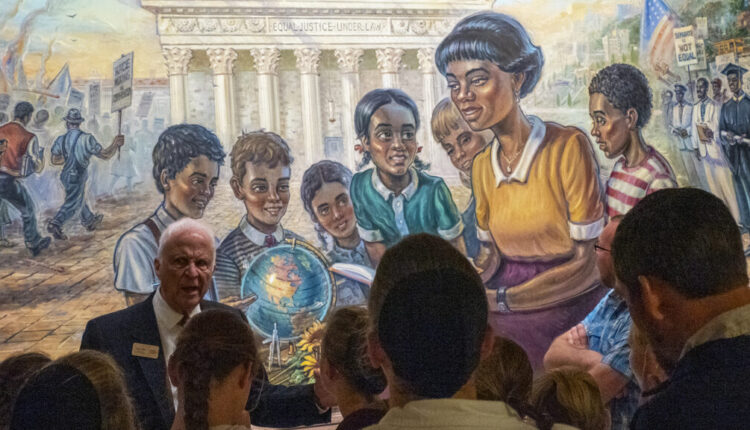 During a 2014 symposium marking the 60th anniversary of the Brown v. Topeka Board of Education decision, a statement from one of the plaintiffs offered what today feels like prescient insight. Many of the Virginia plaintiffs in the class-action lawsuit, feared integration and would have preferred separate and actually equal.

Many historians consider Brown one of the high court’s five most consequential decisions. The landmark ruling struck down 1896’s Plessey v. Ferguson ruling solidifying segregation in schools and the concept of “separate but equal.” Nevertheless, the opposition has persisted.

As we approach Brown’s 68th birthday, and the seating of the Supreme Court’s first female African American jurist, much of this age-old fight feels so familiar.

For many, the decision remains a proud moment for the nation, a moment where America not only aligned itself with its soaring egalitarian narrative, but where it also acknowledged a tragic failing it had long tried to keep hidden.

The columnist took these images at a 2014 symposium marking the 60th anniversary of the Brown v. Topeka Board of Education decision. His son Kirkland accompanied him for the event. (Mark McCormick/Kansas Reflector)

According to a news release about the symposium, convened at the University of Kansas, “in addition to establishing integration in public schools, the case was a significant step toward changing a broader dynamic of discrimination in the years and decades that followed. The ruling revolutionized the legal framework for race relations, extended the protection of equal rights to all and inspired oppressed peoples around the world to become advocates of freedom and equality.”

Langston Hughes once wrote, “America has never been America to me,” but for a fleeting moment, many in Black America thought America might finally “be” for them.

But that moment proved short-lived.

Theodore Shaw, the former head of the NAACP Legal Defense Fund, referred to Brown during his remarks at the symposium as “Hallowed, but hollow,” and said New York City schools were as segregated today as they were before Brown.

But then, there was John Stokes, one of the Virginia plaintiffs.

He explained to me and my son, whom I’d brought along, that Virginia plaintiffs made up 75 percent of the Brown plaintiffs and many of them, himself included, simply wanted school officials to honor their promise of “equal” schools.

Mr. Stokes said he knew the white, Southern, often government-sanctioned terror that marked the era would collapse on them as soon as they attempted to enter the schools. The thought of that terrified him, he said.

In our society, white resistance is regarded by many as patriotic (Jan. 6, for example).

Mr. Stokes did not underestimate the resolve. He’d seen it up close.

Proponents of these breathless claims have leveled violent threats at school board members, school administrators and classroom teachers nation-wide.

Meanwhile, white flight into wealthy suburbs created homogenous neighborhoods with housing costs beyond the means of most Black families, meaning schools there will resemble the neighborhoods. The spread of private, Christian schools invulnerable to Constitutional appeals to equality has continued.

All this, while claiming a wholesome innocence.

This year, according to The Grio website, of the 47 senators voting against Ketanji Brown Jackson’s appointment to the Supreme Court, 25 had voted for her less than a year ago for lower judicial positions. South Carolina Sen. Lindsey Graham had voted for her twice.

Jackson will have to wait until late June or early July to take her seat, but she’ll land on a court seemingly more hostile to civil rights and civil liberties than the Earl Warren-led Court that handed down the Brown decision almost seven decades ago.

Things have changed somewhat, but this environment still feels so familiar.

The Private Sector Steps In to Protect Online Health Privacy, but Critics Say It Can’t Be Trusted