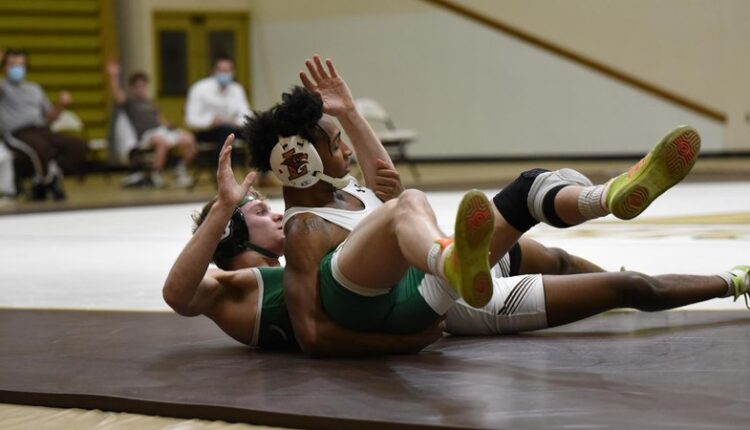 BETHLEHEM, PA. – Lehigh sent first or sophomore year wrestlers in seven of their first eight bouts on Saturday against Binghamton # 25, but the fifth year seniors, Jake Jakobsen and Jordan Wood competed when it mattered, closing the dual with one that all-important decision and fall to lead the Mountain Hawks to a 19-16 win over the Bearcats at the Leeman-Turner Arena at Grace Hall.

Wood, who returned three points behind after initial planning for an Olympic delay in the final battle, set Cory Day in the third half and led Lehigh (1-2) to his first win of the season. The Mountain Hawks were 16-9 behind after eight games before Jakobsen won a 10-0 win over Sam DePrez in 197 to bring Lehigh to 16-13 ahead of Wood’s exploits.

Doubles started out as a back and forth affair, with neither team being more than three points clear in the first seven fights.

Hines met Zack Trampe in 18th place and won 8-7 without the benefit of a takedown. Trampe scored the first takedown before Hines worked for a reversal and a two-near fall into a Petersen roll position and led 4-3 after a period. The fight was tied 5-5 after two periods, with Hines undecided at the beginning of the third round and taking the lead 7-5. Hines built up a solid driving time advantage and after a late reversal by Trampe, 1:07 of the driving time advantage gave Hines the victory.

The first official appearance for newcomer Luca Frinzi included two takedowns in the first period plus a takedown in the third plus an escape in the second period and 1:01 of driving time in an 8-3 decision over Chris Barker at 157, which is the Mountain Hawks on 9 brought -6 halfway.

The Bearcats reacted with three wins in a row and took the lead after 184 with 16: 9. Brevin Cassella beat Thayne Lawrence 10-6 in the second half and beat Thayne Lawrence with 165. Jacob Nolan put Binghamton 12-9 with a 5-1 decision over newcomer Connor Herceg (174) and senior Binghamton wrestler No. 5 Lou DePrez won a 13-1 decision over newcomer JT Davis (184).

Wood had built an 11-2 lead after a reversal to open the third period before using an assassin’s side headlock maneuver to pin Day at 5:54.

The doubles were followed by two additional fights, with Ivan Garcia von Binghamton defeating newcomer Drew Munch in the second round with 141 and Matt Kelly with 184 won 9-2 against newcomer Caden Wright.

The Mountain Hawks will be back in action on Sunday when they host the LIU at 1:30 p.m. at the Leeman-Turner Arena in Grace Hall. The game will be broadcast on Service Electric Network and streamed at Lehighsports.com/watch.