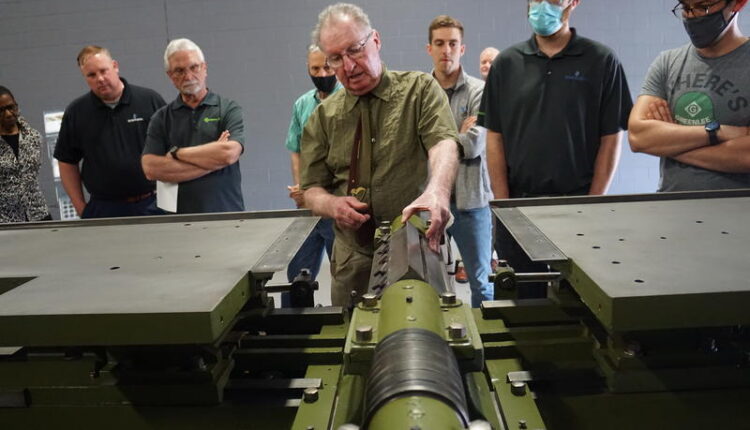 A machine built in Rockford more than a century ago is halfway to its new home in a national museum.

The 1910 Greenlee Variety Woodworker has 2.5 tons of ingenuity and represents the quality of manufacturing equipment the Rockford-based company has been known for since the Civil War. Just ask Steve Williams who rescued and restored the Variety Woodworker in rural Montana.

“It’s the best of the best,” Williams said during a layover at Greenlee headquarters in Rockford on Monday. “It’s an example of the best of this type of machine during the day. Most weren’t that complex. It looks damn good, don’t you think? And it’s the last one there is. ”

Williams accompanies the 1910 Greenlee Variety Woodworker from his home in Montana to the National Museum of Industrial History in Bethlehem, Pennsylvania. It’s been a long journey in other ways too, but Williams insists he loved every minute of the 1,500 man hours put into the restoration.

Williams is an exceptional woodworker and hobbyist. It was love at first sight for him as he pried open the custom-made box that kept the Variety Woodworker in a remote area of ​​a Montana farm for the past 40 years. The owner had bought the monster from the liquidation sale of the Anaconda Copper Company and then discovered that it was too much machine for his workshop. So he smeared it in lard to protect the iron, wrapped it up, and it sat there until he replied to Williams’ ad looking for antique woodworking tools. Williams bought it right away.

What is the 1910 Greenlee Variety Woodworker anyway? It is a machine used to cut huge wood samples. The Anaconda Copper Company needed precise patterns for their massive gears for mining operations around the world. The wood samples were pressed into sand and molten iron poured into casts. Anaconda used the Greenlee woodworker for 70 years, kept it in pristine condition and never altered it. Williams said it still has its original fasteners. Even so, it took him several years to fully restore it before he created the color that was the “Greenlee Green” of that time.

A piece like this belongs in a museum – if you can find one that can handle such a daunting undertaking. And Williams found the right home for his baby: The National Museum of Industrial History, a Smithsonian subsidiary in Bethlehem, Penn. It is slated to arrive on Thursday May 27th, where it will connect with other massive industrial machines on the museum floor.

The Greenlee Project found a suitable benefactor to fund the restoration – Emerson Electric Co., now Greenlee’s parent company. Emerson’s vice president of human resources for professional tools, Lloyd Everard, was one of the dozen of employees who attended the celebration on Monday at Greenlee headquarters in Rockford. For him it was an amazing connection to his company’s past. “A lot of these machines were melted down during World War II so they didn’t exist,” he said. “I’ve only seen pictures of it in a catalog.”

The separation from the machine, with which he has spent every free moment in recent years, will not be bittersweet for Steve Williams – it will be downright sad. But it won’t spend too long handing on its woodworking holy grail to its new owners. The pilot and Vietnam vet has his next project in mind – the restoration of a 1948 Cessna 140 that he can fly around his home in Kalispell, Mont., The gateway to Glacier National Park.