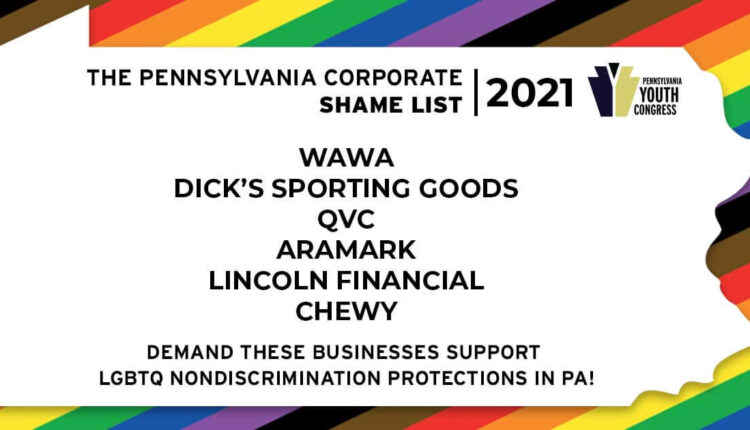 PHILADELPHIA –In June, as corporations donned rainbow merchandise and updated their logos for Pride, the Pennsylvania Youth Congress was sending a message: companies who celebrate Pride month must do more to help pass LGBTQ nondiscrimination legislation in Harrisburg, and if they don’t they will be called out.

“Corporations and leaders that use LGBTQ people as marketing props through rainbow-themed marketing campaigns or press events, without taking any meaningful action to fight for us or use their political capital to address the urgent issues of our time, will no longer have our support,” the organization said in a statement. “There are many large businesses operating in Pennsylvania that claim to support LGBTQ inclusion yet have refused to support, or chosen to remain silent on, the civil rights of LGBTQ people.”

Various iterations of the Fairness Act, which would provide protections for LGBTQ people statewide against discrimination in housing, employment and public accommodations, have been introduced in Harrisburg for decades, but none have passed.

The most recent bill was reintroduced last month by state Rep. Dan Frankel, D-Allegheny. However, the Republican-led legislature, specifically the committee on state government where the Fairness Act has been referred, is unlikely to bring the bill up for debate or a vote.

The companies called out by PYC for refusing to publicly support the Fairness Act include Wawa, Dick’s Sporting Goods, QVC, and Chewy. When the Philadelphia Gay News contacted the four companies, Wawa reiterated its support for LGBTQ employees but did not take a position on the legislation, while the latter three did not return requests for comment.

In most regions of Pennsylvania, an employee can work for an LGBTQ-friendly business but still be denied housing or public accommodations when they are not in their workplace. Local nondiscrimination laws only cover around 3 percent of Pennsylvania’s 2,562 municipalities, leaving LGBTQ people in large swaths of the state without legal protections.

The PYC campaign calls to light the difference between supporting LGBTQ employees only in the workplace or supporting them in their full lives.

“Several companies operating in Pennsylvania have made the decision to adorn their social media in rainbows or invest thousands of dollars in colorful seasonal apparel, yet decline to publicly back the most basic of civil rights for LGBTQ people,” the PYC said in its statement. “These companies want credit for supporting LGBTQ people and the money of those who support us, without doing the work. Many of them think if they throw up a Pride flag, they never have to use their political, social, and financial capital to actually stand with LGBTQ people…. How can companies claim to be LGBTQ allies, when they are refusing to publicly state that LGBTQ people should be treated with dignity and respect under the law?”

In addition to calling out the businesses refusing to support the Fairness Act, PYC, which is the only statewide LGBTQ youth advocacy organization, also recognized the businesses which have signed on in support of it, including Hershey, PPG Industries, PNC, and Erie Insurance. Since PYC launched the Pennsylvania Values campaign to coordinate public support and pressure the General Assembly to pass a nondiscrimination bill, over 65 businesses have signed on.

Preston Heldibridle, the organization’s executive director, said that the PYC has seen benefits from its work during Pride month.

“We have seen results since we put out our Pride Power and Corporate Shame Lists,” Heldibridle told the Philadelphia Gay News. “Just recently, Lincoln Financial signed on to support statewide nondiscrimination protections in PA! The company has a history of supporting LGBTQ+ people internally through their company policies and LGBTQ+ Business Resource Group, and made the decision to sign on after PYC posted several tweets calling on them to publicly back the effort for statewide protections. We fully support Lincoln Financial’s decision to join this unprecedented coalition of Pennsylvania businesses and employers calling for this vital update to our statewide nondiscrimination law.”

In addition to Lincoln Financial’s decision, Aramark, who had also been previously called out by PYC, has begun discussions with the organization on the company’s potential support of the Fairness Act.

Heldibridle also said that public support for the Fairness Act is there, and the hope is that with more widespread support from businesses, the state legislature will be pressured to take action.

Jason Villemez is the editor of the Philadelphia Gay News, where this story first appeared.