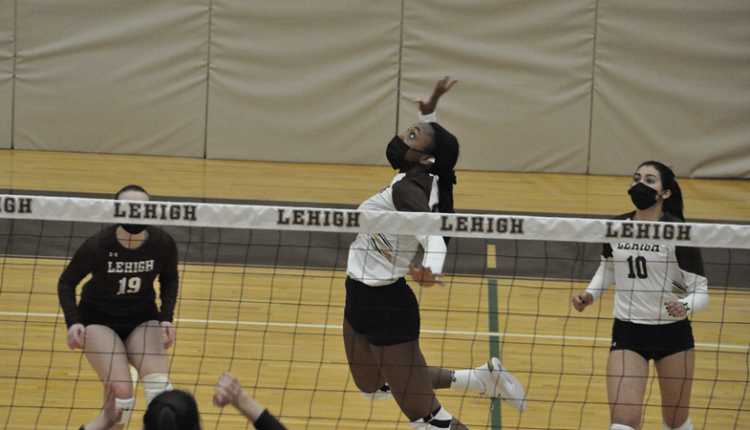 LEWISBURG, Pennsylvania – It took a few weeks longer than expected, but the Lehigh volleyball team secured their first win of the 2021 spring season, coming from behind to the top of Bucknell, 3-1 (23-25, 25-23, 25- 22, 25-20) on Friday evening at Davis Gym. The win results in a four-game losing streak for the Mountain Hawks as they make their fifth winning decision over the bison from the 2017 season.

Just like Sunday’s against Lafayette, it was another dominant performance by Seniors Hannah Wright and Sabrina Lancaster, who together scored 38 of the team’s 62 kills that night. Wright held her career high of 20 kills on Friday night as Lancaster added 18 and freshman Lylah Washington also stood out at 13.

“I think we have adapted and adapted much faster today than in the past,” said head coach Alexa Keckler. “Our hitters found different ways to score and that made a big difference offensively.

“Both [Hannah and Sabrina] played like the seniors tonight. They did their very best to keep calm, it was once again clear that as experienced players they played with a lot of will to win. They were out there accepting nothing but a victory. I think that really helped push everyone else and made a huge difference tonight. “

Lehigh and Bucknell played head to head for most of the first set and didn’t really give in on either side as the Mountain Hawks locked the set at 12 after an offensive error by Delanie Lewis. The bison dragged on some separation after sacking three points in a row en route to a mini 5-2 run to take a 16-13 lead. Lehigh got hot by scooping six points out of seven to take a 22:20 lead, but the bison responded by winning four of the last five to get the 25:23 win in the first set and an early 1: 0 lead to get.

Like most matches and the way it goes up and down, the Bison had most of the control over the first part of the second set, but the Mountain Hawks controlled the second half when they returned from an 11-8 deficit and a 19:18 lead took over after scraping six out of seven points. Hannah Wright took Ally Thaw’s pass to toss the bison in Set 2, 25-23 to lead the match 1-1.

The Mountain Hawks took complete control of the third set, expanding the lead to as much as eight points at 20-12, letting Bucknell come no closer than two points the rest of the way. The bison felt Lehigh with a match point at 24-19 but was able to get closer thanks to three points in a row, but Wright put him down for the 25:22 win and the 2-1 lead.

Despite trailing 2-0 early in game four, Lehigh quickly found that he could never fall behind for the rest of the set, make the most of the bison late, and use two Wright kills to end things 25 -20.

The Mountain Hawks hit .274 as a team for the game, including .270 in the fourth to claim victory. Lancaster scored .349 with 18 kills and seven digs, Sophie Robinson scored .385 with six kills and a total of eight blocks, while Alina Lam, 31 and Sarah Burau, 20, scored a combined 51 assists. Lam also finished the double double with 18 digs. Ally Thaw, who made her first appearance on Libero, was solid, recording 23 digs that night.

“I think we just have to keep passing and serve well and serve offensively, we have to defend ourselves faster,” said Keckler. “Tonight was a big step for us because we made adjustments much faster and messed up our offensive. It was a big turning point for us in terms of the way we played in the last four games.”

“I have a feeling that as long as we keep improving and playing with a little more courage and fire, like we did tonight, that should lead to continued success.”

Lehigh looks forward to continuing his winning streak against Bucknell at 4pm on Sunday from Grace Hall. This game is streamed live on ESPN +.