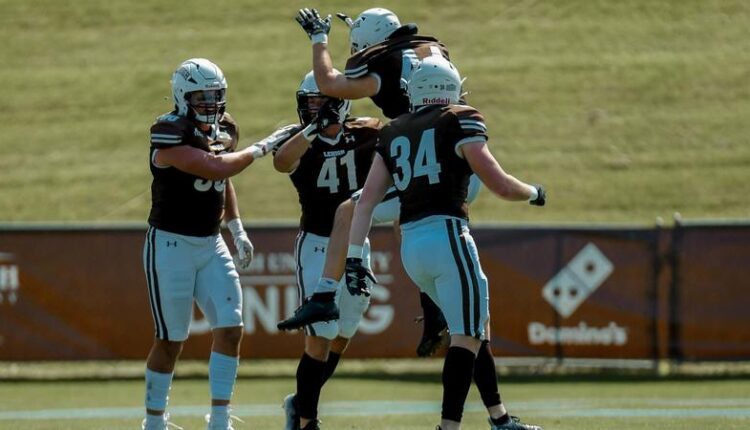 BETHLEHEM, Pa. – Lehigh returns to the road, looking to bounce back after dropping his home opener to Richmond, as the Mountain Hawks travel to Princeton Saturday for the first of two games against Ivy League opponents this season. Game time is set for 3 pm from Princeton Stadium. The Mountain Hawks got a 77-yard touchdown pass from Dante Perri to Zaythan Hill to get within 20-6 of Richmond, but the Spiders scored the final 10 points to claim the 30-6 victory. Lehigh’s defense limited Richmond to just 49 yards rushing but the Spider defensive held the Mountain Hawks to just 203 yards of total offense. Princeton shared the Ivy League title with Dartmouth last season and opens its home schedule on Saturday after defeating Stetson 39-14 last week in its season opener.

Senior running back Zaythan Hill provided the offense for Lehigh against Richmond, hauling in a 77-yard touchdown pass from Dante Perri that at the time brought the Mountain Hawks within 20-6. For Hill, it was his first career receiving touchdown and his 12th touchdown overall. It was also the first of the 12 to come against a non-league opponent. Hill has had a knack for big plays during his time in the brown and white. His 77-yard touchdown catch against Richmond and 60-yard rush at Georgetown are Lehigh’s two longest plays from scrimmage this season. Hill also tied a Patriot League record with a 94-yard touchdown run as a first-year at Fordham in 2019.

Lehigh has 26 first-year student-athletes on its roster and recent history shows that many will be relied upon to contribute right away. Eight first-years appear on Lehigh’s depth chart (page 10) with wide receiver Geoffrey Jamiel and offensive linemen Aidan Palmer and Langston Jones currently penciled in to start. Ten first-year Mountain Hawks have seen action in Lehigh’s first three games including three starters on offense (Jamiel, Palmer and Jones). Twelve of Lehigh’s 18 sophomores appeared in at least one game during the 2021 season, led by defensive backs Logan Jones and DJ Lawrence who appeared in 11 and nine games, respectively, and made multiple starts in the defensive backfield.

One of Lehigh’s strengths last season was its ability to get to opposing quarterbacks. The Mountain Hawks ranked second in the Patriot League with 25 sacks and registered at least two sacks in nine of their 11 games, with a season-high of four against Holy Cross. The Mountain Hawks were held sackless at Fordham but had 13 over their last four games. Lehigh utilized a balanced attack with Mikhari Sibblis leading the way with 4.5 Trevor Harris following with four. The Mountain Hawks return players that accounted for 20.5 of their 25 sacks. Lehigh has six sacks in his first three games. Senior Nate Norris and junior Sam Sheridan both have two, while juniors Mike DeNucci and Donovan Lassiter joined Sheridan in picking up sacks against Richmond.

Coming off a 9-1 season and an Ivy League championship in 2021, Princeton opened its 2022 campaign with a 39-14 win at Stetson last weekend in DeLand, Fla. The Tigers fell behind 14-7 before reeling off 32 unanswered points. Ryan Butler rushed for 67 yards and two touchdowns and named Ivy League Rookie of the Week on Monday. Princeton’s defense allowed 178 yards on Stetson’s first three drives of the day, then yielded just 65 the rest of the way. Blake Stenstrom made his first start at quarterback, completing 23-of-33 for 256 yards and a touchdown. Joseph Bonczek had six tackles and 1.5 tackles for loss to lead the defensive effort.

This is the 62nd meeting in the series, with Princeton leading 42-17-2. The Mountain Hawks have won 13 of the past 19 matchups, including five of the last eight. Princeton has won the last two games at Princeton Stadium after Lehigh won the previous two meetings in New Jersey. These two teams met for the first time in 1887. Tom Gilmore is 0-1 against Princeton and 17-24 against Ivy League opponents as a head coach.

Saturday’s game kicks off just after 3 pm from Princeton Stadium. The game will be streamed on ESPN+ with audio coverage on Fox Sports Radio 94.7 FM and 1230 AM in Easton and online at LVFoxSports.com beginning at 2 pm

The Mountain Hawks will return to Goodman Stadium for their next two games, beginning next Saturday when they host Monmouth, the third of three CAA opponents on the 2022 schedule, on Dog Day, presented by JFR Salvage. Game time is set for noon. Lehigh will then return to league play when the Mountain Hawks host Fordham on Oct. 8th.