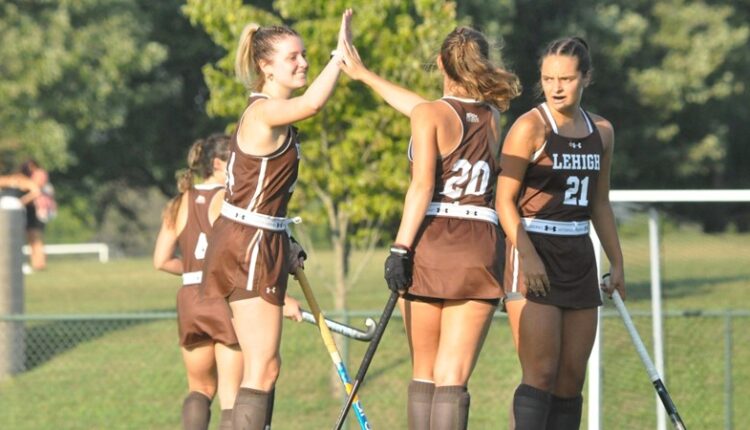 BETHLEHEM, Pa. – The Lehigh field hockey team will be back on Ronald J. Ulrich Field this weekend for a pair of games. Patriot League play begins next Saturday in Boston and to prep for that, the Mountain Hawks will host La Sale and Wagner this weekend. Lehigh will host La Salle Friday at 6 pm and Wagner Sunday at 11 am Both games will be streamed on ESPN+.

The Mountain Hawks (1-3) went 1-1 on their midwestern swing, downing Ball State 3-1 for their first victory of the season on Sept. 3, before falling 4-0 to No. 22 Ohio State the following afternoon.

Lehigh captured three Patriot League weekly awards with senior Sarah Bonthuis (Offensive Player), junior Julia Gatelein (Defensive Player) and first-year Kiki Mes (Rookie) all recognized. Bonthuis scored three of Lehigh’s five goals this season, while Gatelein tallied her first of the year in the win at Ball State. Senior Maddie Kahn has played all 240 minutes in goal this season and has made 23 saves with a .622 save percentage.

La Salle enters Friday’s game at 2-2. The Explorers won their first two games of the season and have dropped their last two, including a 3-1 loss at LIU on Sunday. Tatum Johnson leads La Salle with three goals and seven points in four games. Ryan Curley has played every minute so far in the goal cage.

The Explorers hold a 19-15-2 edge in the all-time series and have won the last six meetings, including a 4-3 decision last year. Lehigh’s last win came by a 4-3 score in overtime in 2011.

Wagner is 2-1 on the season and will host Cornell on Friday before visiting Lehigh on Sunday. The Seahawks opened the season with wins over Hofstra and Yale before falling at UMass-Lowell on Monday. Kira Mordvinov has scored two of Wagner’s four goals, while Daisy Rhule has played every 200 minutes in goal.

The Lehigh-Wagner series is knotted at 1-1 with the Mountain Hawks winning 5-1 in 2019 and Wagner winning 4-3 last year. Sunday’s game marks the first meeting between the two sides in Bethlehem.

The Mountain Hawks will open Patriot League play next Saturday (Sept. 17) with a visit to Boston University and then will visit Sacred Heart the following day.

Many Preventive Medical Services Cost Patients Nothing. Will a Texas Court Decision Change That?