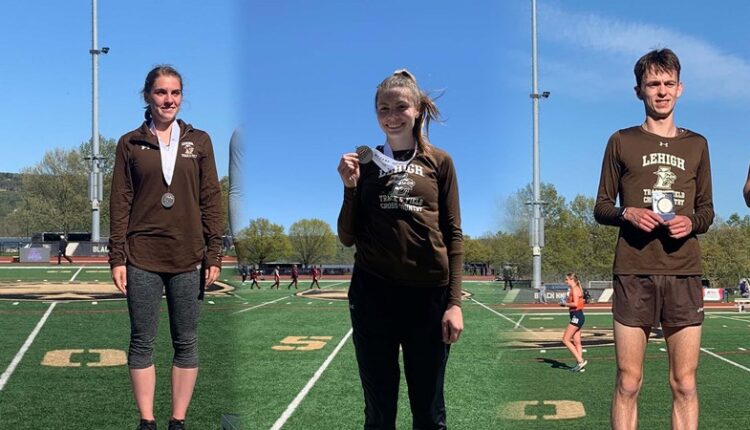 WEST POINT, NY – The men’s and women’s athletics teams of Lehigh completed the Patriot League Outdoor Athletics Championships 2021 on Saturday. The men’s team took fourth place with 59 points. Fourth place is Lehigh’s best place for the men since the 2012/13 season. The women’s team finished fifth with 52 points, nine points behind Bucknell in fourth place. The Navy Midshipmen took the crown home on either side. The women’s team collected 295 points, while the men’s team dramatically won the last event (4×400) and took the title with 298 points.

“I am very proud of our seniors, not only for the efforts they made this weekend, but also for the difficult year and their entire career,” said head coach Matt Utesch. “We had a number of goalscorers, some people on the podium and four All-Patriot League performances in both programs. This team has shown resilience, overcoming adversity and representing the browns and whites in the right way.”

The Brown and White made a variety of phenomenal appearances on the final day of the events. Day two began with the completion of the heptathlon, and Senior Maddy Harding jumped three places to second overall with a total of 4,859 points in the last three races, falling just 13 points behind the gold medal. The senior broke her PR score by almost 400 points. Harding started the day with 623 points in the jump, then won the javelin with a mark of (36.93) and finished the heptathlon with a fourth place on 800 m (2: 27.42). The Mountain Hawks also received major points from Bree Smentkowski. Smentkowski finished seventh in the heptathlon with 4,197 points after finishing fifth in both the shot put (10.38) and the javelin (31.12).

HERE COMES HARD !! Maddy is now second in the heptathlon after winning the spear (36.93). Harding is within striking distance of the leader on the way to the final (800 m). #GoLehigh pic.twitter.com/qjcyU4AISw

Maddy Harding .. That’s the tweet. Harding finished second in the heptathlon with 4,859 points. ArdHarding has destroyed their previous PR of 4,474 points. # GoLehigh pic.twitter.com/SOOvW749Xf

Harding wasn’t the only woman to achieve this silver medal, as senior Kaja Skerlj’s remarkable time (who competed in her first SPS) of 1: 01.98 gave her the shiny silver medal. Skerlj’s time was a PR for her and brings her to the 400mH for the fourth time in school history. Another silver medal finish was the Man, the Myth, the Legend, Connor Melko. Yes, Melko dazzled in the 5 km run and came second with a time of 14: 25.35. Melko walked back and forth with Army’s Marshall Beatty to get the win but just couldn’t overtake him. It won’t be long for Melko before he replaces that silver medal with a gold medal.

This is one hell of a effort on the part of Connor Melko. The second year finished second in the 5K with a time of 14: 25.35 #GoLehigh pic.twitter.com/JiKu43YF9G

Another impressive excursion came from Kerry Perna and Calista Marzolino in the high jump today. Perna, the first year athlete, recorded a PR and bronze medal by finishing third with a mark of 1.66m. Marzolino also posted a 1.66 m mark but noted it on her third attempt. The newcomer rebuilt the 1.66 m on her first attempt. Both women tried the 1.69 mark but hardly missed it. In the men’s obstacle race, distance runner Nick Norton took third place and won a bronze medal. Norton’s time was recorded at 9:03:36 AM.

The first of many medals in her career for Kerry Perna ? # GoLehigh pic.twitter.com/pJlgSwqq4Z

Nick Norton finished third in the obstacle race with a time of 9: 03.36! ? The men’s team keeps collecting points. # GoLehigh pic.twitter.com/ahA8ptCUfj

In the men’s 1500m, Sean Brown, reigning champion, finished sixth with a time of 3: 54.14. Another Mountain Hawk to take sixth place was Michael Nardelli in the 110mH. The junior’s time came at 3:07 p.m. Four Lehigh athletes reached seventh place in the finals of their events with Brett DeWeese on 100 mH (14.99) and Amondo Lemmon on 400 m (50.41). Brittann Pierce took seventh place in the high jump after 1.93 m. In the women’s obstacle race, newcomer Andrea Miller was the first Mountain Hawk to take seventh place with a time of 11:19:11.

Both the men’s and women’s 4x100m relay team achieved fourth place for the browns and whites. For the men, Matt Solomon, Samuel Tapera, Nardelli and Lemmon finished with a time of 43.38. The women’s relay team composed of Alexis Smith, Camari Griffin, Morgan McConnell and DeWeese won a medal and had a time of 48.35.

Next, some Lehigh athletes will return to Army West Point for the Army Twilight Meet this coming weekend.

PRs FROM DAY TWO OF THE SPS

The Hotel Bethlehem takes its guests back to the Gatsby era

Lawyer labors in the Allentown Catholic Diocese for LGBT community