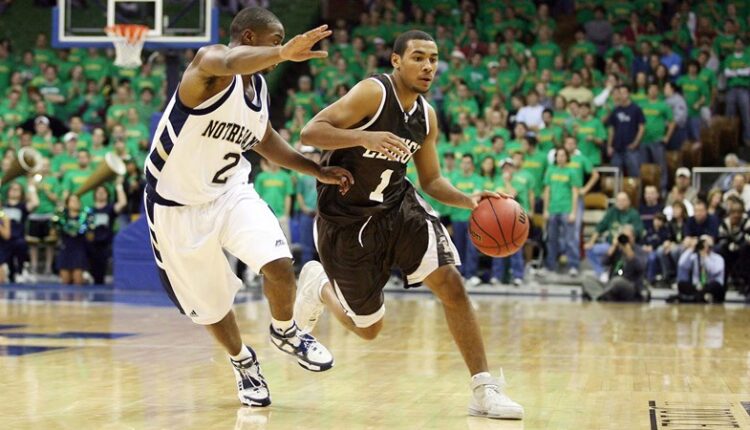 During the 2020-21 school year, Lehighsports.com will catch up with several ex-Mountain Hawks under head coach Brett Reed who have played professionally. We continue with the Marquis Hall ’10.

Basketball has always been a big part of Marquis Hall’s life.

And the Lehigh graduate did not have to give up that after Lehigh in 2010.

Hall was fresh from a Patriot League championship as a senior and played professionally for three seasons. A connection from his playing days led to a position at Nike Basketball, and Hall has since worked with NBA players as a Nike agent.

“After Lehigh, I went to Denmark,” said Hall. “I got there just after Christmas so I didn’t start the season with the team. I didn’t know what I was getting myself into, but it was a fun experience. I was excited to get the chance to continue my season.” Careers overseas. “

Hall’s second and third professional seasons were in Iceland and Finland, respectively.

“All cold Scandinavian countries with a lot of snow,” he said.

A strong college career led Hall to play professionally. He was successful as a Mountain Hawk from day one and won the Patriot League Rookie of the Year as a freshman.

“As a junior, you start figuring out the next steps,” Hall said. “Do I want to pursue this? You are preparing to enter the world of work or play abroad and take the steps you need to take.”

When he came overseas for the first year, Hall was as prepared as possible, but the adjustment still posed challenges.

“Being away and being alone is a mental game,” he said. “You don’t know what you’re getting yourself into. Someone you’ve never met will pick you up at the airport thousands of miles from home. You just have to trust that you are in good hands.”

This trust has paid off.

“I had never played football before, but sometimes football is the warm-up because it’s huge there,” Hall said. “You learn and embrace the culture. If you embrace those things and try to learn new things in the country, it will make the experience a lot better.”

Hall’s experience on the pitch was also strong. Hall, who graduated from Lehigh as the absolute assistant leader of the program (… since he was broken by Mackey McKnight and then by Kahron Ross), grew even stronger overseas.

“My game has actually expanded,” he said. “I feel like I’ve gotten a lot better. I just focused on basketball. This is your job and this is your career. I was able to refine my skills and add things to my game.”

Hall was one of several Mountain Hawks from his day who played professionally. He credits the Lehigh men’s basketball program with a lot.

“You look at all the different things that we have [at Lehigh] Do this – whether it’s conditioning, agility, individuals on the court, or team success – all of you prepare for professional basketball, “he said.” What a better example than CJ [McCollum] Who is Great in the NBA? Not just him, but so many people who have played overseas.

“There’s definitely a tradition at Lehigh.”

The great thing about taking a Lehigh education is that even when professional basketball comes to an end, a fulfilling career outside of playing is usually not difficult to come by.

“I played in Finland and was injured,” he said. “I hurt my patella, so I was out for about a month. I played well, but while I was outside the team brought in another American. I wasn’t 100 percent when I came back so they made me go to let.” “”

Hall stood at the crossroads, wondering if he should keep playing.

“I played well, came up with the numbers, but didn’t get the opportunity I needed,” he said. “It was just before Christmas. When I got home, I was focused on getting well and deciding if I wanted to take the chance to find a new agent (Hall’s previous agent had left).” In the end, Hall had another opportunity that he couldn’t pass on.

“I was wondering if I wanted to take the risk and keep playing and pursue this dream or pursue a once-in-a-lifetime opportunity which is Nike Basketball,” he said. “It was in Portland. As a basketball player trying to make a career it didn’t get much better. When I weighed my options, it seemed like a no-brainer.

“I went ahead and hung up the shoes,” Hall continued. “I had a good run.”

The Nike opportunity would not have arisen without Hall’s experience of playing professionally.

“My trainer (Erin Cowan) did a lot of photo shoots for Nike Basketball and asked me to help him out,” said Hall. “It was a pretty big shoot. That’s how I got to know the people I work with today. We kept in touch and when a job came up they had me in mind.”

Hall began his first year as a temp but was quickly elevated to the role he now works as a sales representative. He started in Portland but has lived in Dallas since 2015.

Much of Hall’s job is relationship building.

“I am basically managing this relationship between the athlete Nike and the athlete’s agent,” he said. “When guys are in town I connect with them, get me dinner. I might have some gear for them, but maybe not, but it manages that relationship, goes to games, keeps up and makes sure they get by a Nike serviced perspective. “

Relationship building is a skill hall developed during his time at Lehigh as the captain and leader of his team and within the athletics department.

“Dealing with people and trying to figure out different personalities definitely carries on,” he said. “But at the end of the day it’s basketball. How I used to interact with my teammates – Zahir, Matt, Dave, CJ, Gabe – is how I interacted with some of the guys in the NBA. Obviously, they’re on another and higher skill, but basketball is pretty much the same language. “

Another area that prevailed and evolved in Lehigh during Hall’s time is his desire to give back.

“At Lehigh, I was part of COACH (community outreach of athletes who care about helping),” he said. “One of the big events has always been Adopt-A-Family, so I want to make sure that our team raises as much money as possible for the family we sponsored over the Christmas period. [Director of Community Relations] Roseann Corsi was amazing; Whatever she needed from me, I was happy to help. “

Today Hall continues to give something back, including helping the Erin Cowan Foundation.

“Erin was my mentor, training me and helping me get into the Nike position, but he actually died,” Hall said. “He was very big in the Portland community as a mentor, father and coach. He coached a lot of players – men and women – was an agent and had many connections. He took me under his wing.

Working closely with Erin’s family, Hall helped start a scholarship on his behalf and give back to the Portland community.

“I’ve been thinking about how to give something back because so many people have done so much for me,” he said. “It was a total team effort with Erin’s wife and daughters, one of my good friends Seth Tarver, and many people in the Portland community.”

Corsi couldn’t be more proud of the impact Hall continues to have on his community.

“I am very proud of the Marquis,” she said. “I remember the day he called to tell me. I got emotional and he really brought tears to my eyes. I was just so proud of him. I know he has a passion helping others, and he continues to give back as he did to Lehigh. “ Whether COACH or the Erin Cowan Foundation, Hall’s motivation to give something back to the community is easy.

As Corsi said, “I know the Marquis said he was just trying to be a good person, but let’s just say that … He’s a good person with a big heart.”

And Lehigh played an important role in the man who is Marquis Hall today.

“Your college days really shape you,” he said. “You learn who you are during those college days, and a little bit later. In those college days you learn real lessons whether they are good, bad or ugly. Just like we lose three times in a row Patriot League tournament to yourself.” Asserting yourself once and for all and winning a championship are things you cannot teach.

“There will be a lot of losses, but you have to keep pushing.”

Hall has overcome losses in his life to enjoy a hugely successful career in the sport he loves.

“On the pitch I was a competitor who wanted to win what prevailed in my game days,” he said. “Outside of court, I’ve always tried to make sure I’m a nice, humble person and try to help wherever I can. Smile, say hello, and be a good person no matter what.

“I” is someone who continues to be so admirable at Lehigh University in everything he does.

Men XC ready for the doubles against Loyola (Md.) On Saturday