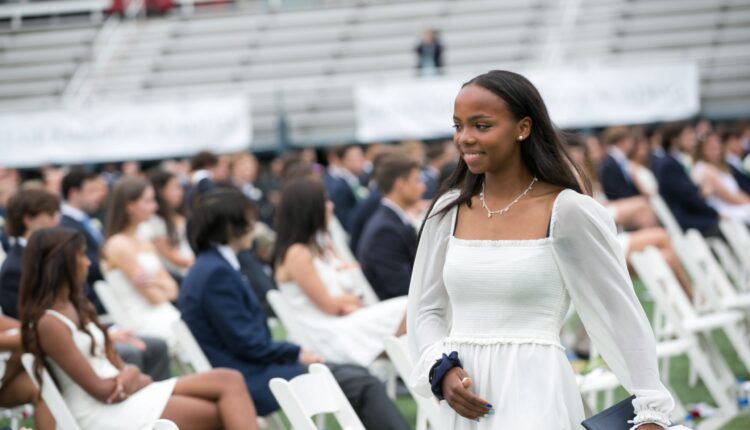 Montclair Kimberly commencement was first on campus since 1950s

Kelsey Freeman, vice president of the Montclair Kimberley Academy’s student government, receives her diploma after providing comments and reflections on her time at MKA. (Courtesy of MONTCLAIR KIMBERLEY ACADEMY)

The Montclair Kimberley Academy graduated 113 seniors at the campus Van Brunt Field on Sunday June 13 – the first opening ceremony held on campus since the 1950s.

In his welcoming speech, senior high school principal David C. Flocco praised the class of 2021 for “not only helping us to be the community we are today, but also helping us to better endure and emerge from this pandemic when we entered it. ”

Flocco urged students to remember school as a home away from home that they will always be welcomed to, and to reflect on “the memories and community that this home will bring with you Head that will never be “leave you.”

Kelsey Freeman, vice president of the student government, told graduates that their lives at MKA are measured not by academic achievement, but by “unscripted and unpredictable moments that remind us of who we are and lead us on the paths we should always follow . Senior Jonah Barbin urged his classmates, “Get out there, be confident, take risks, and be the special people I know.”

Headmaster Thomas W. Nammack said he found inspiration and perspective in the work of student writers and artists in the latest publication of the literary magazine Stylus for high school students. He told the graduates that “what I have seen from you and the community in the past 15 months” [of the coronavirus pandemic] proves that you, we are all part of an extraordinary school. “

Student Government President Isa Luca and High School President Nate Corbett officially closed the ceremony with the ringing of the Academy Bell, which is nearly a century old. Honorary degrees were awarded to Nammack, who served his 16-year tenure as headmaster and will be replaced by Nigel Furlonge, and to George Hrab, an MKA faculty member who is retiring after his 52nd year at the school.

More from the 2021 graduation in Montclair