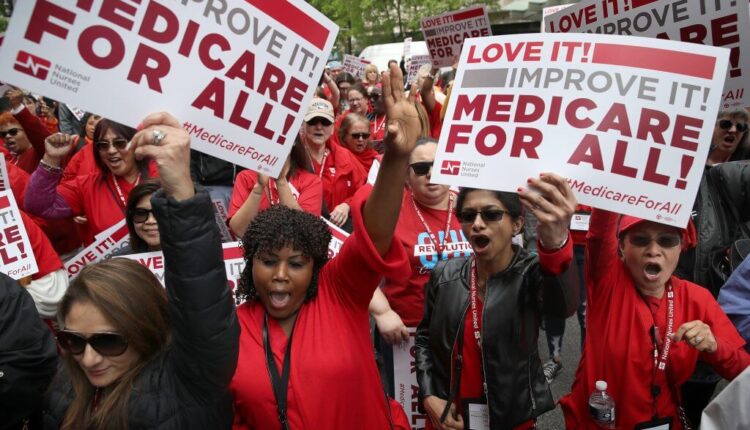 There has not been a lot of serious discussion about the federal budget in the past four years. Republicans who used to fret about deficits and urge the passage of a balanced budget amendment were not about to raise those concerns while tax rates were being reduced for the wealthy, while Democrats argued for more spending on various social programs.

Now that Joe Biden is President and Democrats sort-of control Congress, rumblings about how much the federal government is spending are beginning to emerge from hibernation. Some of the handwringing from Republicans is from fear of taxes being raised a tiny bit on their wealthy donors, while others are once again worried their efforts to limit government services for the non-wealthy could be thwarted.

Such a scenario should mean it will not be long until Medicare becomes a topic of conversation once again. Most of the recent discussion about Medicare came in the 2020 Democratic Presidential primaries when the call of “Medicare for all” was a rallying cry for a number of candidates.

That notion was lost in the midst of the pandemic and the attempts to deny President Biden the office to which he was elected. It may still be a top-of-mind cause for many progressives, but before there is an attempt to expand Medicare there needs to be an effort to ensure the core program continues to exist.

The 2020 Medicare Trustees report indicated Medicare will be able to pay in-patient hospital expenses (Part A of Medicare) in full until 2026.

At that time the trust fund will be depleted, and payroll taxes will only pay 90 percent of its costs. Meanwhile, Medicare Part B, which pays for out-patient care and doctor visits, now relies on funding from the federal budget to supplement the monthly premium of $144.60 that enrollees pay.

Universal coverage, single-payer, ‘Medicare for All’: What does it all mean for you? | Analysis

The trustees ominously note “the rapid growth (in) costs will place steadily increasing demands on both taxpayers and beneficiaries” in the future while also observing “the projections and analysis in the 2020 reports do not reflect the potential effects of the COVID-19 pandemic on the Medicare program.”

The general public, especially those over 65, may feel Medicare as it currently exists is a government program worth rescuing and expanding, especially given the dramatic improvements in life expectancy and the health of older Americans since its enactment in 1965.

But that opinion is not necessarily shared by many Republican elected officials, who fought the creation of the program and have worked to fundamentally change it over the past 55 years.

The concept of Medicare as government-provided health care for older Americans had an immediate hole punched in it at its birth, when the insurance industry successfully fought to ensure that Medicare only covered 80 percent of health care costs, meaning enrollees needed to purchase “supplemental” insurance from private insurers.

The insurance industry continued its efforts to play a bigger role in Medicare over the years. The creation of Medicare Part C, better known (cleverly) as Medicare Advantage, saw insurers signing up Medicare enrollees for plans where Medicare paid insurers to cover health care costs for individuals.

Finally, the establishment of Medicare coverage of prescription drugs, Part D, was given over completely to private insurers with the added component that the government would not negotiate the costs of prescription drugs with pharmaceutical companies, allowing the drug makers and the insurance companies to work their own deals.

Insurers have worked hard to make Medicare Advantage popular among those eligible for Medicare. By signing up for a Medicare Advantage plan, not only do enrollees not need to worry about supplemental insurance, but often they can receive vision, hearing, or dental coverage, or have a gym membership included.

The biggest selling point, however, is many of the plans have little or no premiums, unlike a supplemental plan.

How do the insurers do this? First, Medicare Advantage operates as an HMO, limiting choices of physicians and medical facilities. But more importantly, insurers receive a set fee for each Medicare Advantage enrollee, adjusted for the health risk of individuals, a cost which has been increasing over the past few years.

It is past time to shore up Medicare’s finances and reverse the drift toward its privatization. The program was created to ensure older Americans have access to adequate health care, not to be a windfall for the insurance industry at taxpayer expense.

After the chaos of the last four years, many issues must be addressed at the federal level. Medicare is one of those which should be acted upon sooner rather than later.

Black Americans are more likely to be harmed by high drug prices. How one Pa. lawmaker is trying to help | Tuesday Morning Coffee