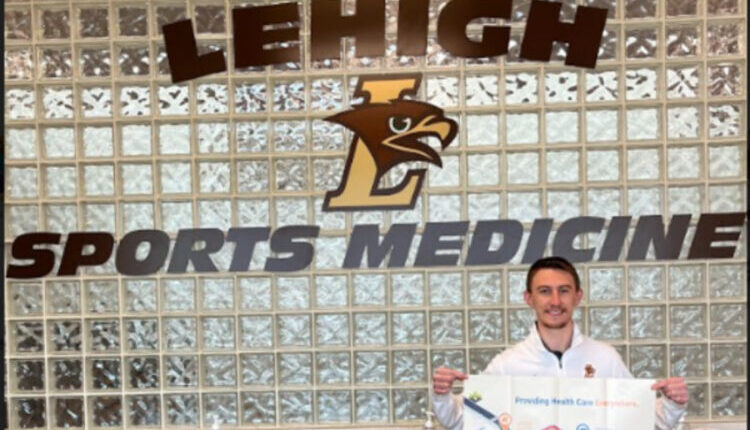 (Editor’s Note: This is part of a series of stories written by Lock Haven University graduate students about their athletic training full-immersion externships this spring.)

The first seven weeks of his rotation was spent exclusively at Lehigh University, where his primary sport assignment was men’s basketball. Time was also spent in their sports medicine clinic and providing medical care for women’s basketball home games and men’s lacrosse practices. He also spent time at Rothman Orthopedic Institute in Philadelphia, working in their orthopedic urgent care facility.

Lehigh University is an NCAA Division I institution located in Bethlehem, Pennsylvania. They are a member of the Patriot League, competing against schools such as Lafayette College, Bucknell University, Boston University, Army and Navy.

Kupetz started assisting their men’s basketball team in early January, where he got to cover daily practices and home conference games. He was able to gain experience with multiple lower extremity injuries and managing concussions.

A new aspect of concussion screening he was able to learn was a software called BrainCheck and King Devick cards, two tools used when deciding if the athlete is cleared to start their return to play. A general medical condition he saw while working with the men’s basketball team was a case of food poisoning. “I learned how to manage the athlete’s condition during the game to ensure he did not become dehydrated,” Kupetz said.

In Lehigh’s athletic training rooms, most of the equipment they had was similar to that at Kupetz’s previous clinical rotation locations. Their sports medicine department had recently obtained grants, which they used to purchase new Dynatron Series 5 Channel Combo Units, Schwinn AirDyne Exercise Bikes and Theraguns.

While working with the men’s basketball team, Kupetz learned how to utilize skill-related components of fitness for injury prevention. Some examples included using speed ladders for agility, single-leg foam pads with dribbling for balance and proper jumping and landing mechanics for power.

Rothman Orthopedic Institute is one of the world leaders in the field of orthopedics with locations in Pennsylvania, New York, New Jersey and Florida; Kupetz shadowed in the Limerick, Pennsylvania office. His preceptor, Courtney Wetzel, is a 2004 Lock Haven athletic training alumna who went on to obtain her PA-C in 2009.

Kupetz started with Rothman in the first week of March primarily working in the orthopedic urgent care but also had the opportunity to shadow orthotic technicians, athletic trainers working alongside physicians and physical therapists. In the urgent care, he saw a number of acute and chronic injuries that he was not previously exposed to during his clinical rotation. Some of the most unique injuries included a Tillaux fracture, Maisonneuve fracture, longitudinal patellar fracture, spondylolisthesis, pectoralis major tear, Achilles tendon rupture and L5/S1 disc herniation.

“A skill that I obtained in my time at Rothman is improving my ability to read radiographs and MRIs,” Kupetz said. “This is something I had not done much of at my previous clinical rotations but something I may be asked on occasion to do as a field athletic trainer, as they provide a great deal of information for clinical decision making.”

“Lock Haven’s athletic training program did an excellent job at preparing me for my full immersive clinical internship,” he added. “I have enjoyed getting the opportunity to build on this foundation while gaining some ‘real-world’ experience in both a traditional and non-traditional setting. This experience not only enhanced my knowledge in the domains of athletic training, but provided me the opportunity to refine my professional skillset, gain confidence in my abilities and develop a sense of professionalism that will serve me well as I enter the labor market.”