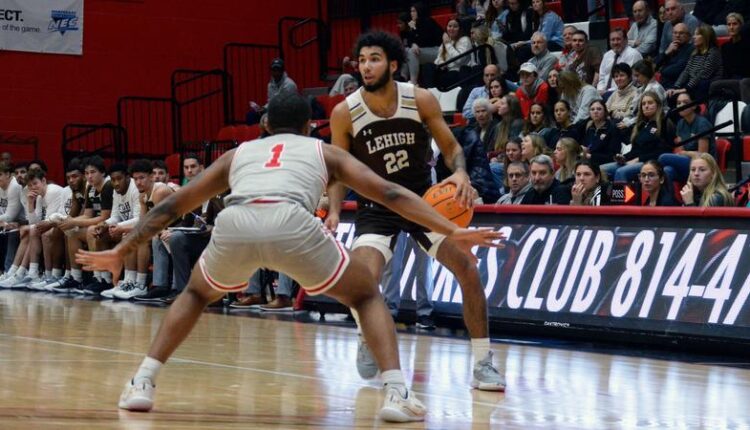 LORETTO, Pa. – The Lehigh men’s basketball team won its first road game of the year and earned its third straight win with an 82-76 victory over Saint Francis (Pa.) inside DeGol Arena on Monday night.

Lehigh improves his record at 3-2 on the year as the Red Flash fall to 1-4 overall. This is the Mountain Hawks’ first win over Saint Francis since December of 2018 and snaps a two-game skid to the Red Flash.

“Credit us for being able to be able to build a lead during an important stretch. We had a unit, including Reed Fenton and Tyler (Whitney-Sidney), who really played well,” stated head coach Dr. Brett Reed.

Both squads exchanged leads early in the contest, then Lehigh went on a run to extend its advantage to ten points, 22-12, with 12:15 remaining in the first half. Saint Francis then scored 12 unanswered points to regain the lead at 24-22 with 6:38 left to play. The Brown and White pushed the lead to as many as seven on two separate occasions and the Mountain Hawks headed into the locker room ahead of the Red Flash, 36-30.

Saint Francis opened the half with six-straight points to tie the game at 36-36, then once again at 41-41 with 15:20 remaining, before Lehigh strung together a couple of runs. The Mountain Hawks scored 17 of the next 21 points to take a 58-45 advantage with 11:26 to play, which included two 3-pointers from senior Reed Fenton coming off the bench. The Brown and White matched that 13-point lead two more times, the last time happening with 5:42 to play.

13:21 – 2nd| AND ONE!! Saint Francis calls a time with the Mountain Hawks leading 48-41. Higgins draws contact and still converts! #GoLehigh

The Red Flash clawed their way back to within three points within the final minute of the game, but the Mountain Hawks were able to hold on to their lead and come away with an 82-76 win.

Lehigh had three student-athletes finish in double-figures in points, led by sophomore Tyler Whitney-Sidney, who scored 18 points after shooting 6-for-10 from the field, 2-for-4 from long-distance and 4-for -6 from the free throw line. Whitney-Sidney added six rebounds and team-highs of four assists and three steals. Senior Evan Taylor finished the evening with 16 points, scoring ten points in the first half, to go with seven boards, two assists and a blocked shot. He was 6-for-9 from the floor and 4-for-5 at the foul line.

The other Mountain Hawk to score in double figures was senior Reed Fenton, who was playing near his hometown of Latrobe. He tossed in 12 points in front of many of his family and friends, including shooting 4-of-5 from the floor, 2-for-3 from long distance and 2-for-2 at the charity stripe while dishing out three assists and two rebounds.

“Reed gave us an excellent spark,” noted Coach Reed. “He and the guys were moving the basketball, attacking in transition, capitalizing on mistakes and overall went to the basket strong.”

Finishing the night just one point shy of double-figures was sophomore Keith Higgins Jr., contributing nine points, two assists and a rebound. Junior JT Tan led all Mountain Hawks with eight rebounds to go along with his four points and two assists. Junior Dominic Parolin and senior Jakob Alamudun combined for 15 points in the contest, with Alamudun bringing down six boards and two assists while Parolin added three rebounds, a block and an assist.

“Some point production from our bigs tonight, with Dom (Parolin) was strong and physical tonight and JT was taking bumps and established himself in the first half,” added Reed.

Reed concluded, “When you shoot 52 percent from the floor and have that many points in the paint, and a positive assist-to-turnover ratio, there are some positive offensive signs.”

Lehigh returns to action on Sunday, Nov. 27 when the Mountain Hawks return home to Stabler Arena to host Monmouth at 7 pm The game will be broadcast on ESPN+ and Fox Sports Radio at 94.7 FM and 1230 AM. Tickets to Sunday night’s game can be purchased at LehighTickets.com or by visiting the Stabler Arena box office prior to tip off.