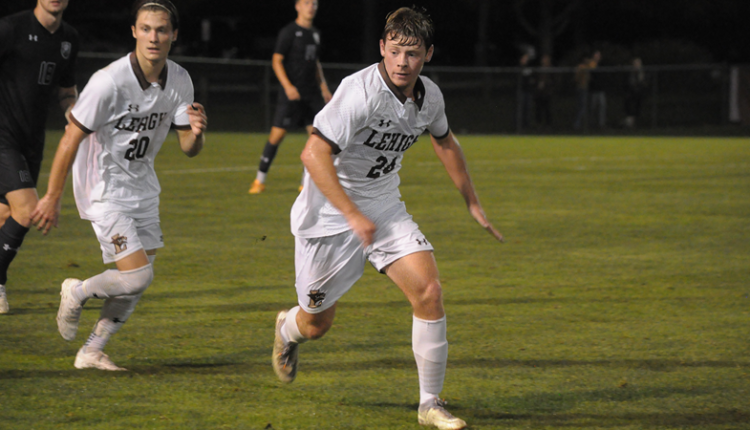 BETHLEHEM, Pa. – The Lehigh men’s soccer program continues its Patriot League slate of games on Saturday, visiting the nation’s capital to take on defending champion American at 2 pm from Reeves Field. The Mountain Hawks (0-6-1, 0-1-0 PL) continue to search for their first victory of the season after falling to UMBC on Tuesday and Loyola Maryland on Saturday at home for the league opener.

Lehigh was shut out for the third time this season at the hands of the retrievers, spurned by a first half hat trick by Taylor Calheira in the first 25 minutes of the contest. For the second straight game, the Mountain Hawks out-shot their opponent despite the defeat.

Offensively, the team was led by defender Euan Forrest with three shots (two on goal) and forwards Jack Sarkos and Valentine Perevalov with three shots each. Lehigh and UMBC both finished the contest with eight shots on goal.

Senior goalkeeper Noah Sutherland made five saves, but allowed three goals for the first time this season. His GAA rises to 1.72 with a save percentage of .625 in five starts for the Mountain Hawks. He has made a total of 24 saves on 74 shots faced so far in 2021.

Like Lehigh, American has had a rough start to the 2021 season and are experiencing somewhat of a championship hangover after beating previously undefeated Lafayette a season ago for the Spring 2021 Patriot League crown.

The Eagles (1-3-2, 0-1-0) are winless dating back to Aug. 29 vs. Old Dominion, falling at Holy Cross in the league opener on Saturday and coming off double-OT draws vs. Delaware and at Longwood.

In net, it’s been Lorenzo Gordon seeing action in all of American’s games this fall, registering a GAA of 1.71 with 25 saves, allowing 11 goals in six starts.

AU holds an advantage of 15-8-5 all-time over Lehigh and have won two of the last three matchups. The Eagles took down the Mountain Hawks, 2-0 in the season opener earlier this spring in Washington, DC Lehigh’s last victory over American was also on the road, a 2-1 victory back on Sept. 21, 2019 with goals scored by Michael Tahiru and Nathan Rosen.

Saturday’s matchup will be streamed live on ESPN+ (subscription required).