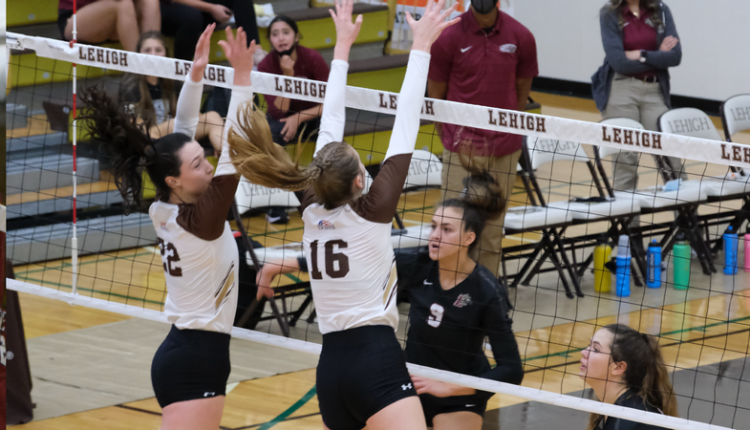 BETHLEHEM, Pa. – The Lehigh volleyball team closed out its final match of non-league play with a win against Penn on Tuesday night. The Mountain Hawks put on an exciting performance in Philadelphia, taking the Quakers to five sets before securing the 15-12 win in the fifth set.

“Getting this win tonight put us back on the right track and will hopefully propel us into the weekend with confidence,” said head coach Alexa Keckler. “I’m very proud of the fight our team showed during the fifth set. It was a hard fought battle.”

Lehigh opened up the match with a convincing 25-17 win in the first set. Going into the second set, the Quakers showed no signs of backing down as the two teams fought to take the lead. With the score at 24-23, sophomore Emily Stewart had the set-winning kill to give Lehigh the 2-0 lead.

Penn fought back in the third and fourth sets, winning 25-16 and 25-19, respectively. In the fifth set, both teams battled back and forth, trying to secure the win. With four ties in the fifth set alone, the Mountain Hawks won the final three points of the set to get the 15-12 win and secure their ninth win of the season.

“Megan really turned it on tonight,” Keckler said. “She did a great job finding ways to score and be the go to hitter we need.

“Emily’s blocking was extremely effective against Penn,” Keckler continued. “She had 16 block assists and those blocks created fire for us. I think her blocking came up huge in the sets we won. It definitely lit a fire in the fifth set.”

Lehigh will open up league play with a two-match weekend at Grace Hall. The Mountain Hawks will host Holy Cross on Friday at 7 pm and will close out the weekend with a 4 pm match against Army West Point on Saturday afternoon. Both matches will be streamed on ESPN+.

Formula May Be Right for Infants, but Experts Warn That Toddlers Don’t Need It