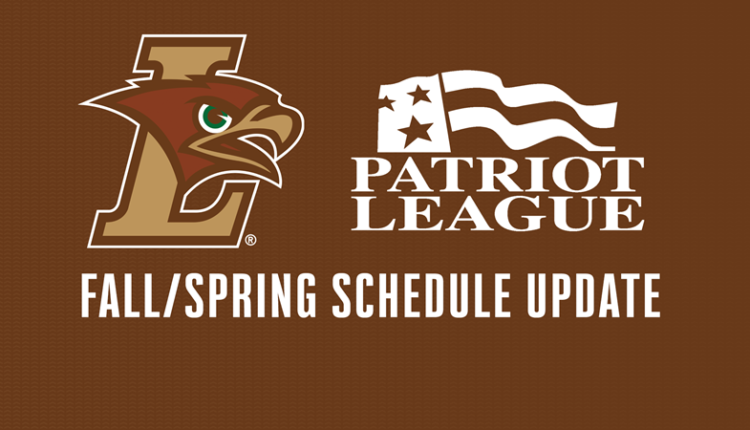 BETHLEHEM, PA. – The Patriot League and its member institutions have published schedules for 18 league sports that will compete against each other in spring 2021. League play will continue to depend on the league and its member institutions being able to conduct competitions in this way protecting the health and safety of athletes, coaches, staff and their communities.

Consistent with the prioritization of health and safety, the 2020-21 schedule formats show a significant reduction in travel and overnight stays. Teams are not allowed to fly to competitions. The league made adjustments to its traditional sport-specific formats, with teams playing a greater number of games against opponents of the league in closer geographic proximity.

Spectators are not allowed to participate in events that take place inside the Patriot League. The league and its member schools continue to evaluate audience participation in their outdoor competitions. All planning and decisions regarding viewers will continue to be fully informed about health and safety, taking into account local circumstances and regulations.

Further information on the planning formats for the fall and spring sports of the Patriot League for spring 2021 can be found HERE.

Lehigh has published schedules for all of the fall and spring sports programs that start this spring. The highlights of all of these schedules are listed below with links to sport-specific schedule pages.

ALL SCHEDULES ARE SUBJECT TO CHANGES.

SOCCER
Lehigh will play a regular season of four games starting with a home game against Holy Cross on March 13th. The Mountain Hawks will visit Colgate on March 20th and then join the South Division when they host Bucknell on March 27th. The 156th edition of The Rivalry takes place on April 3rd at Fisher Stadium in Easton. The division winners will meet in a Patriot League championship game on April 17th to secure a spot in the FCS playoffs.

FIELD HOCKEY
The Mountain Hawks won’t be leaving Lehigh Valley for their first four games – three at home and one in Lafayette. Lehigh begins his season hosting defending Patriot League champions American on March 7th and will also play for American on April 11th. After a trip to Lafayette on March 14th, the Mountain Hawks will greet Bucknell on March 21st and Holy Cross on April 4th. For the second straight season, Lehigh will end the regular season against Boston University, this time in Boston.

MEN’S FOOTBALL
The Patriot League defending champion will play in the South Division with five teams including American, Bucknell, Loyola and Navy. The Mountain Hawks open a regular season in AU on March 6 with six games on the road. Home games include Army West Point (March 13), Bucknell (March 20) and Navy (April 3). The regular season ends with a visit to Lafayette on April 9th.

WOMEN’S FOOTBALL
Lehigh opens its six-game campaign, hosting American, on March 6, ahead of consecutive street games at Army West Point (March 12) and Bucknell (March 20). The Mountain Hawks’ other home games are against Loyola (March 27) and Lafayette (April 10), with a Navy showdown in between (April 3).

VOLLEYBALL
The Mountain Hawks face the same opponent (on the road and at home) every weekend of the season, a total of five home and five street games. Lehigh kicks off the season on February 26th in Colgate and welcomes the Raiders to the Leeman Turner Arena in Grace Hall on Sunday, February 28th. Lehigh will face rival Lafayette on March 5th and 7th. The regular season ends with Lehigh against Holy Cross Mar. 26 and 28.

MEN’S AND WOMEN’S CROSSLAND
Both Lehigh Cross Country teams will have two events to prepare for the Patriot League Championships on March 5th in Lafayette. The Mountain Hawks begin their unique season with a double game against Bucknell in Lewisburg on February 13th. The Brown and White will then face Lafayette in Easton on February 20th.

OUTDOOR TRACK AND FIELD FOR MEN AND WOMEN
The Brown and White have six competitions scheduled to prepare for the Patriot League championships at Army West Point on the weekend of May 1st. Lehigh will host two of his first three events. The first scheduled home game will take place on March 21st against Monmouth. The next planned home event will take place on April 3rd. The John & Carol Covert Classic takes place on April 24th on the Goodman Campus. The much-anticipated Lehigh-Lafayette double meeting will take place in Easton on April 17th.

SWIMMING AND DIVING BY MEN AND WOMEN
The Mountain Hawks kick off the season with their hyped Brown and White get-together on February 27th. Next, the Mountain Hawks will meet virtually against riders on March 20th. In virtual meetings, both teams compete in their home pool and send in times. Lehigh will take to the streets for the first time on March 27th when they travel to Lewisburg and face Bucknell. On April 3rd, Lehigh will again participate in a virtual tri-meet with Lafayette, Holy Cross and Colgate. The Patriot League Championships is a four-day event that will be hosted by Bucknell starting April 21st.

BASEBALL
Lehigh’s Patriot League schedule of 30 games with 18 division games and 12 non-division games will precede six non-league games. The Mountain Hawks will double header in Coppin State on February 27th, and then with George Washington March 6-7, a four-game home-home series with double billing for J. David Walker Field on March 7th. March play Legacy Park. The Mountain Hawks play in the South Division with Bucknell and Navy and will play 13 games against League opponents this season, including Doubleheaders against Navy on March 20th, Lafayette on March 28th, Army West Point on April 17th and Bucknell on April 24th and Navy again on May 1st.

MEN’S GOLF
Navy will host the Patriot League Championship May 1-2, 2021 in Annapolis, Md. To prepare for the championship, Lehigh will be competing in tournaments hosted by Villanova and Lafayette. The Mountain Hawks will also play their annual double meet with Lafayette at Hamilton Farms Golf Club in New Jersey.

WOMEN GOLF
Lehigh will host the Patriot League Championship at Saucon Valley Country Club April 24-25. The spring season begins with the first of two events Monmouth is hosting on March 8th. Lehigh and Bucknell play doubles at home, with the Mountain Hawks hosting at the Steel Club in Hellertown on March 20, then visiting Lewisburg the next day.

MEN LACROSSE
The Mountain Hawks, ranked 16th in every major pre-season poll, will receive additional pre-season top 20 opponents on March 6 and April 3 at their home in Loyola and Army West Point. Lehigh starts his season with an out of league matchup against NJIT on February 27th and also has a competition on May 1st in Villanova as long as neither team has a make-up game to play. The Mountain Hawks encounter Bucknell and Lafayette twice each, one home and one en route.

LACROSSE FOR WOMEN
Lehigh begins his season with three direct non-league competitions against opponents from Philadelphia, the first two of which are at home. Everything starts on Saturday, February 20th against Drexel. The start of the Patriot League is March 13th at American. The Mountain Hawks’ home competitions in the Patriot League are against Army West Point (March 20), Bucknell (March 27), Navy (April 10) and American (April 24).

Rowing – women | MEN
The Lehigh women’s rowing team begins its season on March 20 in Philadelphia, while both the women and men face Drexel on the Schulykill River the following Saturday (March 27). Mountain Hawk’s rowers will have a number of catch-ups, including the women who take on Patriot League opponents Bucknell on April 3. They will work to do their best for their respective championships – the men at the Mid-Atlantic Rowing Championships on April 24th and the women at the Patriot League Championships on May 14th.

MEN’S TENNIS
Lehigh is expected to play seven games before the Patriot League Championships, which will be hosted by Lehigh April 22-25. To kick off the Brown and White, the Mountain Hawks will be welcomed to Lafayette at the Lewis Tennis Center on March 6th. Lehigh will then take to the streets on March 14th and fight Loyola, Md. The Mountain Hawks will then have their second home competition against Siena on March 20th. Lehigh will then face Colgate, Navy, Army West Point and Bucknell for four consecutive weekends before returning home to host the Patriot League Championships.

WOMEN TENNIS
The Mountain Hawks will play eight games ahead of the Patriot League championships, five of them at home. The season starts on March 6th against Fairfield. Villanova (March 21), Bucknell (April 4), Navy (April 10) and Army West Point (April 17) are the other home competitions. The first street match for Brown and White will take place on March 14th in Loyola (Md.). The rivalry against Lafayette will take place in Easton on April 24th this year. The four-day Navy Patriot League championship will take place on April 29th.