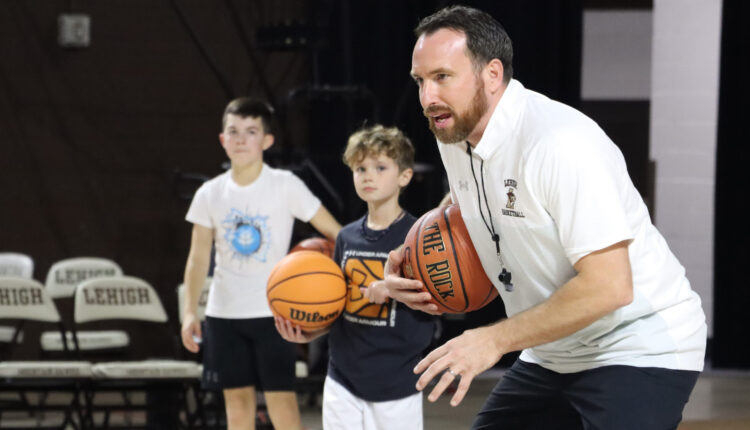 The 2021 Lehigh University youth basketball clinic was, for many of the young campers, the first time they had ever seen a 7-foot-tall person in real life, let alone a Division I basketball player dunking on a collegiate court surrounded by 6,000 seats .

On Nov. 8, the men’s basketball staff hosted another round of their boys and girls youth basketball clinic at Stabler Arena for Lehigh Valley children between the ages of 6 and 12.

Camp administrator and associate coach Harry Morra said children come from all over the Lehigh Valley’s 40 school districts to attend Lehigh’s youth clinics. He said the goal of having them there is to connect better with the community that could become fans of Lehigh’s sports teams.

Morra said his primary goal is to connect the Lehigh Valley with the university as both an educational institution and an athletic department through the youth sports clinics.

Individuals line up for drills at the Lehigh youth basketball clinic in Stabler Arena on Nov. 8. The clinic consisted of teaching participants how to dribble, shoot and pass. (Sophie Baraker/B&W Staff)

He said campers work with instructors and coaches, such as himself and men’s basketball coach Brett Reed, by doing drills that help them hone fundamental basketball skills like dribbling and shooting.

He said the children are not only instructed by faculty members, but a few Mountain Hawks make appearances at the clinics to be a part of demonstrations.

Fenton said the three of them loved watching the kids having fun together and learning how to play basketball.

“Not only the kids, but the families get to come together and spend time,” Conniff said. “These events are great for everyone, the university too, because we all get to engage with the community that surrounds us.”

Fenton said he remembers in the town he grew up in, there was a small Division III college that sometimes hosted similar youth clinics for local kids, which he attended any chance he got.

Anytime he got to go to the camps and play basketball on an official court, or even just watch the collegiate players play, Fenton said he felt like he was watching an NBA game.

“For the kids who love basketball and are fans of us, for us to be able to connect with them makes them even more invested in us and our season, which I think is important,” Fenton said.

With Lehigh being in South Bethlehem, Fenton said he felt there was no reason why the athletics department shouldn’t be doing a better job in connecting with the local community and creating a fan base out of them, which he said youth sports clinics can accomplish .