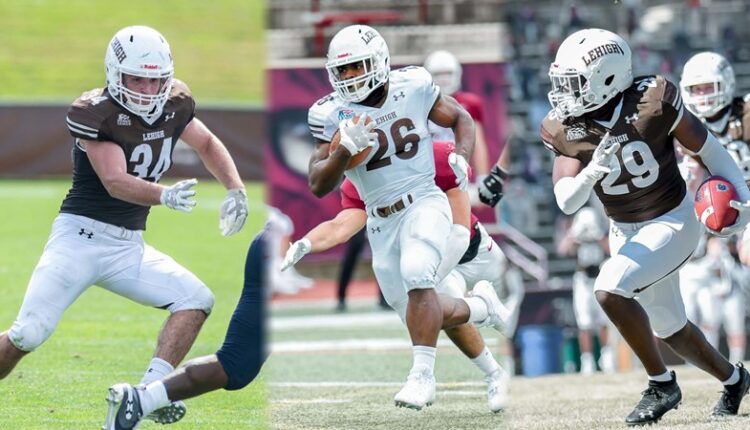 The Archibald Johnston Cup is awarded annually to the most outstanding player in the program and is also the Outstanding Athlete Award from the Lehigh Athletics Department. This year’s recipient is senior linebacker Pete Haffner. As team captain and second All-Patriot League selection, Haffner led the Mountain Hawks with 28 tackles in Lehigh’s three-game season. He added three tackles for the loss, a sack, and a fiddly recovery. Haffner was also an Academic All-Patriot League award winner.

Junior Runs Back RaShawn Allen won the team’s Scholar-Athlete Award for the second straight season. The award is given to the player who demonstrates his or her skills both on the field and academically. Allen is a two-time member of the Patriot League Academic Honor Roll and has a 3.73 GPA in Lehigh’s rigorous electrical engineering program. Allen rushed for 128 yards in three games, including a 49-yard touchdown scamper in the Lafayette game.

TyGee Leach received the James P. McConlogue Award, which is also the division’s coaching award, for a sophomore year. Leach was Lehigh’s only All-Patriot League laureate. He started all three games safely and finished second in the Mountain Hawks with 18 tackles. Leach brought Haffner into play with the best three tackles against the team and took his first career interception at the season opener against Holy Cross.

Senior Safety Divine Buckrham received the Barry Fetterman Award, given to the player who represents loyalty, selflessness and commitment to Lehigh football. Buckrham served as the team captain and mentor of a junior secondary group. Buckrham, who worked for the Mountain Hawks for four years, was recently awarded the Athletics Department’s John A. Cable Award, given to the outstanding senior male leader.

The John C. Whitehead (Big LU) Award is given to the player who plays the greatest leadership role with his or her performance. This year’s recipient is junior offensive lineman Justin Gurth. Gurth, a second All-Patriot League selection this spring, started every game for the Mountain Hawks in the middle this season and has now started all 25 Lehigh games on the offensive line since arriving on campus in Fall 2018.

Senior Chris Fournier won the Alexander G. Hahalis Award, which was given to the most outstanding lineman. Fournier started 25 games in a row with left wingers for the Mountain Hawks in the last three seasons and was also honored in the All-Patriot League of the second team. He was recently drafted by the Montreal Alouettes in the third round of the Canadian Football League draft.

The Nick Timko Awards, which also serve as the Engineer Effort Awards, are given to athletes who have contributed best to the team’s weekly preparation on the practice field. This year’s recipients are freshman offensive lineman Jackson Wiles and freshman defensive lineman Ben Murphy.