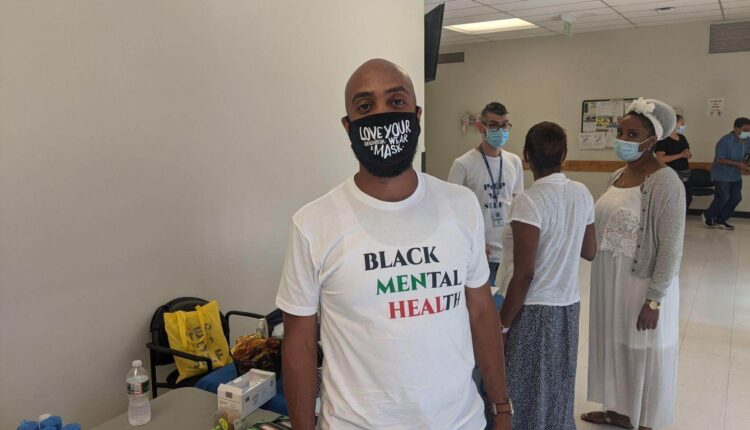 The pandemic created several hurdles to the city’s HIV prevention efforts during the past year, which resulted in fewer folks receiving free HIV testing at city health centers, says Eric Westbrook, director of the city’s Office of Black Male Engagement, on Wednesday inside the city’s Health Center 5 in North Philadelphia (Photo via The Philadelphia Tribune).

PHILADELPHIA — HIV testing in Philadelphia at non-health care sites dropped significantly during the past year as the novel coronavirus pandemic raged here.

City-funded testing at these sites, like community-based organizations, was down nearly 75% in December 2020 compared to the same time in 2019 before the pandemic, said Dr. Kathleen Brady, acting director of the city’s AIDS Activities Coordinating Office.

In 2019 before the pandemic, the city averaged slightly more than 1,300 HIV tests a month at non-health care sites. A month after the pandemic arrived in Philadelphia, a mere 72 people received HIV tests at those sites in April 2020.

Testing did not rebound by the year’s end. In December, 378 people were tested at those sites, which was the most recent figure. The drop in HIV testing last year is concerning, Brady said.

“We are definitely concerned about these numbers but this was hopefully a once-in-a-lifetime event,” Brady said, referring to the pandemic. “There was very little we could do at the time.”

Non-health care settings offer access to HIV testing for those at greater risk of exposure to HIV, who need more frequent testing, or may not be engaged in the health care system, Brady said.

Eleven generic versions of an HIV drug were rushed to market. And list prices went up. Why?

“Those are the folks that we really want to be sure are testing more frequently,” Brady said.

The pandemic forced monthslong closures of many of those organizations that offered free HIV testing starting in March 2020. Even when those non-health care settings fully reopened, which for some was as recent as last month, pandemic-related safety precautions limited the number of people they could test.

Brady said she hoped the loosening of pandemic restrictions would help those community-based organizations boost their HIV testing capacity.

African Americans accounted for 63.9% of people diagnosed with HIV through 2019 (before the pandemic), according to the city’s 2020 HIV in Philadelphia report, which includes the most recent data. The figure is well above African Americans’ share of the city’s population (44%).

In 2019, 18,798 people were living with HIV and the epidemic continued to be concentrated among men who have sex with men, according to the city’s 2020 Community Plan to End the HIV Epidemic in Philadelphia. New HIV diagnoses have steadily declined since the mid-2000s here.

Eric Westbrook, director of the city’s Office of Black Male Engagement, said the pandemic not only hindered in-person testing but tapped into Black and brown folks’ deep-seated distrust of the medical system. HIV also remains taboo in the Black community.

“In a lot of circles, that’s still a very difficult conversation to have,” he said.

The city does not track independently conducted HIV testing.

Before the pandemic, the city’s health department launched a federally initiative offering free at-home HIV testing kits — www.phillykeeponloving.com — which was ramped up during the past year.

Brady said the city has had a “huge increase in the amount of requests” for home HIV testing kits.

As the city rebounds from the pandemic, Westbrook said the city was aiming to increase in-person events, boost access and resources for those most at-risk, improve messaging around HIV prevention, and stamp out misinformation. Philadelphia offers free HIV testing and condoms, among a raft of other services.

While Westbrook said the pandemic created new barriers for HIV prevention, he said he hoped it would spark a new interest in personal health.

“2020 was a reckoning. It was a reset button. It was so much,” Westbrook said. “Folks … were here today and then gone the next, and for some I think that’s a wake-up call — just how much more we need to take care of ourselves.”

‘We all have to do better’: White House urges locals to boost eviction diversion programs