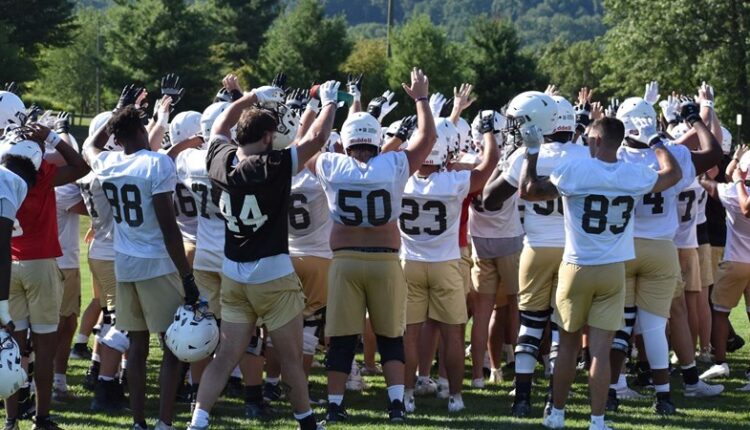 BETHLEHEM, Pa. – The countdown to football season slimmed to 30 days as the Lehigh football team opened preseason camp with a workout on a hot Wednesday afternoon on the John C. Whitehead Practice Fields. The Mountain Hawks didn’t mind the heat, showing plenty of energy and enthusiasm as they returned to the practice fields to prepare for a 2022 campaign that begins under the lights at Villanova on Sept. 2.

“I saw a lot of enthusiasm,” fourth year head coach Tom Gilmore said. “In a lot of ways, we had a great summer, so in a lot of ways this is a relief to finally be out there actually playing the game of football; together as a team, being able to do full team things. Even though there’s no contact or anything like that in our first practice, we did get to run through a lot of the basic things that we’re doing.It’s just a lot of fun getting out here and actually doing what you’ve been working all year towards.”

Lehigh’s 2022 squad carries a more veteran presence than each of head coach Tom Gilmore’s first three seasons. The Mountain Hawks also enter the new campaign with the positive momentum of the three-game winning streak that ended the 2021 campaign.

The Mountain Hawks return 17 starters while more than 40 returnees saw significant time during the season. The team also welcomes 26 newcomers to the roster. Gilmore has been impressed with the leadership of the senior class and the team’s captains have shown throughout the summer.

“We’ve had guys taking initiative and taking the bull by the horns and really leading the way,” Gilmore said. “It is becoming more of a player-led team. We talked about that before, but we actually saw that happening this summer, and we see at the beginning of camp here, some of those pieces, that leadership that you always want to see . We can do and say and believe what we want as coaches. It has to come from the players. Seeing that senior leadership and the leadership from the captains has been really refreshing.”

As is customary, Lehigh’s first two practices were held without pads, just helmets. The Mountain Hawks will then don shoulder pads for practices three through five. Following an active rest day Monday, Lehigh will don the full pads for the first time for practice no. 6 on Tuesday morning.

This year’s camp schedule features planned scrimmages on Aug. 13 and Aug. 20. The annual Alumni Steak Fry will follow practice on Sunday, Aug. 21, which will also mark the end of the “camp” portion of preseason, with Lehigh’s fall semester beginning Aug. 22. The Mountain Hawks will move into their in-semester practice schedule beginning Aug. 23 in preparation for the Sept. 2 season opener.

We caught up with @CoachTomGilmore after the first practice of the season today! pic.twitter.com/jcY3mumYVl

Lehigh’s season opener at Villanova is set for a 6 pm start on Sept 2. The Mountain Hawks’ home opener is set for Sept 17 against Richmond and will be the first of five home games at Goodman Stadium. Tickets for all Lehigh home games can be purchased online at LehighTickets.com or by calling 610-7LU-GAME during business hours.