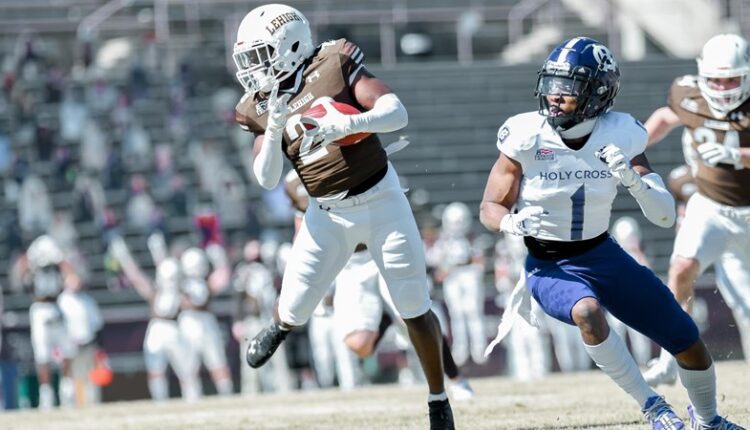 BETHLEHEM, PA. – The Lehigh soccer team played in their first game in 476 days, dropping their Spring 2021 campaign kick-off 20-3 against Holy Cross on Saturday at Goodman Stadium. The game had a sloppiness that would be expected by two teams that haven’t played since November 2019 as the Mountain Hawks and Crusaders combined made six turnovers and only 348 yards total offense.

Ultimately, three Lehigh sales resulted in 17 Holy Cross points, while the Mountain Hawks only got three points from their three takeaways.

Lehigh’s defense picked up where it left off last year, allowing only 209 yards while collecting three sacks and three food stalls.

“Everyone involved in the program was thrilled to play after such a long hiatus,” said Lehigh head coach Tom Gilmore. “It was really great to be out there for football on a nice day.

“Despite the circumstances we faced, I really felt we could have played a lot better in all three phases,” continued Gilmore. “Some of our mistakes were youth-type mistakes. Some of them were the result of some things we couldn’t do in practice. Hopefully this experience will give us some experience for the next week.”

The Mountain Hawk defense forced sales on Holy Cross’s first two holdings, but Lehigh was only able to collect three points from two holdings that had started in Crusader territory.

In the fourth game of scrimmage, the second Jack Bush loosened the ball from Holy Cross’ Byron Shipman, and senior Pete Haffner recovered at the Crusader 43-yard line.

Sophomore Transfer Cross Wilkinson started at the quarterback and completed his first Lehigh pass attempt for 28 yards to freshman Eric Johnson, but the ride stalled within the 10-yard line of Holy Cross. An abusive attempt to score the field goal resulted in a missed opportunity for the Mountain Hawks.

Two games after missing the field goal, sophomore TyGee Leach kicked a Connor Degenhardt pass for his first career interception and returned the ball to the six-yard line at Holy Cross. Lehigh couldn’t get into the end zone, but in the sophomore year Dylan Van Dusen shot a 20-yard field goal to give Lehigh an early 3-0 lead.

Lehigh’s first turnover of the day came deep into its own territory when Wilkinson fumbled for a sack with Jacob Dobbs, who was bouncing off the six Mountain Hawks. Three games later, Degenhardt’s pass was tilted towards the end zone, but was caught on the goal line by Dean Nagle. The four-yard pass put the Crusaders 7-3 ahead.

The next voyage of the Mountain Hawks ended with an interception by John Smith. Taking advantage of the short field, Holy Cross moved 33 yards in eight games and took a 14-3 lead with 12:37 before halftime.

The only goal the rest of the way came from Holy Cross kicker Derek Ng, who scored a 42-yard field goal in the second quarter that gave the Crusaders a 17-3 lead at halftime and a Goodman Stadium record of 51 yards in the third quarter to account for the final margin.

Lehigh’s defense kept the crusaders only 91 meters past and 118 meters on the ground. Leach led the defensive with nine tackles, two tackles against loss and a pass separation. Haffner added eight tackles, including three for the loss, and a sack.

“We did a lot of good things defensively,” said Gilmore. “We were really close to playing a really extraordinary game. I hope we can close those loops and make sure we don’t give up some of those games next week and in the future.”

The Mountain Hawks struggled to get their offensive going when Lehigh rushed only 24 yards and only won 113 through the air. Wilkinson was 8:13 for 56 yards and was sacked twice. Senior Addison Shoup came in and completed a 46-yard pass for sophomore Johnny Foley for Lehigh’s longest game of the day. Foley finished with two catches for 52 yards while Johnson added three catches for 44 yards.

Degenhardt finished 14-of-24 for 91 yards and two touchdowns for Holy Cross, adding 28 yards on 12 rushes. Jonathan Abrams rushed eight times for 62 yards for the crusaders.

The Mountain Hawks will head to Colgate next Saturday to face the Raiders. The game time is set for 3:30 p.m. at Andy Kerr Stadium in Hamilton, NY. The game will air on ESPN + with audio broadcast on Fox Sports Radio 1230/1320 AM and 94.7 FM Allentown.