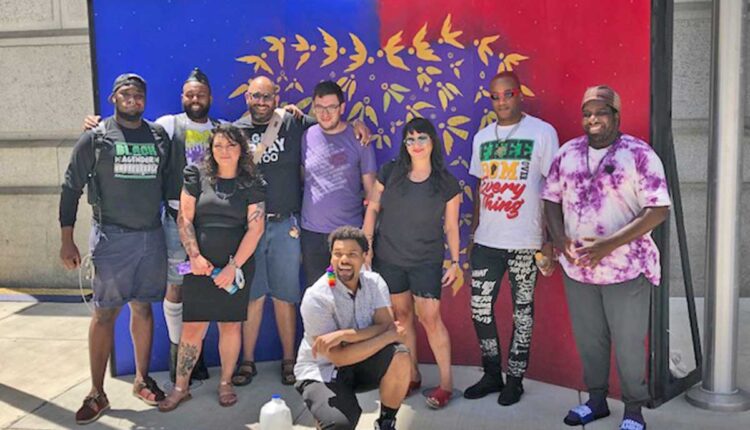 PHILADELPHIA — In the weeks following the abrupt dissolution of Philly Pride Presents, a group of Black and Brown LGBTQ+ community leaders have begun formulating plans for a new Philadelphia Pride event and, potentially, a brand new Pride organization.

The group held a press conference in late June, where activist Abdul-Aliy Muhammad, co-founder of the Black and Brown Workers Cooperative, stood beside fellow organizers Maso Kibble, Diamond Anthony, Jessica Kallup, Manny Frank-Lampon, Rich Frank-Lampon, André Henson aka Alzei Barbei Mizrahi, Elicia Gonzales and Jamaal Henderson to announce plans to revamp Philly Pride. They also listed “points of unity” regarding what a local Pride entity will and will not embrace.

Members of ACT UP Philadelphia, Philly Trans March and Disrupt Philly agreed on those points in an initial Zoom call discussing Pride.

The points dictate that police are not permitted at Pride, nor will the organization collaborate with the police; that Black and Brown LGBTQ folks be at the helm of Pride; that people with disabilities, including those who are deaf or hard-of-hearing, be able to access the event(s) and that Pride be welcoming to people of all backgrounds, including trans people, fat people, immigrants, Muslim people, folks living with HIV and Black women and femmes, among many other parameters.

After a second meeting on July 8, organizers discussed holding two upcoming Pride events: one in October, 2021 and the other in June, 2022, ACT UP Philly organizer José de Marco told the Philadelphia Gay News in an email. “Our planning has been inclusive of the entire community for the first time,” de Marco added. “All of us.”

The group is in the process of establishing committees to take care of logistics, fundraising and all other aspects of running Pride events in the city.

The participants in the meeting communicated that the events should be free of admission charges, that everyone in attendance will have access to food and beverages, that HIV education will be a central component of Pride and that Pride events will not overlap with the African American festival ODUNDE. “Pride organizers didn’t give a darn,” de Marco said. “It’s all in conversation.”

At the moment, the queer community members that comprise the new Pride group are in the process of determining committee leadership as well as how others can get involved, according to de Marco.

In late June, Philly Pride Presents (PPP), the organization that has been at the core of the Philly Pride festival and OutFest for decades, abruptly disbanded following deep-rooted community criticism for failing to be inclusive of QTBIPOC in its events and mission.

The organization closed down a few days before members of the new Pride formation had planned a protest action at City Hall to call out the cultural incompetence of PPP and demand that the organization be overhauled.

As of press time, a representative from PPP leadership did not respond to a request for comment on whether they would share their resource lists with the new Pride group.

The dissolution of Philadelphia Pride Presents marks a trend in similar LGBTQ organizations across the country. The board of directors that runs Boston Pride recently disbanded in the face of years of similar pressure from Black and Brown community members who did not see themselves represented in the organization.

And Heritage of Pride, which runs New York City Pride, has come under scrutiny for similar reasons, with another NYC group, Reclaim Pride, running a separate Pride march in recent years.