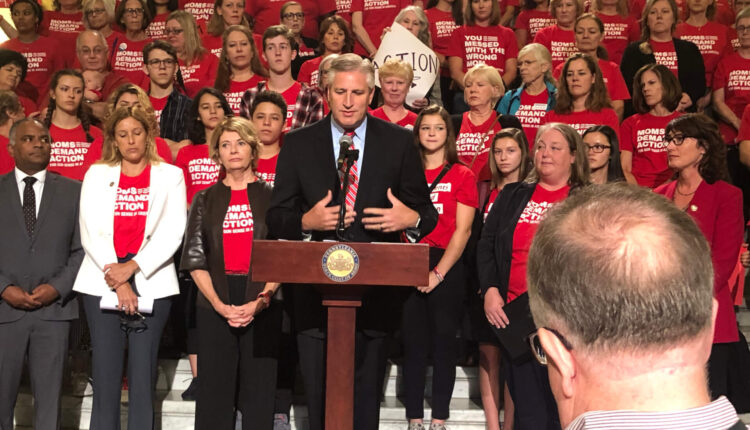 Nineteen states and Washington, D.C., have laws that allow law enforcement—and sometimes family members and school administrators—to petition civil courts to confiscate firearms from people who may be a danger to themselves or others. Judges decide whether to grant petitions, often called extreme risk protection orders, after a hearing. The orders usually last a year.

Most of the laws were passed in the past decade, and experts say that while the measures are saving lives, they sometimes aren’t used to their full potential: Police officers might not invoke them for lack of training or awareness, for example, or the legal system might not have the infrastructure to guide officers and judicial officials through the process.

States also are debating who should have the right to file a petition to make these laws more effective. In most states, that’s left to law enforcement officials, but in others that includes family members, school administrators and health care providers.

Red flag laws remain one of the few gun safety efforts that Democrats and at least some Republicans can get behind, though gun rights groups such as the National Rifle Association vehemently oppose the policy.

U.S. Senate leaders last week announced bipartisan legislation that will, in part, create incentives for states that adopt red flag laws. The congressional measures will provide crisis intervention grants to states that can be used to implement these laws. The grants also will be available to states for mental health and drug courts.

Red flag laws have been lauded by gun safety advocates and law enforcement officials as a lifesaving tool that can prevent mass shootings and suicides. Gun rights activists argue these laws lack proper due process, with judges able to temporarily remove firearms under two-week emergency orders before gun owners can offer a defense.

Numerous studies show the tool is especially effective in preventing suicides. And one recent study by the University of California, Davis, shows the state’s law has prevented nearly 60 mass shootings.

The measure, which Democratic Gov. Kathy Hochul signed earlier this month, allows health care providers to petition courts to temporarily remove firearms from at-risk people. The law previously allowed family members, law enforcement and schools to seek extreme risk protection orders. A recent executive order from Hochul also requires that law enforcement file orders if there is probable cause that someone may harm themselves or others.

“When enforced, there’s no doubt it’s a highly effective tool,” she said. “This is a relatively new law in New York, and with that we need to make sure that people know this tool is available to them.”

New York’s red flag law came under scrutiny recently after an 18-year-old man in May shot and killed 10 people at a Buffalo supermarket after months of making threats and showing concerning behavior. Law enforcement officials failed to use the tools available to them, said Democratic Assemblymember Jo Anne Simon, who sponsored the original red flag law. She blames a lack of training and understanding.

The law has been used fairly regularly in some counties and not at all in others, Simon said. She had concerns about implementation even before the Buffalo shooting and was in talks with the governor’s office about a public information campaign. She hopes the updated provisions in the new law will be more effective to clear up confusion over the standards for petitions.

“I can understand where law enforcement may not get it,” she said. “It’s outside their normal purview. But they’re not asked to bring charges. They’re just asked to go to court to file a petition for an extreme risk protection order, and then the court will hear that evidence and decide whether a petition is issued.”

Since the Buffalo mass shooting, state police officials have filed a surge of extreme risk protection orders in compliance with Hochul’s executive order, the Times Union reported last week. However, judges have rejected many of those petitions because of confusion over procedural and legal matters.

“It does not appear [officers’] training includes the legal nuances necessary for them to proceed in such a manner in these legal proceedings (rules of evidence, conducting direct and cross examinations, etc.),” wrote state Supreme Court Justice Craig Stephen Brown to the state attorney general’s office and the state police, according to the Times Union.

One state police official told the newspaper that officers were struggling with their workload and were confused by the process to file extreme risk protection orders.

“It’s going to be a process,” said Agrawal, who also chairs the Gun Violence Solutions committee for the American Medical Women’s Association. “It’s really important, as these laws get rolled out, that there’s a component of evaluation plugged into it so we can see what works and doesn’t work and tweak them along the way.”

Dr. Jack Resneck Jr., president of the American Medical Association, told Stateline that while the organization does not have a specific policy on broadening petitioning rights to health care providers, red flag laws “are just an extremely important part of one piece of addressing this pandemic” of gun violence.

These laws have been proven to save lives, said Shannon Frattaroli, a professor at Johns Hopkins University’s Bloomberg School of Public Health, who studies gun violence prevention policy. Her research has demonstrated that people who commit atrocities often signal ahead of time they’re going to do it. Law enforcement shouldn’t just respond to mass shooting events—they should try to stop them before they occur, she said.

But in order for red flag laws to work effectively, states need to train law enforcement how to use the laws and then safely remove guns after the court order, she argued.

“This isn’t just automatic,” she said. “We need to have the infrastructure in place in order for this to work.”

In the three years after it was enacted in 2016, California’s red flag law was used 58 times to remove guns from people who threatened a mass shooting—six of those cases involving minors who were targeting schools, according to a June study by UC Davis. Researchers scoured court records from 2016 to 2018 to show why judges granted these petitions, which in California are known as gun violence restraining orders.

Although California allows family and household members, coworkers and school officials to file petitions, nearly 97% of them have been filed by law enforcement officers, according to the study. Still, it’s important to give options on who can file these petitions, said Veronica Pear, an assistant professor of emergency medicine at UC Davis, who was the lead author in the study.

“Not everyone is going to feel comfortable bringing law enforcement into a situation,” she said. “It could escalate things. There’s a lot of reasons to petition themselves.”

To get more Californians to use the law, Democratic Gov. Gavin Newsom announced this month he was launching an $11 million public information campaign. The 18-month campaign includes grants to community-based domestic violence groups, multilingual outreach to communities of color and education and training for district attorneys and other law enforcement officials.

“We know there’s more to be done at the hyperlocal level and in vulnerable communities,” said Diana Crofts-Pelayo, assistant deputy director of crisis communication and public affairs at the governor’s Office of Emergency Services, which is administering the campaign. “We need trusted messengers to let folks know that this resource is out there and not to be afraid about it.”

But Frattaroli, the Johns Hopkins professor, said lawmakers and public safety officials should focus on training law enforcement officers and other first responders rather than public education campaigns.

“The general public has too much information coming at them at any given time,” she said. “The nuances of extreme risk laws are not going to matter to people until they need them.”

In Florida, only law enforcement officers may petition courts for gun removal, but state Rep. Carlos Guillermo Smith wants to give family members the same right.

“Oftentimes, when law enforcement gets involved, it’s too late,” said Guillermo Smith, a Democrat. “They don’t see what family members or close relatives see every single day. They could have protected themselves and loved ones and prevented tragedies.”

Florida judges have issued close to 9,000 extreme risk protection orders since the state implemented its red flag law in the months following the 2018 mass shooting at Marjory Stoneman Douglas High School. The law has saved lives, Guillermo Smith said, but it could be more effective.

The original red flag law had bipartisan support and was signed by then-Gov. Rick Scott, a Republican who is now in the U.S. Senate. Smith hopes GOP colleagues will support his proposed expansion, but that remains unclear, he said. Gun rights advocates have opposed these measures strongly and argue the implementation challenges show the policy does not work.

Many of these hurdles speak to the ineffectiveness and complexity of red flag laws, said Daniel Stuebs, executive director of the American Police Officers Alliance, a national political group that advocates against what the group calls “anti-police” politicians. He fears the law could be abused for personal disagreements. He also worries that government officials don’t have the tools to explain and enforce these laws.

“While we understand the potential appeal of this sort of legislation,” he said in a written statement, “there are many issues with ethics, constitutional rights, and effectiveness when you actually consider implementation.”

Listen: He Was Denied Care Because He Owed His Doctor Less Than $100