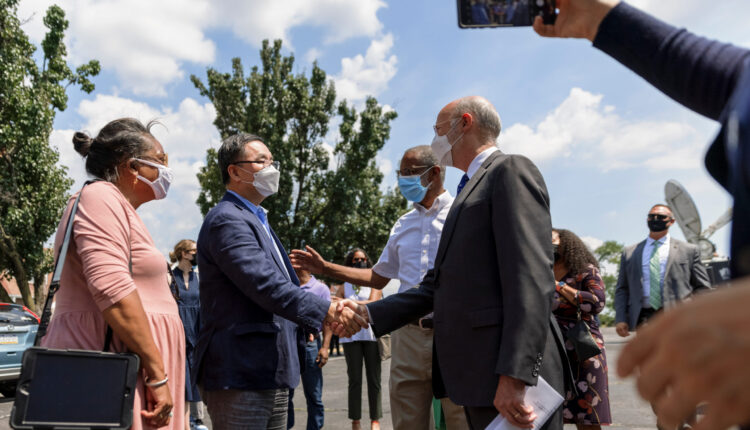 Gov. Tom Wolf has ordered thousands of nurses, prison guards, and other staffers in state-run facilities to either get vaccinated or be tested weekly for COVID-19.

The policy comes amid surging COVID cases nationwide from the delta variant of COVID-19, which health experts say is more contagious than the virus’ original strain.

Wolf also made a separate announcement that all state employees who have been vaccinated will get one paid day off of work.

Wolf said the day off was modeled after a policy for employees at his family cabinetry company who donated to the United Way.

The number of new people getting vaccinated is declining, according to state data. About three in five Pennsylvanians are fully vaccinated as of Tuesday.

The variant may pose a higher risk to the unvaccinated than earlier strains, according to the federal Centers of Disease Control and Prevention, increasing the push from policy makers to increase vaccination rates.

All told, 24,000 state workers in state hospitals, prisons, veterans homes, and centers for the disabled will be impacted by the order.

Starting Sept. 7, if workers in these facilities do not get vaccinated, they must take weekly tests for the virus. The tests will be at no cost to the employee, and will mostly take place on site, the administration said.

The administration also announced it will only hire vaccinated individuals for open jobs in these facilities starting on the same date.

The order could have a notable impact on state prisons, where more than three out of four of the state’s nearly 16,000 prison staffers have not been vaccinated, according to state data.

A number of states have adopted similar vaccine policies requiring testing without a vaccination in recent days, including Oregon and New Jersey.

Others, like California and Washington, mandated that healthcare workers be vaccinated, with few exceptions. Those who do not vaccinate could face penalties up to and including firing.

Last month, more than 50 medical groups, including the American Medical Association, and a number of nursing associations, signed a letter backing mandatory vaccination for health care workers “for their own health, and to protect their colleagues, families, residents of long-term care facilities and patients.”

“While we recognize some workers cannot be vaccinated because of identified medical reasons and should be exempted from a mandate, they constitute a small minority of all workers,” the letter said.

More incentives for vaccination could be on the way, Wolf added. As part of the budget, Wolf has $370 million of federal stimulus money to be spent at his discretion.

He suggested Tuesday that he and legislative Democrats were looking into using those dollars to give vaccinated Pennsylvanians $100 each, as President Joe Biden had suggested last month.