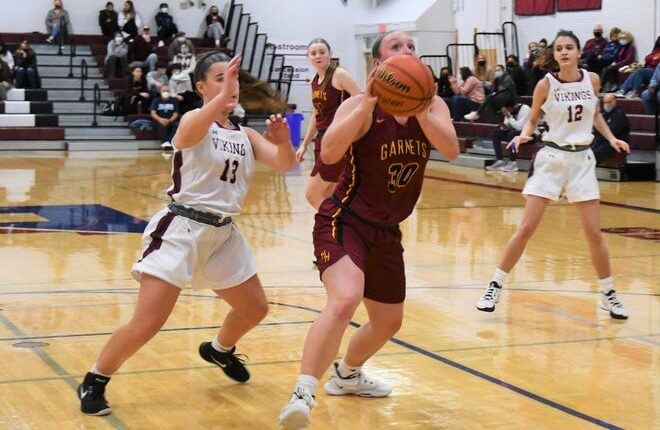 Even after he committed to playing softball at Lehigh University, there was never a chance that the Haddon Heights basketball junior would give up.

Softball wasn’t her first sport, but something just clicked – in a big way.

“I don’t know if I would like softball that much,” Clark said. “I think it was just something I was attracted to. I started playing it and fell in love with it. I thought basketball was going to be my thing early on, but then I started around eighth grade. I started softball and that became my thing.”

Basketball is still “a” thing for Clark, just not “the” thing.

On Tuesday morning, Clark led the Garnets by 18 points in a 41-31 win over hosts Eastern at the Vikings Holiday Showcase. After a challenging start, Clark scored nine points in the fourth quarter to freeze the game.

“Maddy was a little frustrated in the first half,” said Garnets coach Lauren Kendra. “She didn’t really finish her layups. We know she’ll get through it. We never have to worry about them. She will always be diving for balls. She will always be like fighting her way through to get a win.”

Not bad for a Division 1 pitcher. No surprise either.

“Basketball runs in her family,” Kendra said. “Her mother, Cheryl Kulesa, was a huge player. of Gloucester Catholic. I went to Gloucester Catholic, so I’ve known Maddy since she was a little kid. She’s always been a great kid. She was a classroom teacher. She’s mature, she’s positive. She’s just the hardest working kid you’ll ever meet.”

Kulesa scored over 1,900 points for the Rams. She was also an outstanding soccer player. Numerous sports are also in Clark’s blood.

“It’s always a big deal to worry about getting hurt or this and that,” Clark said. “I just love this sport too much. I think it’s also really good for me to be able to use other muscles and get other parts of my body to work and stay in shape.”

Despite this, it is never too far from the rolling circle. She’s never more than a day or two away from her next softball practice. Balancing two sports gets Lehigh’s seal of approval.

“My head coach at Lehigh is married to the basketball head coach there, so they definitely have a special place in her heart for basketball,” Clark said. “I think they’re more than okay playing both sports.”

That’s not Clark’s entire focus, however. Lehigh’s athletic teams are called engineers for a reason, not because the railroad goes past campus. The reputation of Lehigh’s STEM school was an additional selling point.

“I’ll probably do some math as an undergraduate and then I’ll take their four-plus-one master’s program in education,” Clark said. “I always wanted to be a teacher. Math was something I’ve always been good at. That’s one of my strengths. I would like to take up that. I am interested in the teacher part. My parents both work at the high school I go to, so it’s kind of cool. I’m excited because I want to follow in their footsteps.”

Support local journalism with a subscription to the Courier Post, Burlington County Times or the Daily Journal.