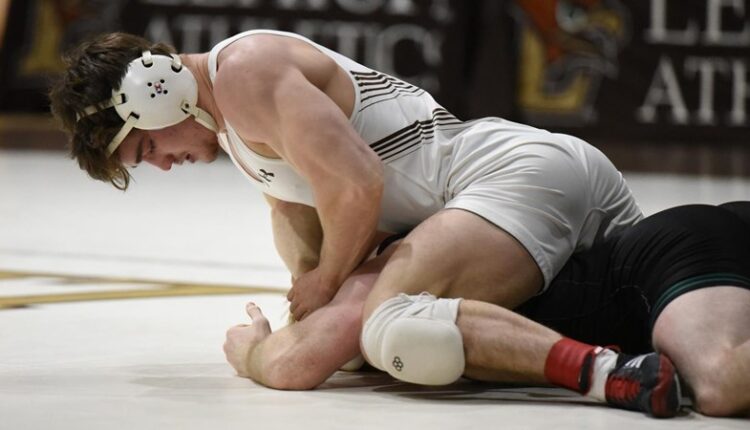 No. 17 Lehigh Opens Home Stand With 24-14 Win Over Binghamton

BETHLEHEM, Pa. – No. 17 Lehigh opened up its four match home stand with a 24-14 victory over Binghamton Friday night inside Leeman-Turner Arena at Grace Hall. The Mountain Hawks won six bouts, including bonus wins from juniors Jaret Lane (125) and Josh Humphreys (157) and sophomore AJ Burkhart (184) to win their EIWA opener and improve to 5-4 on the dual season.

The Mountain Hawks raced to an early 9-0 lead behind wins at the first two weight classes. Lane picked up his fourth fall of the season, using a reverse headlock to pin Nick Curley in just 48 seconds in the first bout of the night.

At 133, Malyke Hines made his return to the lineup victorious, as he mixed first and third period takedowns with strong work on top in an 8-4 decision over Anthony Sobotker. Hines rode out the second period, picking up a stall point in the process, and finished with more than four minutes of riding time advantage.

“Jaret did a great job getting us started because we knew bonus points would be big tonight,” Lehigh head coach Pat Santoro said. “Malyke hadn’t wrestled in nearly a month so it was good to get him back on the mats and into competition mode again.”

Binghamton (3-9) clawed back within 9-6 with wins at the next two weights. First year Drew Munch got the nod at 141 against Ryan Anderson. Munch led 3-2 after one period but Anderson came back with a second period takedown and went on to win 6-4 to put the Bearcats on the board. A 5-0 decision for Nick Lombard over junior Jimmy Hoffman at 149 cut Lehigh’s lead to three.

Humphreys continued his recent hot streak with a first period technical fall over Tyler Martin at 157, his fourth straight bonus point victory and seventh straight win overall. He scored an early takedown, then picked up a trio of four point near falls before ending the 16-0 tech fall with a two point near fall at the 2:39 mark.

“We needed that from Josh,” Santoro said. “We knew we needed to win three of the first five and that bonus would be big, and we got them. (Martin) did a really nice job. He was really flexible. Josh did everything right. (Martin) just fought to not give up that extra team point.”

Sophomore Brian Meyer extended Lehigh’s lead to 17-6 in the first bout after intermission, scoring takedowns in the first and third periods to beat Brevin Cassella 4-3.

The Bearcats pulled three points back after Jacob Nolan’s 6-4 sudden victory win over Jake Logan at 174, but Burkhart put Lehigh up by 12 with two bouts remaining following a 12-4 major decision over Sam DePrez at 184. Burkhart gave up the first takedown but then scored the next five, the last coming late to secure the bonus point.

Binghamton’s top-ranked wrestler, Lou DePrez picked up a technical fall over junior Eli Grape at 197 before senior Jordan Wood edged Joe Doyle 3-2 in the final bout of the night. Doyle scored the only takedown of the bout but Wood escaped twice and rode out the third period to win with a 1:38 riding time advantage.

“There were some matches where we just hung out,” Santoro said. “When we focus on scoring throughout the whole match, we’re a really good team. When we start hanging out is where we get into a little bit of trouble some times. We need to be a little more aggressive. Part of it is we’ve had just one weekend where we competed – down in Florida – since early December. Hopefully each time out we can get sharper and sharper.

The Mountain Hawks are back home on Saturday to face No. 8 Cornell on Pinning Cancer Day, presented by Red Robin in partnership with the Leukemia and Lymphoma Society. The match is set for a 2 pm start. A limited number of tickets are still available and can be purchased at LehighTickets.com or at the Grace Hall ticket window prior to the match.