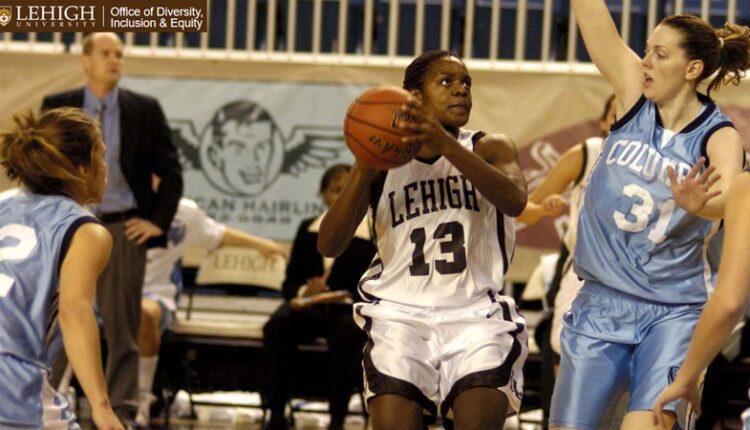 Adrienne Blount’s medical device sales position requires a lot of focus, much like her days at Lehigh.

“You have moments when you have to concentrate fully, then there are moments when it is a little easier when you talk and have a certain relationship,” said the former All-Patriot League basketball star. “I have a computer that is displaying a 3-D model of the patient’s heart (and the doctor can see his tools in real time as he works in the heart).”

After graduating from Lehigh in 2007, Blount earned her Masters Degree from Duke in 2009. Since then, Blount has worked for Abbott (formerly St. Jude Medical) in the distribution of medical devices – particularly cardiac medical products.

Blount and her colleagues are experts in certain medical devices, so they are procedure resources for physicians.

“I cover ablation procedures,” she said. “If your heart has an arrhythmia, we have a product that can map it out. I’m in proceedings with the doctors, helping them pinpoint the cause of the problem and get rid of it.”

Blount, the valedictorian of her high school, wanted to get involved in medicine as long as possible.

“As you prepare for college, everyone keeps wondering what your major is going to be,” she said. “You look at what you can do and what you like. I’ve always been good at math and science, and my father was an engineer, so I thought engineering was perfect.”

Speaking of perfect: Lehigh was a perfect fit for Blount not only as an athlete, but also as a student.

“Lehigh offered a bioengineering program that appeared to be the best of both worlds,” she said. “I thought I wanted to be a doctor, but I was good at engineering. As a senior who left Lehigh, you have to make all these funny decisions.”

She concluded that she did not want to become a doctor but wanted to stay in the healthcare sector.

“So I decided to go to school,” said Blount.

Blount went to Duke where her father was present.

“That brought me to North Carolina and I’ve been here (in Durham) ever since,” she said. “I entered Duke’s master’s program in biomedical engineering.

“During my sophomore year, St. Jude Medical was recruiting on campus and talking about this job where you face clients.”

The concept of customer focus caught Blount’s attention. Although she is rather calm, she is a very decent person, which makes St. Jude (now Abbott) perfect. Blount had secured the position before graduating from Duke.

“I’m an engineer, but sitting in a booth all day doesn’t really suit me,” she said. “I can stand in front of customers and doctors.”

“A doctor will say he / she has atrial fibrillation and schedule someone on our staff,” said Blount. “This is probably our most common practice. Usually, the first case means 8:00 am, procedural times vary. AFibs are usually long … about three hours.

“My schedule depends on the hospital plan, which depends on my doctor plan.”

The time may have passed since Blount joined the workforce more than a decade ago, but her passion for what she does is as strong as ever.

“I love it because I help people,” she said. “It’s not necessarily life or death. It’s better quality of life. If you have AFib, you’re at risk of stroke, and therefore risk of death. But for the most part, it’s uncomfortable. Palpitations and someone’s heartbeat is uncomfortable, and it can be.” affect the patient’s blood pressure.

“But it’s an operation, so there’s always a risk,” continued Blount. “There are high stress moments when a patient can go into VFib (ventricular fibrillation) where we need to get the patient back into rhythm or ablate (burn tissue) near vital electrical landmarks in the heart, full focus. The other parts are easier and we can talk and make jokes. “ Blount said helping others has always been the driving force behind their interest in health care.

“At the same time, I love math and science, so part of my brain is stimulated every day,” she said.

While Blount’s career is a passion, that doesn’t mean everything was always easy. Same goes for basketball.

“When I first started working, I also made pacemakers and defibrillator implants, so you’ll be on call over the weekend,” said Blount. “You have to switch vacations with your team. If someone is rushed to the hospital because their device has failed, they can call someone at the company to have their device checked. You need someone who is available 24/7. “

Blount is no longer on call, but when she was it reminded her of her days as a Lehigh athlete – like limited breaks on vacation or workouts / exercises anytime from early morning through evening.

“I didn’t love getting up early, but I’ve gotten used to it,” said Blount. “Basketball is a winter sport, but you pretty much start when you step on campus and it goes until the end of the year. You get used to doing what needs to be done and use whatever time you have . You just roll with the strokes. When you have a moment with family or friends, immerse yourself in and fully appreciate it. “

Every sacrifice Blount has made for her job or basketball has been worth it.

One of the biggest motivators was people.

“I chose Lehigh because of the family atmosphere,” she said. “My high school team was like that too. I just sensed that at Lehigh. I still have good friends on the team and we still talk to this day.”

Same goes for Abbott. Over the years, Blount’s technical knowledge of her job has been strong, but perhaps most importantly, the intangibles of a team environment.

“You have to read the room,” said Blount. “Some doctors want you to speak, some don’t. Most of the time I have an account and they’re a great group of people. I get on with all doctors and nurses.

“The environment reminds me of my Lehigh team,” she continued. “Obviously you’re there for basketball. You run, you sprint, you do all these serious things, but then there are easier moments that everyone practice for a long time.”

Knowing when not to speak is just as important as knowing when to speak.

“Some days the mood is lighter. Some days you can find that something is wrong, so you can wonder how they are doing,” said Blount. “There are days when the case is really difficult and people are frustrated, you might not say that much.”

Blount compares the uniqueness of each day with her time in Lehigh.

“Every exercise is not the same; not every exercise has the same energy,” she said. “Some days you have to be more careful with this person, or maybe try to inflate the other person. The more you are with people, the more you can read their moods and navigate through any challenges.”

Blount has overcome a number of challenges over the years that helped make her the person she is today. On the court, she tore up her ACL as a high school graduate, which made her feel like she was catching up as she transitioned to college basketball.

“Being an engineering student was hard. Being an athlete was hard,” she said. “You put it together and it was crazy. I wouldn’t give it up for the world, but it was a challenge.”

When I thought about this balance, a story came to mind.

“We had morning workouts one spring and we were doing maximum workouts,” she said. “Then warm up and repeat one rep with higher and higher weights until you hit your max. And I had an exam that day.”

Downtime was built in between squats and Blount took advantage of it.

“So I learned,” she said. “If it was my time, I would go upstairs, hang up the bar, crouch and get up again. In those five minutes in between, I studied. “This is probably the epitome of a student-athlete moment.”

“Adrienne is a true example of the qualities that characterize our Lehigh Scholar-Athletes, having excelled as an all-league performer on the basketball court, a major in bioengineering in the classroom and a key executive in our program” said Lehigh head coach Sue Troyan. “She was a student athlete who was great at multitasking and building relationships with her teammates. It’s no surprise she excelled as a professional having left Lehigh with all the tools necessary to succeed.”

Blount has been successful all of her life, with each piece building on the previous one. This would not have been possible without a strong family foundation.

“My father was always a great academic,” said Blount. “He went to Duke and Stanford and was a computer engineer. I knew it was in me. My older brother played sports. I played all the sports he played and fell in love with basketball.”

“And of course my mother is the most supportive person ever. Anything I wanted to do, she would say let’s do it,” Adrienne continued.

Blount’s family may have helped her prepare for success, but Adrienne’s focus and hard work made it possible.

“I love what I do and love what it offers me every day.”

As part of Black Excellence Month in collaboration with Lehigh’s DEI Office, we are proud to present former sports students and color coaches. This week we’re sharing the story of Adrienne Blount ’07 from @LehighWBB!

Check back on Wednesday for the full feature story. pic.twitter.com/qp3nWorVcN