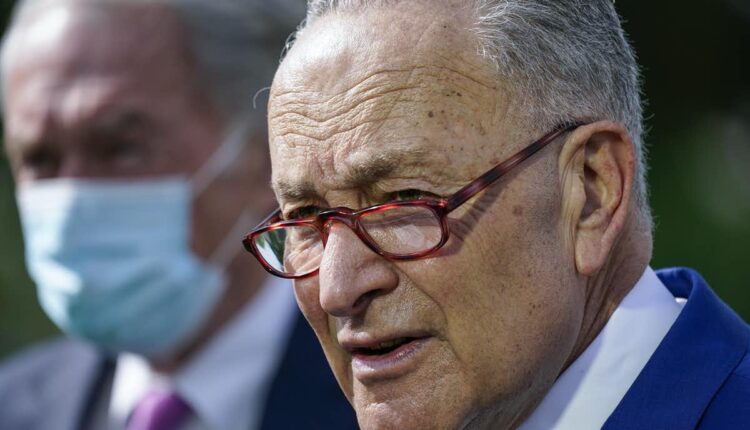 Schumer: Congress should legalize weed on the federal level

Schumer is seen at a news conference at the U.S. Capitol in Washington on April 28, 2021 (AP Photo/J. Scott Applewhite).

WASHINGTON — The top Democrat in the U.S. Senate says decriminalizing marijuana at the federal level is a change that’s “long overdue,” and that he’s prioritizing that effort amid a growing number of states legalizing cannabis.

To that end, Senate Majority Leader Chuck Schumer on Wednesday unveiled a draft proposal for removing cannabis from the federal Controlled Substances Act, freeing states that have been legalizing cannabis for medical and recreational use from repercussions over the clashing laws.

The discussion draft also calls for re-sentencing and expungement of non-violent marijuana convictions. Revenues from a new federal tax on cannabis would be used in part to assist those most affected by the current federal marijuana laws by paying for job training and reentry programs.

“As more and more states legalize marijuana, it’s time for our federal cannabis law to catch up,” Schumer, of New York, said at a news conference Wednesday, describing the proposal as intended to “right the wrongs of the failed war on drugs.”

Eighteen states and the District of Columbia have legalized small amounts of cannabis for recreational use among adults, and 36 states allow for medical use of marijuana, according to the National Conference on State Legislatures.

During Wednesday’s news conference, Schumer said marijuana opponents had predicted “doom and gloom” in states legalizing the drug, but said their forecasts of increased crime and other negative ramifications did not come to fruition.

Sen. Cory Booker, D-N.J., a long-time proponent of legalizing marijuana, decried the inequity of members of Congress and presidents having admitted that they have used cannabis, “but we have children in this country, people all over this nation, who are veterans, Black and brown people, low-income people now bearing the stain of having a criminal conviction.”

The measure released by the senators is a draft, which Schumer said will be revised with feedback from the public.

In a Senate chamber that’s evenly divided and requires 60 votes to advance legislation, supporters still have quite a bit of work to do.

Schumer acknowledged they do not have enough votes to pass such a proposal, or support from all Democrats.

Among Republicans, Sen. Chuck Grassley of Iowa, the ranking GOP lawmaker on the Senate Judiciary panel, released a statement blasting Schumer’s measure as putting “the cart before the horse.”

“It’s important that we have robust research and fully understand the good and the bad of marijuana use, especially in young people and over the long term,” Grassley said, highlighting his own proposal on marijuana research.

Sen. Ron Wyden, D-Ore., who chairs the Finance Committee and joined Schumer at the news conference, emphasized that it will be up to states to determine whether they want to legalize marijuana use.

“I don’t understand how Republicans who say they’re for states rights won’t support what my colleagues are talking about, because what this bill does is we decriminalize at the federal level, but we don’t require states to legalize,” Wyden said.

Beyond Capitol Hill, President Joe Biden, a Democrat, has been slow to embrace marijuana reform. He has previously supported decriminalization, but has not joined calls for legalization.