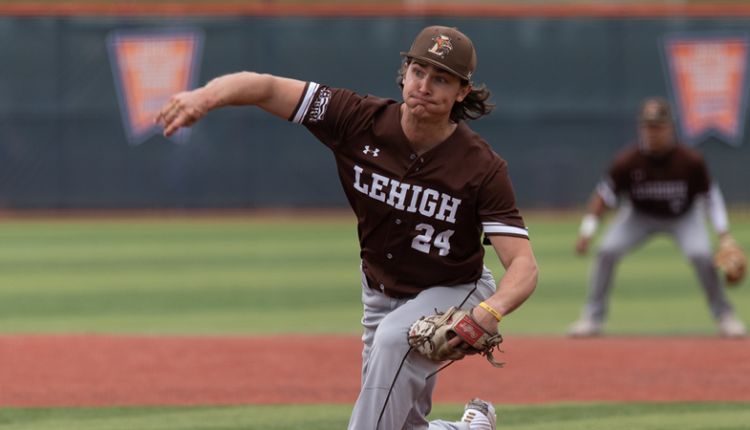 ANNAPOLIS, Md. – The Lehigh baseball team missed their target in attempting a three-game Navy weekend sweep at Max Bishop Stadium on Sunday afternoon, falling 7-2 in the final game of the season streak between the two teams back. The Mountain Hawks (18-15, 14-9 PL) secured the season series on Saturday with two wins over the Midshipmen (14-12, 9-11 PL) at J. David Walker Field and are still looking for that Top position overall in the Patriot League tournament, which starts in two weeks.

Offensive was the difference on Saturday, but on Sunday the Mountain Hawks’ bats fell silent against the Navy pitching as Charlie Connolly completed four strong innings that resulted in only a single deserved run while Trey Braithwaite pitched the final 2.1 innings of relief and only one run allowed for three hits with three strikeouts to seal the victory for the Mids.

After Navy scored the first goal in the lower third of the first goal, newcomer Tyler Young came through with a single through the left side, scoring senior Quinn McKenna, with Young with a throwing error in second and Chase Carlson in third with a separate throwing error advanced the same game.

Compared to Lehigh Lefty Matt Stamford, the Midshipmen scored two points in the bottom third by picking a single and picking a field player to take a 3-1 lead.

The Navy expanded their padding to six runs with an RBI single, a two RBI double, and another RBI single in the lower portion of the fifth to extend the lead to 7-1.

The Mountain Hawks had their best chance of breakthrough in the seventh inning with two outs after Casey Rother, Andrew Nole and Adam Retzbach scored consecutive walks against Jared Leins. When Braithwaite stepped into the game with relief and the bases were loaded, he knocked out Quinn McKenna to end the inning and the threat.

McKenna managed to prevail with an RBI knock in the top of the ninth and two outs after a Rother single and Nole Walk to take a 7-2 Navy lead, but Chase Carlson landed on the second baseman finish in the first pitch the game when the midshipmen prevailed for victory.

Young went to the plate with an RBI 2-for-4 to show Lehigh the way, while McKenna was 1-for-3 with an RBI single, a walk, and a sacrificial motley. Nole went 0-for-2 but took three walks against the Navy pitching. Stamford went three innings, allowing three runs on five hits with two walks, saddled with his first loss of the season.

The Mountain Hawks travel to Fairleigh Dickinson on Wednesday at 3 p.m. for the final non-league competition of the regular season. Lehigh will wrap up the Patriot League game next weekend with three games against Bucknell – two in Lewisburg on Saturday and one at Walker Field on Sunday – before the Patriot League tournament kicks off on May 15.

Go: The Campaign for Lehigh: Forging Ahead – Lehigh University News