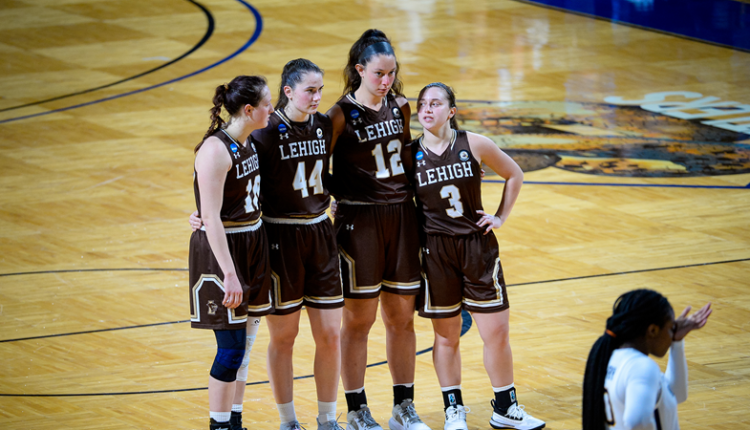 Mountain Hawks’ special season ends in Round of 64 vs. West Virginia

SAN ANTONIO – Despite a strong performance in the first half, a 21-3 run in the final five minutes of the third quarter affected the Lehigh women’s basketball team and fell 77-53 against West on Sunday night at the Bill Greehey Arena on campus Virginia from St. Mary’s University. The Mountain Hawks (10-6) season ends after qualifying for the NCAA tournament as Patriot League Champions for the first time since 2010.

“We’ve been through a lot this year,” said head coach Sue Troyan. “Our girls have shown an incredible amount of endurance all year long and did the same thing today. West Virginia are a very talented team. I thought we fought really hard in the first half and we really competed with them and I thought we did fought the whole thing. ” Game, honestly.

“But they beat us in the second half. Just super proud of our kids, super proud of how they represented Lehigh and our team and how they played together. I couldn’t say enough about them considering what they went through to have.” Season to come here. “

The Mountain Hawks scored the first goal to open the game, taking an early 7-2 lead. However, the mountaineers were able to close the gap and take up to four points as Lehigh used two free throws to reach 15:13 the end of the first 10 minutes.

West Virginia nailed 3 points from Kysre Gondrezick to take a commanding 8 point advantage at 6:30 in the second round, but Lehigh responded with 3 pointers from Frannie Hottinger and Megan Walker to cut the climber lead to to play only two points with 5:11. Hottinger was able to tie the game at 26 with a jumper in the suit, but a 10-0 run at the end of the quarter led the WVU to the locker room at 36-26.

Mountaineers shone the most in the third quarter, despite Lehigh dropping two more 3-pointers from Walker and Mary Clougherty, leading the WVU to eight at 42:34. However, it was a 21: 3 run, a little less than five minutes and 16 unanswered points, with the climbers leading the last frame by 26, 65: 39.

Clougherty started the quarter with a basket from afar, followed by two free throws from Walker to follow up at 21, but the climbers persisted and didn’t let Lehigh get any closer than 18 points as West Virginia held on for the 24-point Win 77-53.

After an MVP performance of the Patriot League tournament, junior striker Emma Grothaus continued her solid postseason by scoring 14 points and seven rebounds at team level, adding two assists and two steals. Frannie Hottinger had 12 points with five boards while Megan Walker added 11 on a trio of 3 pointers. Clair Steele finished with six assists to lead her teammates while Mary Clougherty added nine points on three 3-pointers from the bench.

Lehigh was able to force 19 sales in West Virginia with seven thefts that night.
“Usually our non-conference schedule prepares us for a game like this as we usually play two or three teams that are above our level, but we’ve only gotten to play 15 Patriot League games this season,” said Troyan. “It probably hurt us a little bit when we honestly got into this game. We were with them around the first half and I think it took us a little bit off the pace and the athleticism.

“This was really important to us in terms of growing our program. It’s been 11 years since we’ve been here. It was a huge growth step for our program to win the championship and have a lovely young team experience an NCAA Tournament. We have almost everyone coming back next year. I think this was a really important experience for their development over the next year, which should be one of the top teams in our league and hopefully come back to that stage. “

After coming into the season to finish fourth and enter the Patriot League tournament fourth, the Mountain Hawks exceeded expectations for the entire season, claiming a fourth Patriot League title and appearance at one NCAA tournament.