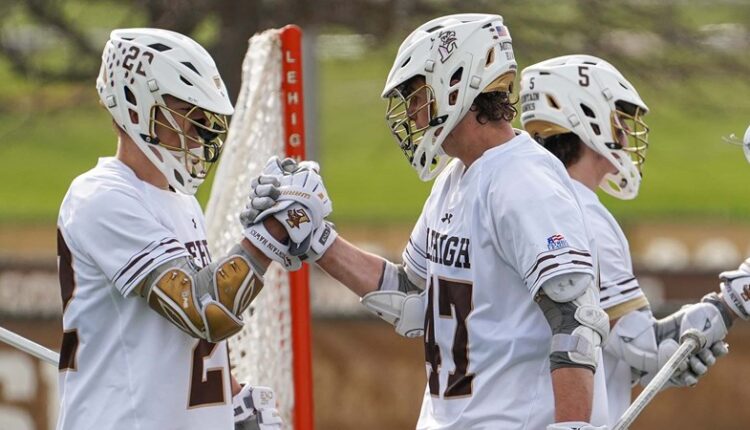 BETHLEHEM, Pennsylvania – The Men of Lehigh’s # 9 lacrosse team is ready for its second season as the Mountain Hawks host Colgate in the Patriot League semi-finals at 4pm on Friday at the Ulrich Sports Complex. With a perfect 8-0 league record, the Mountain Hawks will host the league semi-finals and the championship game for the first time since 2013. Army West Point and Loyola meet at 7 p.m. after Lehigh’s showdown with Colgate. Both games can be seen live nationwide on CBS Sports Network.

Lehigh has advanced to 10 consecutive Patriot League tournaments, the longest active streak in the league. The Mountain Hawks have advanced in five of the last eight championship games this season, winning titles in 2012 and 2013 before losing in the championship game in 2014, 2018 and 2019. Lehigh and Colgate competed in the 2013 and 2018 league tournaments – in semi-finals and quarter-finals – both Mountain Hawk victories.

The Raiders reached the semifinals on Tuesday with an 11-8 win at Boston University. Colgate was 7-4 back but scored six goals in a row in the second half. The Raiders are now 3-6, but all of their losses were competitive, including a 13-11 loss at No. 11 Army West Point in the regular season finals.

Lehigh goes into the postseason with 16: 8 in Villanova after his first defeat of the season. The Wildcats jumped 9-2 at halftime and didn’t want to look back. Two bright spots for the Mountain Hawks were graduate student Conor Gaffney and senior Teddy Leggett, who dwarfed 400 and 200 groundballs, respectively, in their careers. Junior Mike Sisselberger won 20 of 22 faceoffs with eight ground balls, becoming Patriot League Faceoff Specialist of the Week for the fifth time in a row and for the sixth time this season – a new league record. Sisselberger was named the league’s Faceoff Specialist of the Year on Tuesday – Lehigh’s second consecutive award winner (after Gaffney in 2019).

Head coach Kevin Cassese was also named Patriot League Coach of the Year for a second time (along with 2013, the last time the Mountain Hawks were # 1 overall). A total of seven Mountain Hawks All-Patriot League were named, with Junior Tommy Schelling, John Sidorski in the second year and Junior Anthony Tangredi were appointed to the first team.

Lehigh and Colgate met in the regular season, with the Mountain Hawks winning 15-10. After Lehigh took a 4-0 lead, the Raiders even pulled out with five, but Lehigh responded with 10 of the next 12 goals to take a 15-7 lead. The Mountain Hawks have won a total of six straight times and 10 of the last 11 against the Raiders.

Colgate participated in a number of competitive competitions this year. The Raiders were 2-6 in the regular season, but three of the losses were four goals or less, two goals to five, and one to six. Second-team All Patriot League winner Brian Minicus leads Colgate with assists (21) and points (36), while Mike Hawkins is right behind with 18 goals and 11 assists for 29 points. Thomas Colucci won 16 of 22 faceoffs on Tuesday, helping the Raiders to victory.

Colgate leads the all-time series 28-20, but the Mountain Hawks have won 10 of the last 11, starting with winning the 2012 Patriot League Championship in Colgate. The teams have played three times in the postseason since 2012 (also in 2013 in the semi-finals and in 2018 in the quarter-finals). Lehigh’s 15-10 win over the Raiders on March 28 was the Mountain Hawks’ sixth straight win. The last time the two teams played in Lehigh was more than three years ago in the aforementioned semi-finals. Colgate won the first ever meeting between the two schools in 1956. Lehigh’s first win came in 1960 with an 8-6 final.

If the Mountain Hawks win on Friday, they would advance to their third consecutive Patriot League Championship game, facing the winner from Loyola and Army West Point on Sunday at 12 noon

Border Patrol Arrests Over 100 in a Stash House

Freshpet looking for “Fresh in Show” in honor of Shelter Dogs