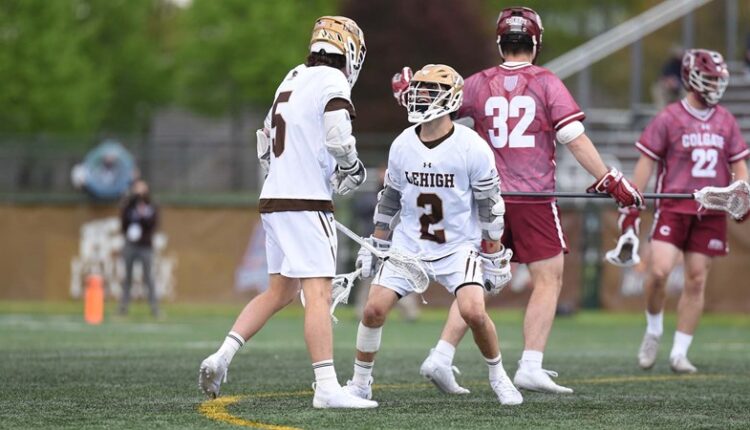 BETHLEHEM, PA. – After early 1-0 and 2-1 deficits, the Lehigh Men’s No. 9 lacrosse team responded with a 13-9 win over Colgate in the Patriot League semi-finals Friday. Towards the end of the second quarter at 7 a.m., Lehigh scored four goals in a row and took the lead 11-7. He didn’t look back. With the win, the Mountain Hawks improve to 10-1 and reach their third Patriot League championship game in a row and sixth place in the last nine seasons.

“Really happy to win,” said Lehigh head coach Kevin Cassese. “I thought our guys put in a really brave performance today. It was a grainy win and it was definitely not clean. We’ll take the win, go on and be happy to be part of it.” Patriot League Championship Game. “

Sophomore John Sidorski ended the offensive with three goals (for his hat trick in his first career) and three assists for a career high of six points. Sophomore Christian Mule ‘had a hat trick while junior Tommy Schelling scored one goal and two assists. Sophomore Justin Tiernan scored the first two goals of the third quarter, which helped the Mountain Hawks break up.

“John Sidorski was excellent tonight and we needed him,” said Cassese. “I think he had a big chip on his shoulder. He played really badly against Villanova last week. He was a strong catalyst for our offense all year and I think he did it.” [last week] Listen. He could learn from it, but also forget it and play well. He did a great job of winning his individual matchup but also making others better once he won that matchup. ”

Proceed to the @PatriotLeague Championship Game! See how it happened … pic.twitter.com/6YdhgV7knD

“I thought our defense did a really good job,” said Cassese. “We were shorthanded back there and they got the stops they need today. I felt like Teddy Leggett did an amazing job bringing us back there. He collected a few groundballs and some rally sales In such games, you have to rely on your upper class and your seniors. “

A 2-1 deficit towards the end of the first quarter and a 3-0 run in the 2:44 period gave the Mountain Hawks a 4-2 lead at the beginning of the second quarter. With the Raiders leveled, goals from freshman Quinn Armstrong (on the extra man), junior Cole Kirst and Mule ‘Lehigh led 7-4, but Colgate had another answer. The Raiders scored the next three to even draw at seven.

Schelling scored a big goal from Sidorski at 1:48 of the second quarter to put the Mountain Hawks 8-7 ahead halfway through before Tiernan opened the second half with goals at 13:46 and 8:28 for a 10- 7 leadership. Graduate student Crew Cintron made it to four late in the verse.

From that point on, the teams traded goals as Mule ‘and Sidorski each added their third game, which was good for the 13-9 final.

The final shots were 38-35 in Lehigh’s favor, while the Mountain Hawks had a 47-38 lead on the groundballs. Junior Mike Sisselberger won 18 out of 25 encounters with 14 groundballs. Twenty-three turnovers and six failed clearings injured Lehigh. Senior goalkeeper James Spence ended the game with nine saves, five of them in the third quarter. Colgate’s Sean Collins made eight.

Next, the Mountain Hawks will host Loyola in 16th place on Sunday afternoon in the Patriot League Championship Game. The game time is set for 12 noon on the CBS Sports Network.

Want a job at the airport? Allentown’s facility is hiring – The Morning Call