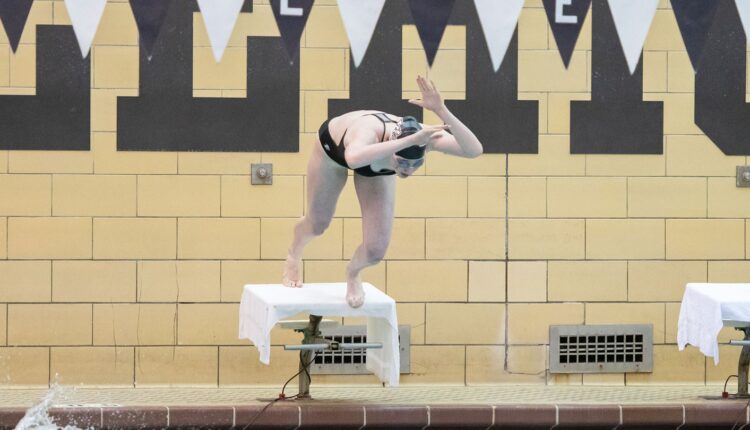 The roar of the fans echoes through the hall. After a quick glance between the participants, swimmers step towards the blocks on each lane next to them. Blow pipes: two short, one long. The official reads the name of the next race. The buzzer sounds and they dive into it.

This is the typical line-up for any single race in a regular season, an NCAA regulated double swim meet.

In the world of COVID-19, very little is considered as typical as it used to be about what has affected athletes’ competitions, even in the most individual sports.

On March 12th, the Mountain Hawks competed against riders in a virtual competition with no spectators.

Instead of racing with their competitors, each team swam with their own teammates in Jacobs Pool.

Although NCAA and Patriot League regulations mandate that referees must lead the competition due to social distancing practices, each team’s coaches directed the meeting from their respective pools.

“There was no real approval process for the virtual meeting,” said Rob Herb, head coach for swimming and diving for men and women. “There is an understanding between the two coaches who compete against each other in the format and how it is to drive without an officer. The two trainers decide and just keep it honest. “

While the changed office process was a seamless adaptation for the coaches, the return to competition has affected the entire team. This meeting marked the first time the Mountain Hawks competed since the Patriot League championships last February before the pandemic.

Second butterfly and freestyler Janik Wing said a year off, even with no personal competition, allowed the team to return to the sport with a newfound sense of gratitude.

“In many ways, since we are back in the water for the first time in over a year, overall morale and motivation was better than before,” said Wing. “I think having that time away made us really appreciate what we have when we have it.”

Due to the lack of personal competition, Herb said, swimmers often compete in time trials and other individually driven races.

“In the world of swimming and diving, scoring can be done at a high level without actually competing against anyone next to you,” said Herb.

Even under these conditions, Herb said he felt the team was as competitive as possible and made the best of the situation.

While three-quarters of the team started as Mountain Hawks again this month, the novice swimmer class has adjusted to competing with a new team in a virtual format.

Freshman Kelsey Thompson hadn’t competed for over a year after her high school championship season was canceled last March. Thompson said this virtual competition was not what she expected her return to racing or her start as a college athlete.

“It was still fun to race again because it’s been over a year since I last raced and just saw where my times were,” said Thompson. “The atmosphere was just different. There wasn’t that much competitive character because I have the feeling that when the other team is there, you’re just pushing yourself harder because you want to win. “

Thompson said both teams tried to keep the meeting as timely as possible.

After each race, the swimmers entered their times in a Google sheet, which was then compared with the other teams. There was a five-minute break between the individual events to enable live scoring. The meeting was also followed on Meet Mobile, an app that delivers real-time results that can be reviewed from anywhere.

“Even after swimming I’d know where I got in with my teammates, but I wouldn’t know how the Rider girls swim,” Thompson said. “You can’t even see who you’re racing against. All you see is these names on Meet Mobile. “

Despite the lack of competitive atmosphere, Wing and other teammates recorded similar times as in the middle of last season.

After a year off, Wing said he was surprised he could come back and be as resilient as when he was training.

“I really thought I was going to fight because I was definitely feeling out of shape,” said Wing. “You know, it was quite surprising to be able to come back and after just three weeks to be able to pass at a level comparable to what I was at last year in the mid-season. I was kind of stunned. “

Despite being the only team in the pool, the lack of spectators contributed to an uneven competitive atmosphere. The team ran a live stream of all events through Zoom, which allowed families and fans to watch the competition.

Herb, Wing and Thompson all said it was comforting to know that the fans were still somewhat present.

“I’m someone who waves to my parents before my race,” said Thomspon. “I feel like it’s just taking away a few nerves. It was just different, not being able to look up at anyone in the stands and seeing people you know. ”

The team also had to change their training schedule to both comply with COVID-19 protocols and train efficiently and safely during a shortened season.

Wing said the team had a week to switch to training during the return, while in a normal year this would be extended by a few weeks or a month to get back on track.

“This year has been a really successful one and we are only just switching but very quickly,” said Wing.

The team is currently training in two training groups to minimize the number of swimmers in the pool at the same time. While this changes team dynamics in some ways, Wing states that an empty pool has advantages.

“We’re getting more space in the lane and actually having the opportunity to have a higher quality practice with fewer people you encounter, ”said Wing.

The Mountain Hawks will compete in a second purely virtual meeting for the Patriot League Championships on April 3rd.

“I actually see this in the future of our sport, where we might be able to play against teams a little further away, and I would hope that it will be more synchronized,” said Herb. “I think this experience can be improved if we familiarize ourselves with it and use it for some more interesting competitors across the country.”