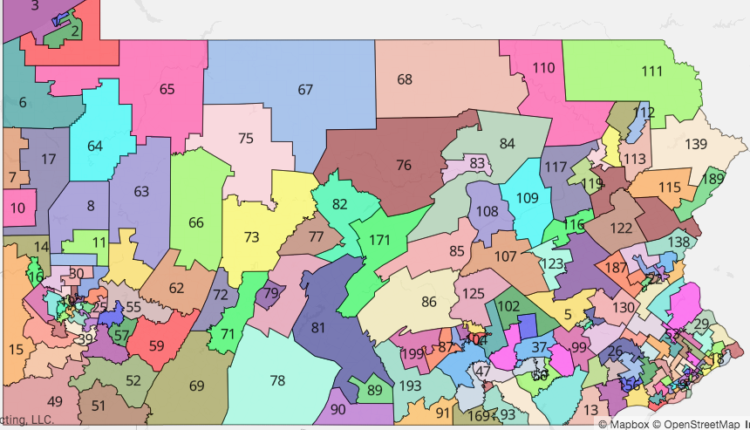 Where years of prodding by citizen activism failed, a month of Republican rage has succeeded in getting the Pennsylvania House to advance a measure to change how the commonwealth draws legislative districts.

In a 15-10 party line vote Monday morning, the House State Government Commission passed a constitutional amendment to create an 11-person commission of political appointees to draw the state’s 203 House districts and 50 Senate districts — though final approval still falls to legislators.

The proposal has a long way to go to become law — the earliest that could happen is spring 2023. But it’s the latest in a run of constitutional changes from Harrisburg Republicans that could reshuffle the balance of power in favor of the General Assembly.

The vote comes after House Republicans, in particular, have criticized a proposed redraw of the chamber by the state’s current legislative redistricting panel.

The map was drawn, using input from House Democrats and Republicans and citizens groups, by chairman Mark Nordenberg after the two parties could not negotiate among themselves.

It pits at least 12 of their incumbents against each other in primaries, increases the number of safe Democratic seats, and overall moves the chamber’s composition closer to the state’s nearly-even political composition.

Under maps drawn in 2013, Republicans currently hold a 110-93 edge in the House. But analysts project that margin would decrease under the new map, potentially even laying the groundwork for a Democratic takeover of the lower chamber.

Pointing to delays in approving a final map, as well as the potential dramatic swing in partisan control, the proposal’s sponsor, State Government Committee Chairperson Seth Grove, R-York, said that the new commission would focus on bringing in citizen testimony in drawing the maps.

The current proposed map “came from the Democrat’s request for a map. That’s why we’re going to a citizen’s commission,” Grove said.

The commission would be made up of eleven members — including eight appointees from the House and Senate floor leads and two appointees elected by the state’s 67 county governments.

The final member must be a retired judge from the Commonwealth Court, the state’s second highest appeals bench.

The commission then must pass a House and Senate map and send it to the respective chambers for approval. Each chamber individually approves or rejects its map with a majority vote. The governor does not sign or veto the new district.

If the commission, which needs a two-thirds majority to approve a proposal, fails at any point, the Legislature can draw and pass their own map.

The proposal would also block the high court from redrawing the legislative districts if the commission and the Legislature can not reach an agreement.

Grove said during the hearing that he wanted the commission to echo his own process on the congressional maps, with the commission selecting a citizen submission and sending it to the Legislature for approval.

Such a process is not laid out in the amendment language. Grove said those details could be handled through statute after the commission passed.

The map was then amended to meet the concerns of GOP committee members before it was passed to the whole House.

This process, Grove said, gave him confidence that lawmakers could take on a greater role in drawing their own lines.

“It’s not  reform, it’s a sham,” Fair Districts Executive Director Carol Kuniholm told the Capital-Star. “It has no hope of being an independent citizens commission.”

Currently, the state’s legislative lines are drawn by the Legislative Reapportionment Commission, which is made up of the House and Senate majority and minority leaders, as well as a fifth chair. The chair is either picked by the leaders, or if they cannot reach an agreement, the state Supreme Court.

The commission has existed since the state’s last constitutional convention in 1968.

At the time, delegates wanted the commission to avoid the trouble of getting 250-plus self-interested parties on board with a single proposal, according to a 2019 law paper on the commission by former GOP House Speaker Mike Turzai, of Allegheny County.

One delegate noted that previous legislative sessions “have clearly indicated that when given such a politically oriented and base issue as apportionment, the legislature will undoubtedly become tied up and impossibly deadlocked in this vital task,” according to Turzai’s paper.

The paper, published after years of lobbying by Fair Districts PA to create a process independent of elected officials, instead concluded that those same officials were the best guardians of a fair map.

“The Commission, as a democratic institution, has proven time and again that it is particularly suited to comprehend all of the various communities of interest across the Commonwealth,” Turzai’s paper concluded.

As a constitutional amendment, Grove’s has many steps to go before it could become law.

The proposed redistricting commission joins a bushel of other proposed amendments, from limits on the governor’s executive orders and regulatory power to voter ID, the Republican-controlled Legislature has considered in the past year to get around Democratic Gov. Tom Wolf’s veto pen.

The panel’s ranking Democrat, Rep. Scott Conklin, of Centre County, said during the meeting that the proposal was a threat to democracy.

He raised concerns that Republicans were once again attempting to govern by constitutional amendment, putting complicated proposals to voters with tricky language to cement their own power.

“It’s not a citizens redistricting commission, it’s a political appointee committee,” Conklin told the Capital-Star. “That is not what the people are asking for.”

He instead called for a commission appointed by lottery from interested applicants, similar to what Fair Districts has called for. Such a commission “scares the bejesus out of both parties,” Conklin said.