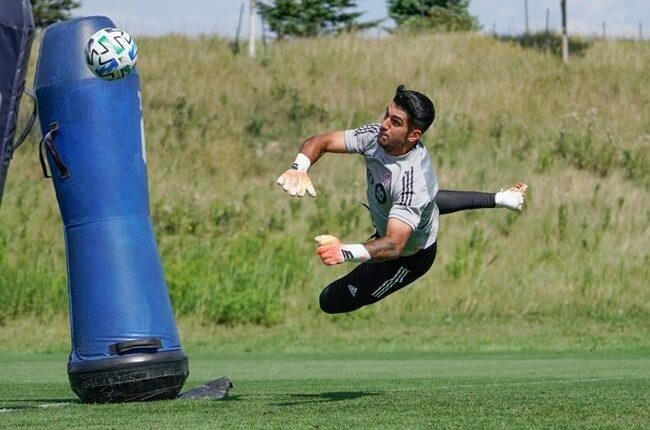 TORONTO – Kevin Silva can thank teenage baby fat for a step that helped make soccer a career. “I actually grew up as a striker,” he explained.

“I actually grew up as a striker,” he explained. “I was a little chubby growing up so the next man to walk in is always the chubby guy when one of our goalkeepers went down.

“I played the game, I really enjoyed it. From then on I thought, ‘Yeah, I’ll be a goalkeeper.’ It turned out to be a minor blessing. “

Silva was then 12 or 13 years old. Today, the 22-year-old from Bethlehem, Pennsylvania is six feet tall, weighs just 150 pounds and is Toronto FC’s third goalkeeper.

“I would say it’s a great strength in my game,” he said. “Growing up and playing on the (outdoor) field helped me feel comfortable with the ball at my feet. And growing up in my old PDA (Players Development Academy in Somerset, NJ) my trainer (Tyler Stakiwicz, now an assistant at Rutgers University) knew very well what was going on in the new goalkeeping era and wanted to incorporate that into my game very early on as soon as I got there.

“I think it was something that helped me a lot. I appreciate it very much. I didn’t really understand why he wanted that at that age. But it has helped and helped me pay off. I enjoy having the ball at my feet. I understand that there is only one extra player on the field for the team. “

After loaning part of 2019 from Scotland’s Hearts to Toronto FC 2, Silva made a permanent move to TFC’s reserve team in January before signing a first-team contract ahead of the MLS back tournament in Florida in July.

Toronto coach Greg Vanney, while acknowledging the role of the third “keeper,” especially given COVID-19 is limiting opportunities in lower leagues, says Silva has bowed her head, kept working and improved.

“He’s very competent, almost like an outfield player,” he added. “So that was nice … And he’s a really good communicator. Feels secure in communication and leadership. And he’s a good goalkeeper. There are things (goalkeeping coach) Jon Conway and the goalkeeping team are working on to help him But he’s a really good guy, a really hard worker and he fits in really well with our group. “

Prior to joining Toronto FC II, Silva made five appearances for the Heart of Midlothian FC reserve team in 2018 and was later loaned to Raith Rovers FC from the Scottish Third Division.

Silva played collegially at UCLA and played in 30 games with seven goals conceded in two seasons. He then switched to Rutgers but never saw anything. He moved to Scotland where he spent about 18 months.

Despite restrictions due to the pandemic, Silva says he is enjoying his time as a Toronto FC player. He believes the MLS team’s style of play suits his skills better. And he learns through training alongside Westberg and Alex Bono.

“They drive me every day and really help me focus on little things that I need to correct. Exercising with them and learning from them was really fun … I am really blessed to be a part of this group too be.”

Silva is number 90, a number he was given when he moved to TFC 2. He had hoped to get the number 99 with the first team but striker Ifunanyachi Achara beat him.

Silva and Toronto FC returned to their pandemic home in East Hartford, Connecticut on Wednesday after a few days at home. Toronto “hosts” the Philadelphia Union in an 8-2-4 club bout at Pratt & Whitney Stadium on Rentschler Field on Saturday.

This report by The Canadian Press was first published on September 30, 2020