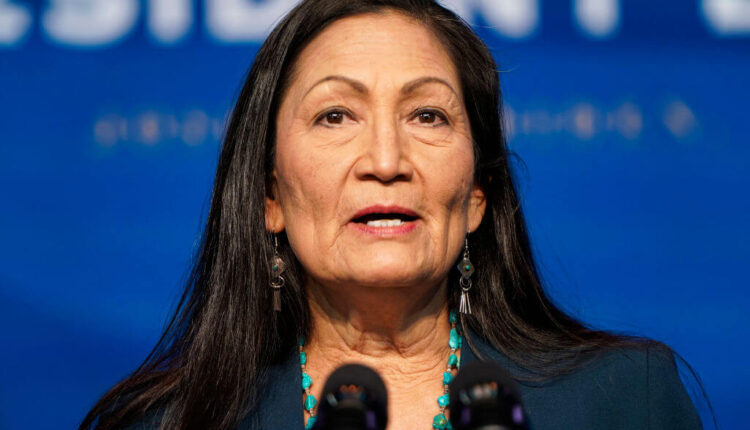 WILMINGTON, DE – DECEMBER 19: Nominee for Secretary of Interior, Congresswoman Deb Haaland, speaks after President-elect Joe Biden announced his climate and energy appointments at the Queen theater on December 19, 2020 in Wilmington, Delaware. Haaland is the first Native American nominated to serve on the presidential cabinet. (Photo by Joshua Roberts/Getty Images)

WASHINGTON — The Native American children travelled on trains, thousands of miles from their homes, to Pennsylvania’s Carlisle Indian Industrial School in the late 1800s and early 1900s. Many had been forcibly taken from their parents and communities.

Once there, they had to hand over their belongings, put on uniforms, cut off their braids, adopt new names and abandon their languages and cultural practices.

Under teachers in charge of assimilation, the children studied English and memorized the U.S. presidents. The rest of the time, they worked on the school grounds or on assignments in neighboring towns.

Some tried to run away. Some married. A few, like Olympic gold medalist Jim Thorpe, had renowned sports careers.

And some never came home, the victims of disease and poor health care, lost to their families. Last month, the Army began disinterring from a military cemetery the remains of 10 children who died between 1880 and 1910 while attending the Pennsylvania school, returning them to their relatives for burial.

The federal government conducted a large-scale drive over nearly a century to assimilate hundreds of thousands of Native American children by removing them from their families and sending them to faraway boarding schools—a painful chapter of U.S. history that Interior Secretary Deb Haaland has directed her agency to investigate.

Haaland, a former member of Congress from New Mexico, is the nation’s first Native American Cabinet secretary and an enrolled member of the Pueblo of Laguna.

Last month, Haaland ordered a federal Indian Boarding School Initiative to recover the histories of the institutions, where she says children endured routine injury and abuse. Native American leaders say the investigation represents a huge step toward acknowledging a devastating loss that has been overlooked by those outside their communities.

In her memo, Haaland said she wants the U.S. investigation to identify the children who attended and their tribal affiliations, along with a particular emphasis on finding records of cemeteries or burial sites connected with the schools that may contain unidentified human remains.

Federally run off-reservation schools dotted the West and Midwest, from Arizona to Montana to Michigan to Wisconsin, according to a map created by Dickinson University for a digital resource center for the Carlisle school.

Some advocates want Congress to take the next step and create a formal truth commission. Sen. Elizabeth Warren, D-Mass., in the coming weeks plans to reintroduce legislation forming one.

“Our people were forcefully removed from their homes and families, placed into the boarding school system, and stripped of their identity as Navajo people to assimilate them,” Navajo Nation President Jonathan Nez said in a statement. “This troubling history deserves more attention to raise awareness and to educate others about the atrocities that our people experienced, so that they can better understand our society today and work together to heal and move forward.”

Haaland now leads the agency that was responsible for many of the schools. And she has her own direct ties to them. “I am a product of these horrific assimilation policies,” she wrote in a Washington Post op-ed. Her great-grandfather was  removed from his family and sent to Carlisle.

“I know that this process will be long and difficult,” Haaland said in remarks to a virtual conference of the National Congress of American Indians when she announced the initiative last month.

“I know that this process will be painful. It won’t undo the heartbreak and loss that so many of us feel. But only by acknowledging the past can we work toward a future that we’re all proud to embrace.”

‘Kill the Indian, save the man’

Thousands of students from more than 140 Native American tribes attended the Carlisle Indian Industrial School in its 39 years in operation in southern Pennsylvania. Opened in 1879, it was the first government-run, off-reservation boarding school for Native Americans.

Its founder, Civil War veteran Lt. Col. Richard Henry Pratt, brought a militaristic approach to assimilating Native American children. Pratt said in a speech in 1892: “Kill the Indian in him, and save the man.” His model was to take children at a young age, far from their family, and eradicate their culture.

“One of the main goals was to disrupt the family bonds, the cultural bonds, the language bonds, that’s why you have so many of these schools in so many different places,” said Katrina Phillips, an assistant professor of American and Native American history at Macalester College and a member of the Red Cliff Band of Lake Superior Ojibwe.

Pratt also saw the schools as a way to assert control over adults in tribes. In a letter he wrote in 1879 to the Commissioner of Indian Affairs, Pratt said he took the children of tribal leaders to the school because their parents “will be restrained by that fact and invited to seek for themselves a better state of civilization.”

The federal government opened 25 federal off-reservation boarding schools. There were more than 300 other schools run by religious groups with support from the government. The schools operated from the late 1800s to the 1960s.  The federal government still oversees four off-reservation boarding schools, but families now send their children by choice. The current schools include Native American language and cultural education.

Their days, modeled on Carlisle, were very rigid and militaristic, according to Eric Anderson, who has studied the boarding schools as professor and chair of Indigenous and American Indian Studies at Haskell Indian Nations University in Lawrence, Kansas. The university is on the site of a former boarding school. 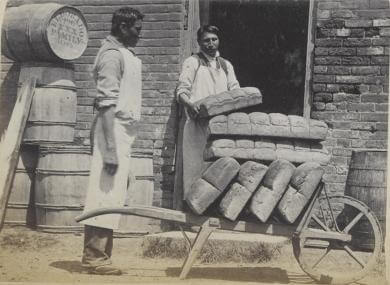 Students Samuel High Bear and Guy (Bear Don’t Scare) working at the bakery. This is a posed photo of them loading loaves of bread on a wheelbarrow outside the bakery (Source:Carlisle Indian School Digital Resource Center).

“Every day things were very ordered, with half a day in classes … and the other half in manual instruction or manual labor of some kind,” said Anderson, an enrolled member of the Citizen Potawatomi Nation. “It was a very limited education.”

In many cases, living conditions were harsh and disease could spread in the residential schools.

The federal government opened the Stewart Indian School in Carson City, Nev., in 1890. In January 1891, an outbreak of mumps affected most of the student body. And an early promotional newspaper from the Carlisle School in November 1880 admitted that “last winter the boys suffered greatly from the varying temperatures of their quarters.”

Halaand’s announcement came amidst two discoveries of mass graves near defunct boarding schools in Canada. She said she was “sick to my stomach” reading news reports about the newly found graves.

The Canadian schools were modeled on those in the United States, but the U.S. government is trailing behind Canada in its investigation. The Canadian government started a truth and reconciliation commission in 2008 to address the legacy of the boarding schools.

Haaland’s memorandum directs the Interior Department to collect historical records, consult with tribes, and deliver a report by next spring.

“Survivors of the traumas of boarding school policies carried their memories into adulthood as they became the aunts and uncles, parents, and grandparents to subsequent generations,” Haaland wrote in her memo. “The loss of those who did not return left an enduring need in their families for answers that, in many cases, were never provided.”

Native American advocates said the action is welcome, but more is needed.

“It is a great thing to finally have some movement from the federal government because we have been trying to get answers to what happened to children taken away to boarding schools for generations, really,” said Christine Diindiisi McCleave, CEO of the National Native American Boarding School Healing Coalition, a nonprofit that Native American groups formed a decade ago. “This is a good first step in the federal government acknowledging this genocidal policy.”

McCleave, an enrolled citizen of the Turtle Mountain Ojibwe Nation, said the next step should be the creation of a “federal truth commission” that could collect testimony from survivors.

Haaland, as a member of Congress, with Warren introduced legislation that would create a commission to investigate, document and acknowledge past injustices of the federal government’s Indian boarding school policy.

Aides for Warren said she is working with partners and plans to reintroduce the bill in the coming weeks.

Last year, the bill had just 17 cosponsors in the House and two in the Senate: Democratic Sens. Jeff Merkley of Oregon and Tina Smith of Minnesota.

McCleave said her group expects the legislation to get more attention this year.

In the meantime, Native Americans say they are both grieving and holding onto their strengths.

“One thing we have to keep in mind, front and center, is despite all of the attempts to rip away everything, we are still here. And as hard hit as language and ceremony and culture and identity has been, they weren’t able to erase it. It still remains,” said Anderson.

Allison Winter is a Washington D.C.-based correspondent for States Newsroom, which supports the .

Pa. families can opt for an additional year of learning. What to know before July 15 deadline