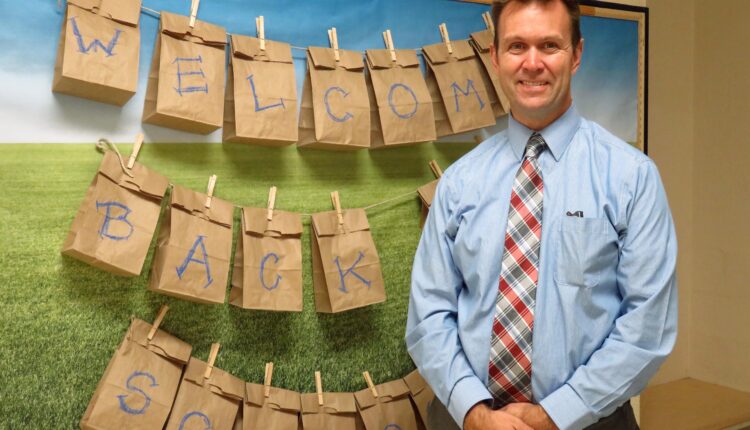 Timothy Blake is excited to be back in his hometown of Dennis after 20 years in education. He returned this fall as the new director of the Nathaniel H. Wixon School. He replaces Sean Owen.

Blake, 42, grew up in Dennis Port, graduated from Dennis-Yarmouth Regional High School and then attended Moravian College in Bethlehem, Penn. He returned to Massachusetts, where he became a teacher and principal in schools on the south and north coasts. During this time he earned his Masters degree from Boston University and the Certificate of Advanced Graduate Studies from Cambridge College.

“It’s exciting to be back,” he said in an interview this week after escorting the school’s 500 students onto their buses at the end of the school day. “It’s a good transition for my family. Lots of people make us feel welcome. “

Blake’s wife, Katelyn, and three boys in three different grades of the DY school system moved from Lowell to the Cape. They currently live in a rental home on West Yarmouth Beach until they decide where to live permanently, he said.

Blake began his career as a teacher in Norton and assistant principal in Taunton. The family then moved north to his wife’s hometown, where he was Headmaster in Medford for four years and in Leominster for the last seven years. He said he was happy with his job at Leominster, but when the opportunity arose to join Dennis, he and his wife said that he believed “the time was right”.

He had a role model as an educator in his mother Jean Blake, who taught at Ezra Baker Elementary School for 37 years. He brought her with him when he was introduced to the DY school committee. People asked him, “Are you Jean’s son?” he said.

One of the fun and rewarding aspects of being the headmaster, Blake said, is seeing “people switch careers because they love it.”

He sees the challenge of a 4th and 5th grade in the fact that all children in the school system come together for the first time. “The children and parents are nervous,” he says, but sees that the young students quickly get used to their new situation.

“I want to make sure that school is a place that everyone can proudly send their children to,” he said, “and make them a school that everyone would like to be at.”

Blake said he would also welcome a future new school that would combine Wixon and Mattacheese Middle School in Yarmouth in a new building on Station Avenue in South Yarmouth. The plans have been developed by a special committee over the past year and a half, and the Dennis Yarmouth School Committee is holding a district vote on the project for December 4th. The plan is to run the combined school with two administrators, he said.

“A new building would be nice,” said Blake, noting that the 40-year-old Wixon School has some structural and aesthetic flaws that need improvement.

Electricians charged with killing boss, 2 others in attack: police

Electricians charged with killing boss, 2 others in attack:…