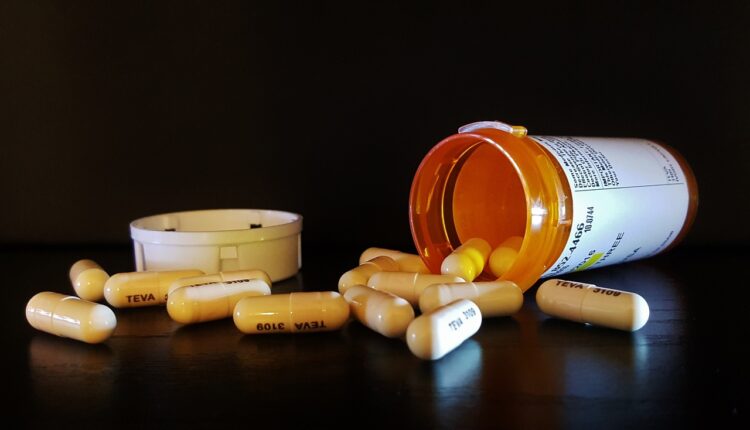 With a rise in overdose deaths, how is Pa. combating the opioid epidemic?

Preliminary data from the state Department of Health show 4,715 overdose deaths in 2020. That’s a 14 percent increase from the year before. Forty-six out of 66 counties in Pennsylvania saw a rise in cases, and officials anticipate more as numbers become final.

Experts have linked the coronavirus and subsequent mitigation efforts to a nationwide rise in overdoses, citing restricted in-person treatment, a decline in hospital visits, and limited community resources. Pennsylvania health experts said the commonwealth is no exception.

“COVID was really hard on everybody,” Dr. Carrie Thomas Goetz, an epidemiologist who works with the state Prescription Drug Monitoring Program, said Tuesday — identifying a potential cause for the increase. “There [were] a lot of challenges for the general public, for the health care setting, getting connections to care, connections to treatment.”

Democratic Gov. Tom Wolf has made the opioid and heroin overdose epidemic a priority for his administration. The declaration has been renewed 14 times and is set to expire on Aug. 5, according to the Pennsylvania Emergency Management Agency. But, efforts to address addiction and substance use are still underway.

Preliminary data from the state Department of Health show a 14 percent increase in overdose deaths in 2020, compared to 4,458 deaths the year before.

On Tuesday, state health officials and board members from the statewide monitoring group, Achieving Better Care by Monitoring All Prescription Program (ABC-MAP), met to discuss statewide response to the opioids crisis and overdose surveillance.

And while Pennsylvania has seen a rise in overdose deaths, officials believe community-based intervention efforts, such as intervention training and education initiatives, are making strides to reach those in need.

Despite the pandemic, statewide education-based initiatives for health providers and first responders saw a steady increase in participation, said Ashley Bolton, the director of the state Office of Drug Surveillance and Misuse Prevention.

Though it’s still in its first year of operation, the first-responder training program has carried out 79 sessions — accounting for 1,213 trained public safety professionals and first responders to date, Bolton said.

Since the prevention program launched, Pennsylvania has seen a respective 40 percent decline and 28 percent decline in opioid and benzodiazepine prescribing, Bolton said.

“We know that there are a lot of resources for patients with substance-use disorder, and we’re connecting accordingly,” Bolton said, addressing shortcomings when it comes to responding to communities with varied needs. “But we still struggle and are facing barriers with connection to treatment for chronic pain patients, understanding that there are long wait times to be reestablished for the chronic pain provider.”

She added: “Risk of overdose is high with both populations, so we continue to seek opportunities to connect both patient populations to the care that they need.” 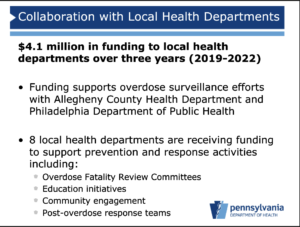 Over the last two years and into 2022, the state has provided more than $4 million in funding to 10 health departments across Pennsylvania to help with prevention and surveillance initiatives.

Over the last two years and into 2022, the state has provided more than $4 million in funding to 10 health departments across Pennsylvania to help with prevention and surveillance initiatives, including efforts in Allegheny and Philadelphia counties to support prevention and response.

The Wilkes-Barre City Health Department, in partnership with the Lackawanna and Luzerne County Medical Societies, used state funds to launch “Life and…” — a podcast that focuses on substance-use disorder and stigma.

“The beauty and value of this initiative is that every locality is different, and we are supporting programs that make sense for the communities these health departments represent,” Bolton said.