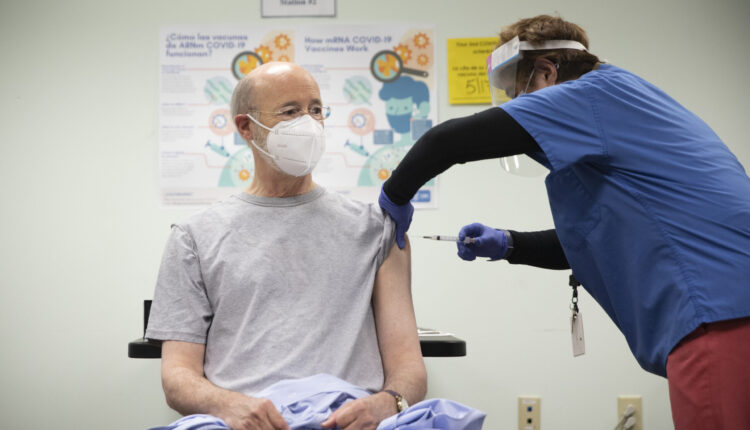 With $370M in COVID relief to spend, Wolf looking at vaccine incentives

Gov. Tom Wolf is in tight-lipped negotiations with legislators, particularly his fellow Democrats, over how to spend $370 million in federal stimulus money allocated to his office for “pandemic response” — with few strings attached.

The money is just a small fraction of the $7.3 billion in federal aid Pennsylvania received from the American Rescue Plan. And it was little noted by either the Legislature or the governor in their public comments when the state’s $40 billion spending plan passed in June.

But in a time of fiercely divided government, it gives Harrisburg Democrats a rare chance to set their own spending priorities.

It’s still unclear how the administration plans to spend the money. Asked Tuesday, Wolf said “we still are working on how to get that out.”

But Wolf went on to suggest that he was interested in using the money to incentivize skeptics to get vaccinated.

Pennsylvania’s vaccination rate is currently hovering around 60 percent, and the number of people who are fully vaccinated in recent weeks has slowed.

Speaking at a press conference on a separate vaccine initiative, Wolf cited President Joe Biden’s suggestion that states give vaccinated individuals $100 as an example. Wolf said early math indicated that could cost as much as $80 million.

Sen. Vincent Hughes, the ranking Democrat on the Senate Appropriations Committee, told the Capital-Star that he agreed with Wolf’s thinking to encourage vaccinations.

“That I think that makes absolute sense,” Hughes, of Philadelphia, said. “We’ve got to shut this virus down.”

The unrestricted nature of the funds has concerned some, such as Nathan Benefield, executive director of the Commonwealth Foundation, a Harrisburg-based, free-market think tank.

“While we’ve unfortunately become used to convoluted earmarks being used to send public funds to individual interests across the state—a problem that our analysis shows surging this year—it’s rare to see a new appropriation of this amount without any language at all,” Benefield said. “Lawmakers and the governor should clarify what this money is to be used for.”

A more detailed plan could be forthcoming. House Speaker Bryan Cutler, R-Lancaster, told the Capital-Star this week he was meeting with Wolf on Thursday, and expected the $370 million would be part of their conversation.

Cutler did not say if he had any specific hopes for the money other than returning Pennsylvania to pre-pandemic normalcy.

This request follows lawmakers in both parties offering spending proposals throughout the spring to use chunks of the state’s $7.3 billion in COVID relief on grants to concert venues, veterans’ service providers, gyms, and fire and ambulance services.

Legislative Democrats also revealed wide ranging plans — known as the “Pennsylvania Rescue Plan” in the House, and the “New Deal for Pennsylvania” in the Senate — to spend those stimulus dollars on an array of programs ranging from paid family leave and expanded broadband access to health care research and lead remediation in schools.

But none of these proposals for direct monetary aid ended up in the final budget, negotiated between Wolf and the Republican legislative leadership.

The budget did authorize a smattering of tax credits for a select, few industries, as well as a $282 million investment into nursing homes.

“The one thing the last year and half has told us is that we need to be prepared,” Cutler said Wednesday. “That’s one of the reasons we put so much back into savings.”

To spend or not to spend, Harrisburg asks this budget season

The state has consistently had higher expenses, driven by Medicaid spending and other entitlements, than revenues for the last few years. Those yearly structural deficits are projected to expand in the coming years to as large as a multi-billion dollar shortfall by 2026.

Still, legislative Democrats criticized squirreling away funding for the future with so many unmet needs today.

“That money was designed largely by the federal government to help people and support folks, and the fact that it’s sitting there unspent is the real policy crime that all of us need to be focused on,” Hughes said.

Hughes expressed some optimism that the $370 million gives Wolf and Democrats a second chance to implement a miniature version of their plans for the stimulus funding.

“That is the guiding principle that we are operating off from, trying to get as many of those priorities addressed in as substantive a way as possible,” Hughes said.