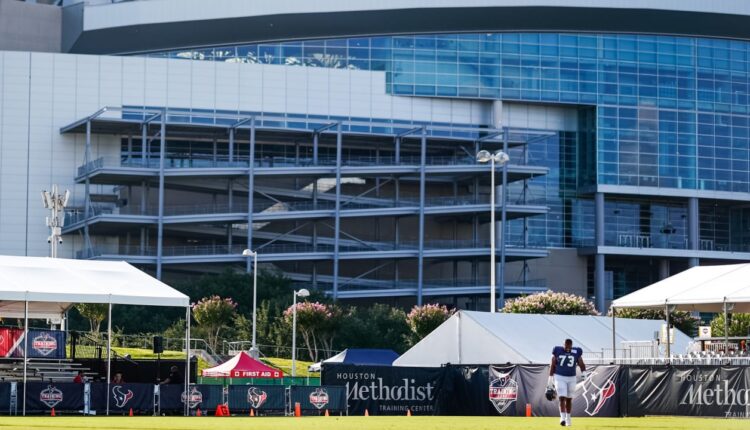 “I’m doing research on the weather in Texas. When I got out of the NRG (stadium) this morning, my glasses were fogged up and if they fogged up, it wasn’t the first time they’d fogged up. But then I noticed when I was in Philly, we went to Lehigh University, and we actually had to go to training, and when you saw the fog and clouds and suddenly you knew that training day was going to be nice, I am expecting today, but I have this one Guys already made it aware. “

General Manager Nick Caserio said today that QB Deshaun Watson will not be traveling to Green Bay. Could you talk about it?

“Well, like I said, it’s day after day with him. He’s been out for a while and he was back today. We just take it day after day, like we did from the start of training camp.”

How do you decide whether or not to travel to a preseason game?

“We haven’t made this decision yet about who will travel and who will not. We will probably make that decision on Thursday and continue from there.”

What goes into this decision?

“Injuries – there are some guys who we sit down and decide whether we want to play them or not. That doesn’t mean they don’t travel to the game, but they can’t play in the game.”

Can you explain the decision not to allow QB Deshaun Watson to travel to Green Bay?

“He’s unlikely to be involved in the game. We’ll make a decision later in the week about what will happen to it.”

Is that based on QB Deshaun Watson’s injury?

“Well, it’s based on the fact that in practice he had limited repetitions and things like that.”

Do you expect QB Deshaun Watson to play at all this preseason?

Last week you mentioned DL Maliek Collins. What do you like so much about his game?

“Again, when you have a defensive lineman who plays the way he plays the game, it seeps through to everyone else on the defensive. He’s like what we say he’s an all-out player. He is outside all the time. it’s almost. and often when you do, good things happen as a player. “

How valuable is it for you as a coach to see QB Davis Mills and WR Nico Collins in a game setting?

“I look forward to seeing not just them, but all of our newbies that we have. And there are a lot of people on this team that we haven’t seen yet that we can see, and we’re “looking forward to all of these guys.”

What do you think of where QB Davis Mills and WR Nico Collins are as third-round picks?

“Again, it’s in training camp to find out. You did a good job in training camp. As you said, it was a very competitive situation with these guys throughout the training camp and they were on par with the point of competing every day and not to let it get too big for them. “

What about the rookies on the defensive end like LB Garret Wallow and DL Roy Lopez?

How much improvement have you seen at QB Davis Mills?

“Every day in training he gets better and better. Just like Jeff (Driskel), Tyrod (Taylor), all of these guys. Every day they get better and better. As a coach, it gave me a lot of encouragement to see us, especially offensively, how we were progressing in terms of the penalty shoot-out and our pace is a little faster. That was so encouraging yesterday. It was the first time in this training camp that I saw this consistently from the beginning of the training until the end of the training, and it was the first time that I left training and said that I want to see this. “

How is TE Brevin Jordan doing?

How is the defensive doing so far?

“Well, in the competition with this group, the guys can’t come to practice every day and not have their A game with you. Once there, these guys are all fighting for positions. And the competition out here in training ensures that all these guys get better and better. “

What are the things you saw from QB Davis Mills that fit him on this offensive?

“He would fit into any offensive from the standpoint of this league. We knew when we designed him what we were getting. He didn’t do the things we wanted and he is making progress every day.” and get there. “

What would you specifically like to see from QB Davis Mills this preseason?

“More consistency in the offense.”

As a coach, what do you pay most attention to in the first game of the pre-season?

“I want to see how they perform in the game-like situations. We weren’t that yet. Our scrimmage was actually a fabricated type of scrimmage. This, I mean, it’s live. It will be the first time. “Except for the goal line that we made where it will be live.”

Is there anything you learned about yourself or the coaches at training camp that you would like to improve?

“Again, the thing that is going to happen in that first preseason game is the first time that we as employees will be able to do the game day thing about how we deal with things, what happens from the press” Box, communication. And that kind of thing will be the first time this group is all together to do this. “

Will your coordinators be there?

What does it say about Davis Mills that he recovered so well after having bad reps all day?

“That he has the right stuff that a quarterback has to have because there will be bad games. Not only will there be bad games, but there will be bad series too. I’ll come back to what happened in training yesterday. When we were in training yesterday and three groups were running and our pace was getting faster and faster, the front guys we got up there, that’s all a reflection of what happened to the quarterback at his pace. He did yesterday just like Jeff (Driskel) showed that Tyrod (Taylor) had a really good pace because we were doing some up-tempo stuff, and when these two guys got up there you could suddenly see the same pace, and it showed in the success that we have consistently had. “