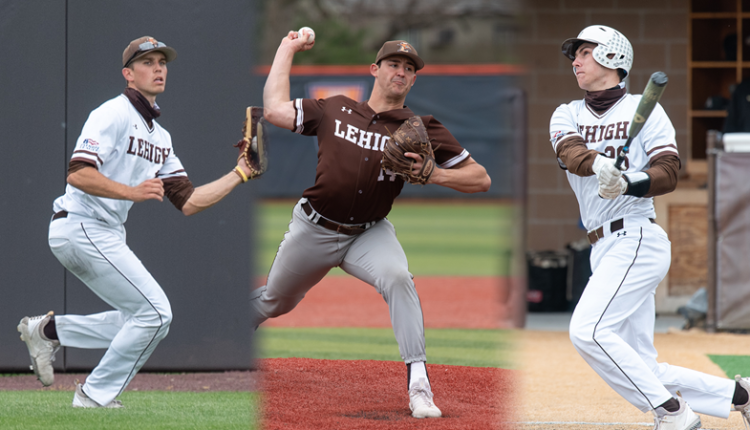 BETHLEHEM, PA. – Three members of the Lehigh Baseball program continued to be honored prior to the start of the Patriot League tournament this weekend and named All-Patriot League academic selections for the 2021 season. Senior Eric Cichocki, Junior Mason Black and sophomore Adam Retzbach each received the highest academic awards this year.

Only 12 players in the Patriot League are elected to the team as athletes have a cumulative GPA of at least 3.20 and must be a starter or key player in their sport to qualify.

This is the fifth season in a row that three Mountain Hawks have been selected as the Academic All-Patriot League and are leaders among all league teams.

Cichocki is a mechanical engineering and IBE finance major and is named to the Academic All-Patriot League for the first time. A native of Zionsville, Pennsylvania, earned a GPA of 3.94 during his career with Lehigh. In 2021, Cichocki scored .323 / .451 / .430 with nine doubles, two homers, 15 walks and 32 runs. He was a staple at the top all season, stole nine bases and got hit by a pitch ten times. On the field, Cichocki made one spectacular catch after another, posting 63 putouts with two assists for a fielding percentage of 0.985. He was then named one of Lehigh’s five First Team All-Patriot League selections.

Black ended his spectacular junior season with the Patriot League Pitcher of the Year and the First Team All-Patriot League award after setting a 7-2 record with 2.51 ERA and 90 strikeouts and the league in all three categories led into the postseason. He has six games with 10 or more spikes and four full games with two direct exclusions to end the season. Overall, he has held clubs to a batting average of 0.213 and is 6-1 with an ERA of 2.55 and 68 strokes in league competitions. In the classroom, Black is studying bioengineering and has earned a cumulative GPA of 3.80.

Retzbach finished the regular season as a member of the second team of the All-Patriot League and appeared at the end of the year as a constant threat to power in the line-up of the Mountain Hawks. He scored with nine doubles and two triple hits .246 and finished the home lead with five doubles. He drove in 25 runs and scored 17 goals. Retzbach hit .462 with a base percentage of .340. Academically, Retzbach belongs to the University of Arts and Sciences and has a cumulative GPA of 3.92.

The Mountain Hawks are hosting the Navy this weekend for the Patriot League semi-finals at J. David Walker Field, a best-of-three series to determine who will advance to the Patriot League Championship series. The double header on Saturday starts at 12 noon and will be broadcast live on ESPN +. The third game on Sunday will be played if necessary.