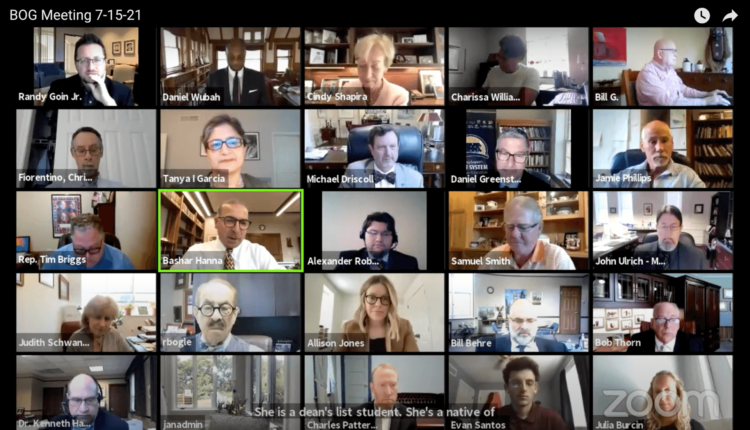 One day after approving the consolidation of six universities, the Pennsylvania State System of Higher Education (PASSHE) Board of Governors on Thursday outlined the framework for one-time funds, hoping to address system shortfalls and enhance future access.

Before integrating Bloomsburg, Lock Haven, and Mansfield universities; and California, Clarion, and Edinboro into two, regional campuses, board members reiterated that redesign was just a step toward improving the overall State System.

And with $25.1 million from State Employees Retirement System savings and $50 million in federal American Rescue Plan funds as part of the recently approved state budget, the State System’s primary use for the one-time money is to advance redesign and invest in the integrated campuses.

“We’ve been working on all of these things for really the last three years and in many cases, more,” State System Chancellor Daniel Greenstein said.

A more comprehensive spending plan will be presented at the October board meeting, but here’s the preliminary breakdown for how the State System expects to use the funds:

Under the unanimously approved consolidation plan, each of the six campuses will remain open and offer residential services, but they’ll operate under different names. Since students will be attending classes across campuses, online learning and hybrid instruction is likely, which also will contribute to layoffs.

Though the overall impact of integration has yet to be seen, Greenstein said it’s estimated that $15 million will help launch the process and set campuses up for success.

$15 million to support the transition to sustainable operations

During Thursday’s board meeting, members approved an appropriation  to address inconsistencies in funding between five institutions that was a result of a 2018 decision to freeze the formula used to allocate funds to state schools.

The allocation formula is still under review, but the appropriation addresses the difference in funding between schools since the formula was last used. But $15 million is still earmarked to help schools reach their sustainability goals, he said — adding that additional funding in this category will be used to address staffing changes.

Debt relief is especially a priority for integrating western schools, Greenstein said, that aren’t able to pay off debt from residence halls through the number of residents alone.

This one-time relief will bring those schools closer to achieving sustainable operations.

The State System will use some of these funds to diversify the general education curriculum, and to address race relations on campuses, Greenstein said.

This work is also being carried out through new State System diversity, equity, and inclusion policies.

A portion of these funds will help establish a system information database, so students can learn more about courses and enroll in classes across other state-owned universities, Greenstein said. He added that the State System has already contracted with a provider to create the system this year.

Some funding earmarked for infrastructure will also be used to market the State System to promote education to prospective students.

This money will be used to invest in non-degree credentials through partnerships with employers and community colleges.

For additional support, the State System earmarked $2.5 million in funding.